It was a stressful, painful and humiliating experience for the mostly African immigrants who came to support Saron Gebresellassi and participate in the Canadian political process for the first time 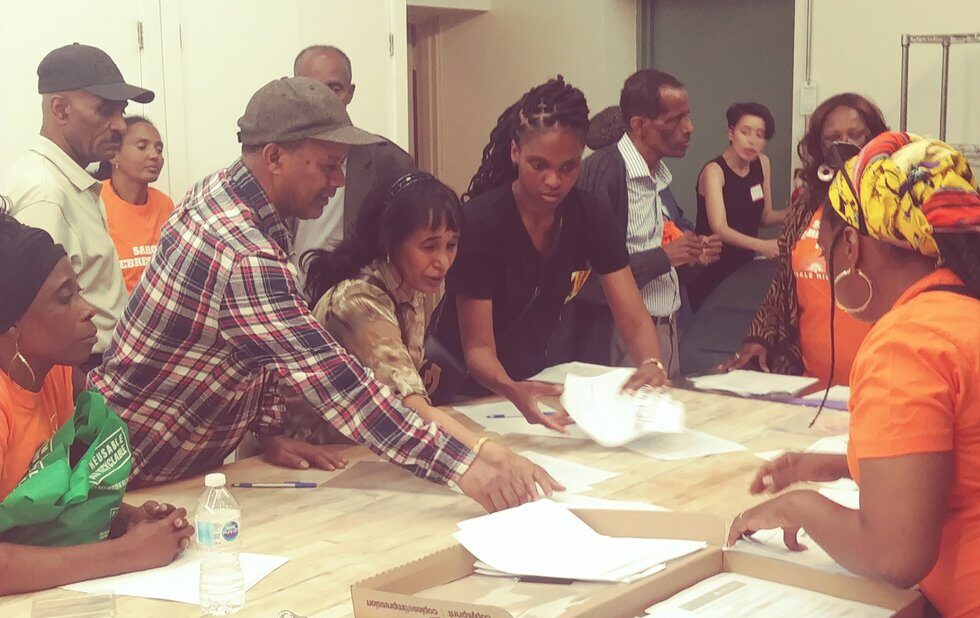 Few NDP nominations for the upcoming fall federal election have been seriously contested in Toronto.

The three candidates had rather different bases of support.

Parkin counted mainly on the support of what might be called the party’s old guard. Gebresellassi, who had no backing from the party establishment, focused on recruiting new members, in particular those less familiar with party politics: non-voters, new Canadians and Toronto Community Housing residents.

Taylor, on the other hand, presented himself as a candidate acceptable to both the establishment and the party’s left wing.

He had the backing of area councillor Gord Perks, former Parkdale-High Park NDP MPP Cheri DiNovo, virtually the entire executive of the riding association and other big names like Naomi Klein.

However, what the riding association executive hoped would be a smooth nomination meeting turned out to be anything but.

Taylor prevailed with a majority, having drawn an enthusiastic crowd out to vote. But there’s more to the narrative than the version of the Parkdale-High Park NDP uniting behind its nominee.

The mostly African immigrants who came to support Gebresellassi were forced to stand in a long line as representatives from the national party office were on site to “verify” whether these community members were eligible to vote.

Gebresellassi signed up approximately 400 members and submitted forms to the party one month before the vote, but only a handful of her supporters ended up on the final voting list. Her campaign team was forced to sift through hundreds of membership forms, as supporters stood around anxiously waiting to match their name with a form.

It was a stressful, painful and humiliating experience for these new party members, many of whom came to participate in the Canadian political process for the first time. Some voters were turned away because they were “not on the list.” Young families with children, elderly people, shift workers and other Gebresellassi supporters stood in line for as long as two hours waiting to cast ballots.

In the main hall, meanwhile, the overwhelmingly white and middle-class audience sat impatiently waiting for the nomination meeting to get underway.

With the registration process still taking place, Ontario NDP party executive Janet Solberg, who was in charge of chairing the meeting, announced that the speeches and voting would begin. A small group of Gebresellassi supporters protested.

Soon after, Solberg suggested that everyone in line be given ballots as long as they could produce identification that showed they lived in the riding. But by that point, many voters had been turned away or left in frustration.

Those at the nomination meeting who signed up for their membership online and paid with a credit card were processed with no difficulty and were added to the voting list.

The process discriminated against the Gebresellassi campaign, since many in her voting base of mostly racialized, working-class people have limited access to the internet and do not have credit cards.

We do not have exact data on the numbers of voters who were turned away or whether it would have ultimately changed the result.

But it’s painfully clear that the local riding association was not prepared for the influx, and as a result people were denied the vote or faced serious obstacles to participating in the democratic process.

The Parkdale-High Park nomination race demonstrated that there are still serious structural and institutional barriers to participation in the NDP, despite the party’s professed strong commitment to equity.

Matt Fodor is a PhD candidate in political science at York University. He served as manager of Saron Gebresellassi’s nomination campaign.

Updated on Monday, July 8, 4:41 pm: The federal NDP’s director of communications Melanie Richer sent the following statement in response to this story. It has been edited for length.

NDP members in Parkdale-High Park democratically nominated their candidate for the next federal election.

Every effort was made to get people on the voters list, to confirm people were eligible and to find a path to ensure they could vote if they lived in the riding and were eligible to support their candidate.

While the NDP is always looking for ways to improve participation, the party is proud of the nomination of Paul Taylor as the NDP candidate.

It is inaccurate to suggest that the only the memberships of individuals signed up by Saron Gebresellassi’s team were being “verified” by party staff. Anyone whose name did not appear on one of the lists provided by the party had their membership verified. All unconfirmed memberships were subject to confirmation at the nomination meeting.

Anyone whose membership could be confirmed based on their physical membership form was escorted to registration by party staff.

Overall, very few of the hundreds of members who showed up to vote were turned away.

Early on, a few people were turned away because they expressly stated that they had not purchased their own memberships. This is in line with party policy.

The process did not discriminate against any campaign.

To say that the audience was “overwhelmingly white and middle-class,” is categorically false. The room reflected the diversity of the riding.

The author’s own lack of detail regarding how many people were actually turned away makes it irresponsible to speculate about the final result.

While the NDP is always looking for ways to improve access to participation, particularly among equity-seeking groups, the party is proud of its process and believes everyone who was in attendance and eligible to vote in the nomination for the candidate in Parkdale-High Park, was given the opportunity.