'Tis the season of contemplation, or is that contempt? 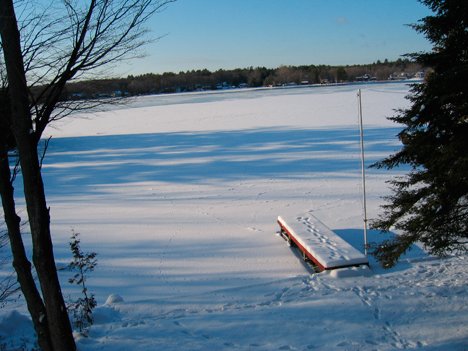 Coyotes yelping across a frozen, forlorn lake the crack of someone chopping wood in the distance the whip of the wings of chickadees flying within arm’s reach, very close overhead.

Post-Christmas esconced in the woods in Somewhere, Ontario, far from the Boxing Day huffing and puffing of the Big Smoke, it’s easy to lose your self in the forested surroundings. Thoughts scatter, fall slowly like snowflakes from the sky. I must be high.

What is it about getting back to the wild that sets our souls free, makes the so-called conveniences of a modern world seem like unnecessary encumbrances? Sounds cliché, I know, and a bit contradictory seeing as I’m stringing these words together on the most modern of gadgets, a laptop computer, with a feed from god knows where, my very own hot spot.

But it’s curious, the more we become connected to the modern world, a Tweet here, a text there, the faster we seem to lose our link to our place in the universe. The Star, that most populist of newspapers, weighed in this morning with number four on its 10 most important works of the decade and it’s American Idol. All in praise of reality TV now.

Forgive me for being a fly in the egg nog, but a segue to Morrison if I may: “I was doing time in the universal mind… I was turning keys… I was settin’ people free…”

Tis the season of contemplation, or is that contempt? But here I read that stores were filled to bursting with shoppers this holiday season and the recession’s over. Tell it to the credit card creditors. And hook me up with that new whatever. Cuz everyday is Christmas and Santa Claus is coming to town. Me, I just want to crawl back into my cave, stoke that fire burning somewhere inside.[rssbreak]