NOW MagazineNewsObama: In search of a decent interval?

Obama: In search of a decent interval?

It can't have taken three months to write the speech that President Barack Obama gave at West Point on Tuesday,. 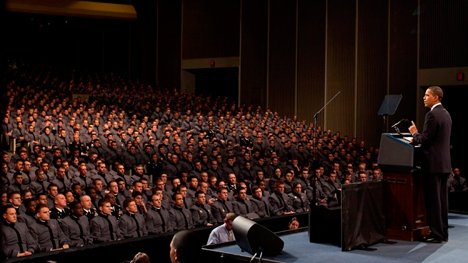 It can’t have taken three months to write the speech that President Barack Obama gave at West Point on Tuesday, but clearly much thought went into his decision to send 30,000 more American troops to Afghanistan.

Some aspects of his strategy even suggest that he understands how little is really at stake there for the United States.

This is despite the fact that his speech is full of assertions that al-Qaeda needs Afghanistan as a base. That is a fundamental misunderstanding of the nature of terrorist operations, but it permeates American thinking on the subject. Even if Obama knows better himself, he cannot hope to disabuse his fellow-Americans of that delusion in the time available.

Instead, he goes along with it, even saying that Afghanistan and Pakistan are “the epicenter of the violent extremism practiced by al-Qaeda….Since 9/11, al-Qaeda’s safe-havens have been the source of attacks against London and Amman and Bali.” This is utter nonsense, but even if he knows it is nonsense he cannot say so publicly.

Al-Qaeda doesn’t run training camps any more it leaves that to the various local groups that spring up and try to follow its example both in the Muslim world and in the West. The template for Islamist terrorism is now available everywhere, so al-Qaida no longer needs a specific territorial base. For the purpose of planning actual terrorist attacks, it never did.

Terrorist operations don’t require “bases” they need a couple of hotel rooms or a safe house somewhere. The operational planning for the 9/11 attacks was done in Germany and the United States. The London attacks were planned in Yorkshire, the Amman attack probably in Syria, and the Bali attacks in Jakarta.

If the Taliban conquered all of Afghanistan and then invited al-Qaeda to set up camps there – neither of which is a necessary consequence of an American withdrawal – what additional advantages would al-Qaeda enjoy? Well, it could then fly its people in and out through Kabul in addition to using Karachi and Lahore, but they’d face even stiffer security checks at the far end of the flight. It hardly seems worth it.

The leaders of al-Qaeda would certainly like to see the Taliban regain power in Kabul, since it was al-Qaeda’s attacks on the United States on 9/11, specifically intended to provoke a US invasion of Afghanistan, that brought the Taliban regime down in the first place. But al-Qaeda takes no part in the Taliban’s war in Afghanistan: it is strictly an Afghan operation.

Even if Obama does not believe the Washington orthodoxy, which insists that who controls Afghanistan is a question of great importance to American security, his short-term strategy must respect that orthodoxy. Hence the “surge”. But the speed with which that surge is to be followed by an American withdrawal suggests that he may really know better.

July, 2011 is not a long time away: all the Taliban leaders have to do is wait eighteen months and then collect their winnings. If they are intelligent and pragmatic men – which they are – they may even let the foreign forces make some apparent progress in the meantime, so that the security situation looks promising when the time comes to start pulling the US troops out.

In fact, the Taliban might not even try to collect their winnings right away after the foreigners leave. There’s no point in risking a backlash in the United States that might bring the American troops back.

This is actually how the Vietnam war ended. The United States went through a major exercise in “Vietnamisation” in the early 1970s, and the last American combat troops left South Vietnam in 1973. At that point, the security situation in the south seemed fairly good – and the North Vietnamese politely waited until 1975 to collect their winnings.

In doing so, they granted Henry Kissinger, national security adviser to President Richard Nixon, the “decent interval” he had requested. A “decent interval,” that is, between the departure of the American troops and the victory of the forces that they had been fighting, so that it did not look too much like an American defeat. In practical political terms, that is also the best outcome that Barack Obama can now hope for in Afghanistan.

If that is Obama’s real strategy, then he can take consolation in the fact that nothing bad happened to American interests after the North Vietnamese victory in 1975. Nothing bad is likely to happen to American interests in the event of a Taliban victory, either. Nor is a Taliban victory even a foregone conclusion after an American withdrawal, since they would still have to overcome all the other ethnic forces in the country.

The biggest risk Obama runs with this strategy is that it gives al-Qaida a motive to launch new attacks against the United States. The Taliban want the US troops out of Afghanistan, but al-Qaida wants them to be stuck there indefinitely, taking casualties and killing Muslims. It’s unlikely that al-Qaida can just order a terrorist attack in the United States, but if it looks like the US troops are really going home, then it may well try.

On the other hand, maybe all this analysis is too clever by half. Maybe Obama just thinks he can win the war in Afghanistan in the next eighteen months. In that case, his presidency is doomed.