NOW MagazineNewsOp-ed: No more time to waste on the climate crisis

Our governments are struggling to catch up as a new wave of the virus spreads – is this how we want to deal with the growing climate emergency? 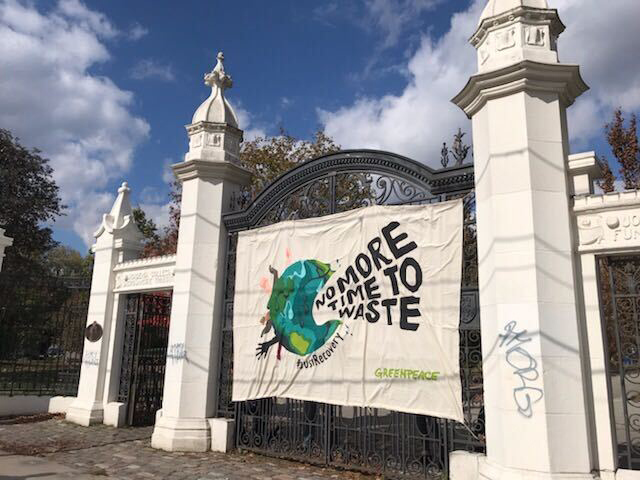 On Saturday, October 17, I joined a small group of Greenpeace volunteers at Trinity Bellwoods Park. While Trinity Bellwoods is a beloved spot to picnic for many Torontonians, we were there for another reason: to reclaim public space and send a message to politicians to follow through on their promise of a green and just economic recovery from COVID-19.

With smiling eyes above their masks, local volunteers who I have known for years (but had not seen in person for months because of the pandemic) dropped our banner over the park’s well-known metal gates. Across the white fabric, a sick planet earth shouted, “No More Time to Waste”.

I couldn’t help but think about the people of my city, who’ve been through unimaginable struggles over the last eight months. I have seen first-hand how the pandemic has exacerbated existing systemic inequalities in our society. At the onset of the pandemic, food prices for everyday necessities at my neighbourhood grocery store soared and food banks saw a 50 per cent rise in demand. People without jobs and homes set up tents in hidden corners of the city and along the beaches of Lake Ontario. They deserve better.

Like pandemics, climate crises can strike quickly, hitting the most vulnerable among us the hardest. Our governments have scrambled to rescue us from the pandemic, struggling to catch up as a new wave of the virus spreads. Is this how we want to deal with the growing climate emergency, too?

The cost of preparation will always be much less than the cost of a rescue operation. But that preparation will take many years. That’s why many environmental groups have called on the federal government to develop serious policies immediately.

To Trevor, one of the volunteers involved in Saturday’s banner drop, the best way for the Canadian government to show they actually believe in a just recovery is through the implementation of the United Nations Declaration on the Rights of Indigenous Peoples.

For Nikki, what’s important is the kind of jobs that will be created in a green economy. As she puts it, “We already know we need to fight the climate crisis. Tackling the unemployment brought on by COVID-19 with green jobs illustrates that everything is linked together”.

The government is investing unprecedented amounts of money in different sectors of the economy in response to the challenges of COVID-19. Finance minister Chystia Freeland and economic development minister Mélanie Joly are devising the investments that will be announced in a fall budget update, but that has yet to materialize.

On September 23, the federal government opened a new session of Parliament with a Throne Speech and outlined its agenda for building “a more resilient future for Canada.” But despite Prime Minister Justin Trudeau’s promise of an ambitious green agenda, many of the proposed policies on the climate front were a repeat of old slogans.

The responsibility for ensuring a green and just recovery should not be limited to the federal level. Municipal governments need to contribute, too, with plans for social housing for those who lose their homes in times of emergency, enough locally grown food for everyone and green jobs that help families thrive and protect nature.

Public mobilization is more vital than ever. It is important that we maintain pressure on our politicians and hold them accountable for the promises they have made.

Mobilizing during the pandemic has definitely changed. Social distancing has made attending community meetings and large climate strikes in our city a thing of the past. Activism has mostly transferred to the virtual environment. For the past 8 months, volunteers have been meeting online, participating in Twitter storms and bird-dogging online townhalls. When we finally got together to create the banner and reveal it to the public, we had to be careful about following public health guidelines.

But whether it’s by gathering in small groups with masks and distancing measures, or by populating social media, we should all continue to ask our government to make bolder, greener and fairer commitments – and stick to them.

Helia Sehatpour is a member of Greenpeace Toronto and a graduate student of environmental psychology.