This mayoral race is beginning to look like an Italian job. 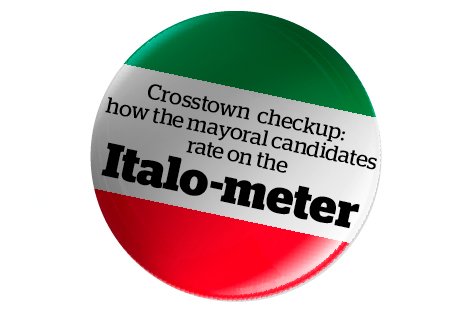 Four of the five main contenders boast Italo roots. So who among them is the real paisan?[rssbreak]

Personal narrative Son of peasant farmers who arrives in Canada at age 13 speaking barely two words of English goes on to become a local hero.

Going for him That cute favourite uncle thing he lives in the same house in Little Italy his parents bought way back when.

Going against him Shares questionable nickname, Joey Pants, with guy who plays psycho Sopranos character he’s the city’s tree advocate, and we all know Italians love their gardens – trees, not so much.

Quotable “A man who knows one country knows no country.”

Going for him Working-class kid from wrong side of the tracks storyline Liberal connections – the party of Pierre Elliott Trudeau still holds a special place in the immigrant heart.

Going against him WASP-wannabe sensibility complete with midtown digs political baggage – he’s the consummate insider, a backroom boy for both the Libs and Tories.

Quotable “A lifetime of progressively better tomorrows… that’s what I want for every inhabitant of Toronto.”

Personal narrative Canadian-born-and-bred offspring of Italian-Americans from upstate New York who came to Canada at the height of the Vietnam War.

Going for him Mamma’s-boy good looks fluency in French and Arabic cred with the pick and shovel brigades that built the city – Giambrone knows something about digging, he’s a former archaeologist.

Quotable “Stop messing in my ward or there will be problems.”

Personal narrative A former landscaper with union roots lucks out on a wave of anti-?Grit sentiment to win a seat in the provincial legislature for the NDP at the tender age of 28. Comes back after fall from grace, resurfacing on council.

Going for him Dapper Dan good looks to appeal to the Jersey Shore crowd (too bad they’re in Jersey) love of furry animals – Mammoliti served as Toronto Zoo chair.

Going against him Identity crisis – called himself George for the longest time before changing to given Italian name Giorgio anti-?gay proclivities.

Quotable “If you pay peanuts, you get monkeys.”