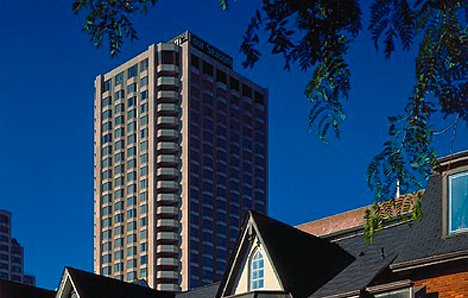 Heritage types are taking on new battles these days, fighting for the preservation of vistas as well as buildings.

See plans for 43 and 48 storey condos at Avenue and Bloor on the patch currently occupied by the Four Seasons Hotel.

Preservationists say the proposal will mess with the view of the historic Legislature when viewed from the south end of Queen’s Park Crescent.

Hmm. Don’t know about that one.

The Four Seasons, which rises some 43 storeys into the sky, can already be seen poking up from behind the trees of Queen’s Park, along with other buildings in the area, depending on where you happen to be standing on Queen’s Park Crescent.

Arguably, the Manulife Centre a block over is more of a scene killer, sticking out like a sore thumb to the east.

So, what’s the big deal?

Could the Four Seasons plans be the domino that sets condo development south down historic Queen’s Park Crescent? Maybe.

Those plans for a tower on the grounds of the old McLaughlin Planetarium are not completely dead. They’ve just been shelved, waiting for a more opportune time to be unveiled.

The University of Toronto, which purchased the property from the ROM in January, has been entertaining expansion plans of its own for its Faculty of Law, commissioning a development study in 2007 to make the lands a gateway to the campus.

The time may be nigh on that one. And it’s not likely any plan for the Planetarium will meet with the same public resistance in these tougher economic times.

The condo creep is already in full swing further east on St. Joseph, where council just approved a mammoth condo development, despite scale and heritage concerns.

A little south of that to the campus of St. Joseph’s College School at Wellesley and Queen’s Park Crescent, development pressures are only increasing. The private all girls school is losing out to the competition for enrollment and as recently as a few years ago was reportedly looking for a suitor to help back plans to expand onsite.

That picture perfect postcard preservationists imagine for Queen’s Park is changing around the edges as we speak.[rssbreak]