At a time like this, it is absolutely critical that we be as clear as we possibly can about what. 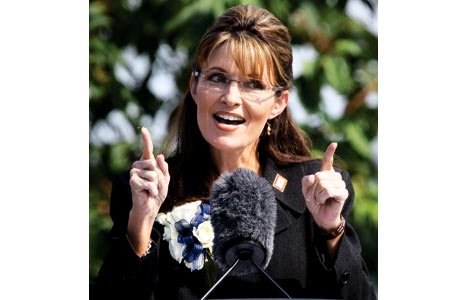 Sarah Palin represents that outdated version of capitalism: the idea that the world has no limits. Photo by CP/Al Grillo

At a time like this, it is absolutely critical that we be as clear as we possibly can about what it is that we want, because we might just get it.

What if the bailout actually works, what if the financial sector is saved and the economy returns to the course it was on before the crisis struck? Is that what we want? And what would that world look like?

The answer is that it would look like Sarah Palin. The Republican vice-presidential candidate stepped onto the world stage and exactly two weeks later, on September 14, Lehman Brothers collapsed, triggering the global financial meltdown.

So in a way, she was the last clear expression of capitalism-as-usual before everything went south. By offering us this glimpse of a future, one narrowly avoided, Palin provides us with an opportunity to ask: do we want to go there? Do we want to save that pre-crisis system?

What was Palin telling us before she was so rudely interrupted by the meltdown? That environmentalists, liberals and do-gooders are all wrong. Keep driving your gas-guzzling car, keep going to Walmart and shop all you want. The reason for that is a magical place called Alaska.

Just come up here and take all you want, she said at the Republican National Convention. And the crowd chanted: “Drill, baby, drill.”

What Palin was saying is built into the very DNA of capitalism: the idea that the world has no limits. There will always be another frontier, another bubble. Just move on and discover it.

U.S. President Barack Obama tells us to look forward. But we have to look backwards.

Modern capitalism was born with the so-called discovery of the Americas. It was the pillage of the continent’s natural resources that generated the excess capital that made the Industrial Revolution possible. Early explorers spoke of this land as a New Jerusalem, a land of bottomless abundance, of constant reinvention.

This was always dangerous to the people who were already living on the “discovered” lands, but now the planet itself is telling us that we cannot afford endless new beginnings.

I almost feel like we’ve been given a last chance, a tiny bit of time and space to change course.

But we are not free from the myth. The willful blindness to consequences is embedded in the way Washington is responding to the financial crisis, preferring to throw trillions of dollars into a black hole rather than find out how deep the hole actually is.

And we see lots of other signs of the old logic returning. Wall Street salaries are almost back to 2007 levels. There’s a certain kind of electricity in the claims that the stock market is rebounding. “Can we stop feeling guilty yet?” you can practically hear the cable commentators asking. “Is the bubble back yet?”

And they may well be right. But without huge popular pressure for structural reform, the crisis will prove to have been nothing more than a very wrenching adjustment.

The result will be even greater inequality than before the millions of people losing their jobs and homes aren’t all going to get them back.

Financial markets are being bailed out to keep the ship of finance capitalism from sinking, but what is being scooped out is not water, it’s people. People are being thrown overboard in the name of “stabilization.” The result will be a vessel that is leaner and meaner.

Should our job be to bail out this ship, the biggest pirate ship that ever was, or to sink it and replace it with a sturdier vessel, one with space for everyone? One that doesn’t require these ritual purges, during which we throw our friends and our neighbours overboard to save the people in first class. One that understands that the earth doesn’t have the capacity for all of us to live better and better.

Make no mistake: capitalism can survive this crisis. But the world can’t survive another capitalist comeback.

From the The Progressive, adapted from a speech to the 100th anniversary conference of the magazine, May 2.