Reasons why privatizing the TTC is the stupidest idea ever 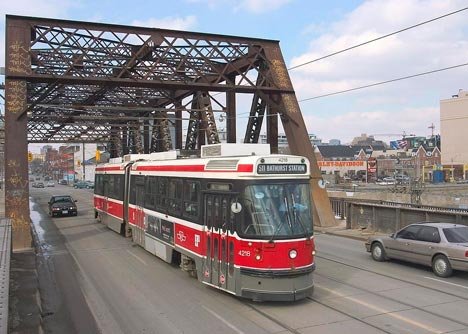 What’s Curious George Smitherman thinking? And that Rocco Rossi guy. Sheesh. Is there anything these guys won’t say to get elected mayor? Their latest bad idea: to privatize all or part of the TTC. Here are six reasons why selling off any part of public transit is the stupidest idea ever.

The TTC’s a huge asset

And the last thing a cash-strapped city should be doing is selling off its most valuable resource. The TTC generates revenue, folks, a cool $834.8 million in 2009. Right now, 75 per cent of money for its operations comes from the fare box. Think of how profitable the TTC could be with a little help from our friends in the provincial and federal governments.

We’re deluding ourselves if we think fares won’t go up if the private sector gets its greasy little mitts on this cash cow.

Corporations are in the business of making money. Period. Governments are responsible to the public. We can vote politicians out of office if we don’t like the job they’re doing. Who you gonna call when corporations start jacking fares? Cue the telephone answering machine: “A customer service rep will be with you in (fill in the blank here) minutes.”

Any sell off will mean pissing away billions in public money already invested in the system.

Can any sell off to the private sector cover money spent building Toronto transit over the decades? To say nothing of the billions invested in buses, streetcars and subways and related infrastructure. No. Nada. Zilch. That’s the bottom line.

We’re setting ourselves up for another Sheppard East subway debacle.

Remember that line to nowhere that some guy named Mel built because it would mean condo opportunities for his buds in the development biz? That white elephant of white elephants was supposed to be paid for by developers. Not a dime of taxpayers money was promised. More than $1 billion bucks later…

Guess who’s going to have to bail out the private sector when they go belly up – or ridership plummets because the service is so shitty, the stations too dirty from lack of clean up to save money?

You guessed it. The same taxpayers both Smitherman and Rossi say they’re trying to protect.

You think it’s bad now. Wait till the person taking your ticket or driving the local bus is some poor overworked, underappreciated, non-union schmuck making $12 an hour. You get what you pay for.[rssbreak]