This year's snowmaggedon is pretty pathetic, but still caused lots of problems 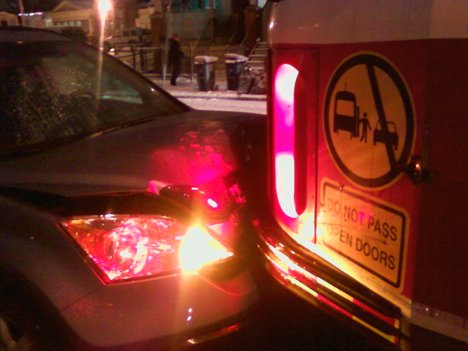 It snowed. We’ll make it through this together.

Right. So once again someone missed one of those giant red trains driving down the middle of the street.

Monday night’s storm was expected to account for almost a third of the winter’s total snow fall until now and apparently kept Environment Canada’s meteorologists and climatologists on the phone with reporters from all over Southern Ontario for a heavy chunk of the afternoon and evening, several of whom blamed it on El Nino.

Although there were no actual storm warnings issued for the GTA the build-up left traffic all over Toronto scrambling to stay in between the lines.

On the only night all year the TTC could be justified in having delays, College streetcars were held up at Ontario St. for half an hour last night when an SUV drove into the back of one around 8 p.m.

The worst of it though, came this morning when a tractor trailor rolled on the 401 at Yonge and, according to police, everyone behind him stopped to take pictures with their phones.

But the city’s skidding SUVs weren’t the TTC’s only obstacles last night as reports of routes in the York Mills/Don Valley area having been diverted due to conditions continued to come in even after the snow let up.