In town to talk turkey, Harper’s vacation kicks off with a few Toronto stops, AGO not among them 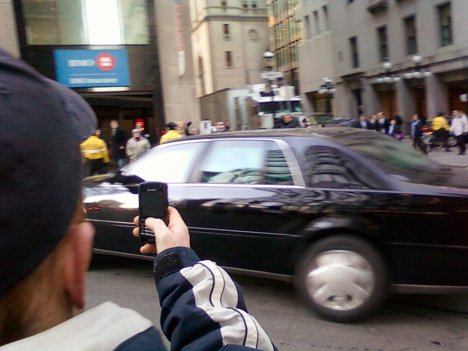 Behind the darkness lurks the prorogue prime minister

Behind the darkness lurks the prorogue prime minister

Midday traffic in the Financial District stood still for about thirty minutes around 3:30 Wednesday when Prime Procrastinator Stephen Harper made his break for the DVP via Yonge.

The motorcade kept all traffic leading onto Yonge between King and Queen Quay at literal stand still until the procession passed.

Fresh off a cabinet reshuffle, Harper’s visit wasn’t highly publicised. What was he up to in that part of the city? Mattress shopping at The Brick?

Actually he was in town for an off-the-record round table session with several members of Canada’s economic elite after a meeting with the Greater Toronto Area and Central Ontario Regional Caucus.

Two meetings took place within a five block radius of one another. The second of which was at economic think tank C.D Howe, where he was slated to discuss progress on the budget – the same budget he canceled Parliament for.

The meeting wasn’t open to the public or reporters so there’s no verifiable way to find out exactly what went down. But considering that last month it was C.D Howe that said we’re about $60-billion further behind than we thought, chances are the phrase “what the fuck guys?” came up at least once.

The meeting was convened by the Prime Minister’s office as part of a series of ongoing consultations, according to C.D. Howe.

Present and accounted for were T.D CEO Edmund Clark, Nancy Hughes Anthony, CEO of the Canadian Bankers Association and G.E Canada CEO Elyse Allan, who also serves as the CEO of the Toronto Board of Trade. So, there’s that.

But Harper’s visit wasn’t all mid-day brunch and hanging with millionaires. Protesters who somehow found his whereabouts considerably faster than local media lined the streets outside C.D Howe in numbers approaching fifty to protest the prorogue of Parliament.

Doubtful their message was heard though, through the filter of law enforcement consisting of RCMP, OPP and Toronto Police that kept citizens at bay from either end of the block. See below, represented by a small grey spec, Stephan Harper, getting into his caddie. [rssbreak]