What’s got upholders of the status quo so freaked about a mayoral run by Adam Giambrone? Hint: it’s not a gay thing. 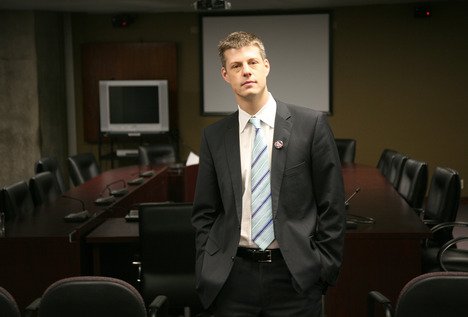 Queer thing that news Councillor Adam Giambrone is not gay made it clear across the country.

No use crying over spilt milk (can I say “homo”?), but please allow me to shed a tear for Councillor Adam Giambrone.

I need to make my peace, seeing as I’m the author of his recent misfortune in the press, the “gay” slip that ruined his plans for a nice, quiet New Year’s Eve. I’ve been doing my penance, listening to Morrissey and the Smiths (Bigmouth Strikes Again) non-stop ever since.

For the record, Giambrone’s not gay. He has a female partner. Her name is Sarah and she works for the provincial government. Full stop. End of story.

On a slow news day it should have been a footnote. But it wasn’t. Yes, news that Giambrone’s not gay made it clear across the country, thanks to CTV, Canwest and Sun Media.

Why did certain elements of the (predominantly conservative) media decide to turn it into fodder for the day, helping to put Giambrone, who’s never felt the need to define himself, in the awkward position of having to?

I have to ask: gay, bi, straight – why should we care?

But when the person in question happens to be setting up a run for mayor that is freaking out the powers that be just a little, all the spilled ink in the mainstream makes more sense. What better way to undermine his chances?

Let’s face it. We may be a decade into the 21st century, but the G-word still carries a fair bit of negative baggage – maybe not in the city core, but certainly anywhere east of Vic Park and north of the 401.

And for the conservative-leaning forces controlling the opinion-shaping mass media (I include the Toronto Star in that group), Giambrone represents a continuation of the hated David Miller legacy.

What is it about a possible Giambrone run that so unnerves upholders of the status quo?

For starters, his musings about paying workers more in return for no-strike assurances is rattling an establishment pushing bottom-line-feeders like George Smitherman and Rocco Rossi, who are considering privatization and selling off valuable assets like Toronto Hydro to their buds in big biz.

Put Jack Layton and Olivia Chow and the organizational might of the NDP machine in Giambrone’s corner (how about a timely endorsement from Miller himself for good measure?) and all of a sudden baby-face wunderkind goes from pretender to contender.

There I go spinning out-there theories again, but his rumoured hookup with Miller kingmaker John Laschinger (Laschinger says he hasn’t made any decisions yet) is still a real possibility. Now, wouldn’t that be a kick in the ass to the powers that be?

There’s much at stake in the coming municipal election – no less than the future of our fair city. Pardon me if I’m sounding like a drama queen.

But the political pendulum has swung. The green, transit-friendly course charted by progressives under Miller is in danger of being rolled back big time.

Do we really want a return to the days of smoke-and-mirrors zero property tax increases that translate into gutted community services and wholesale alienation of visible minorities and poor communities?

Maybe you should check the crime rate before you answer that question. It hasn’t been going down by leaps and bounds because of the tired law-and-order agenda of cost-cutting right-wingers on council.

No, we owe this relative peace in our time to the left’s efforts to push community policing, among other programs, in priority neighbourhoods.

The kind of Toronto the left wants could still become a reality. But the progressives are divided. Joe Pantalone’s running, and so may Shelley Carroll. Unless they get their act together, say goodbye to all that waterfront visioning and Transit City.

Hopefully, the recent “gay” stir over Giambrone won’t scare him away from a possible mayoral quest. He may be the left’s best chance. How queer is that?