Don't even think about bringing out a camera on the TTC 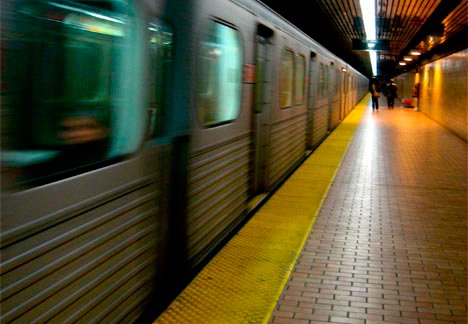 It’s been weeks since pictures of the infamous TTC sleeper circulated and a vicious riders-versus-collectors battle erupted. And what have we learned?

Well, not much in my experience.

I thought by now, with media attention diverted to the Olympics, the scathing atmosphere on the TTC would’ve settled a bit. Riders would put down their cell phone cameras, and TTC employees might consider canning that silly Facebook protest.

Over the weekend, I was about to pass through a turnstile at a downtown station when I stopped to fish a book out of my bag (it was, FYI, Zadie Smith’s collected essays, Changing My Mind. Really well-written and perfect for subway reading).

In order to lift the hardcover out of my bag, I first took out my camera. I had it in my hands for no more than 3 seconds when the collector and a rider both asked me, one directly after the other and both pretty forcefully, not to take their picture.

Do I look like Jack Lakey over here? I’m not interested in taking anyone’s picture, I began to explain.

But before I could say anything of the sort, I was cut off by another passenger’s objections to having her picture taken.

At this point the scenario just felt ridiculous. I was set to launch into a “calm your hormones!” rebuttal when the collector began reciting the TTC’s in-station photography policy to me (or more like at me). I put my camera back in my bag and walked on.

These people are the definition of hopeless, I thought.

Obviously this is only one anecdote, and is in no way an indictment against our public transit system or the people who use it. But it did make me shake my head pretty vigorously. I can’t wait till we’re over this bout of immaturity.[rssbreak]