Dudes with dogs and sloppy kisses: when sex isn’t an option 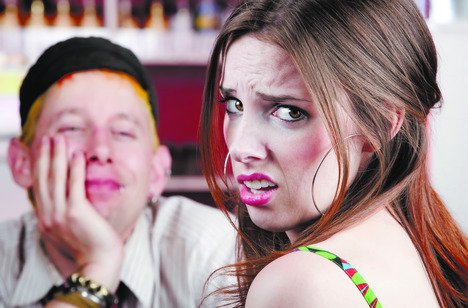 “You have to follow the law of large numbers,” my brother told me.

“If you really want to meet someone, you have to meet a ton of guys.”[rssbreak]

So I sat down and joined eHarmony. Why eHarmony? It’s ads are good, although “Just a fuck” isn’t an option when you’re asked what kind of relationship you’re looking for.

The questionnaire was extensive. Ticking the boxes for which races I was willing to date made me slightly uncomfortable, but it wasn’t long before I was corresponding with single Toronto men – three of whom I ended up actually meeting.

Avi called me at 10 am on a Sunday. We’d been writing back and forth, so I gave him my number. At around 1 pm he swung by to pick me up. He drove a white gas-guzzler and brought his dog along for the ride.

“She’s cute, isn’t she, Archie?” he asked the dog. “Should we hang out with her for a bit? Yeah, I think we should.” Yes, Avi opened by speaking to me through his dog.

“What’d you do last night?” was the first question he aimed at me directly as we drove away.

“Well, I drank some wine with a few friends, and it was so funny because my friend Natasha….”

“You ever been to Muzik?” he interrupted. “I was there last night, and it was unreal. I had a few guys over to my house first to pre-drink. We watched the hockey game. Guys are weird, man, you get them in a room and they only want to talk about two things: hockey and pussy.”

“I’m sorry, Avi, did you just use the word ‘pussy’ to denote the female genitalia less than 45 seconds into our date?” I asked.

“Yeah. What? Are you, like, pissed? Should I, like, take you home now?” I should have said yes, but the consummate observer in me wanted to stick it out, maybe just for the story. You’re welcome.

We pulled up in front of Williams-Sonoma, where, Avi informed me, we would purchase a birthday gift for his grandmother. When I asked if we would be leaving Archie safely in the car, Avi looked at me as if I’d suggested putting his testicles in a vice.

In the shop, the apron-clad sales guy quickly informed us that because food is for sale there, animals are not permitted.

“Fine, here you go,” Avi said, handing Archie’s leash to the poor associate. “You hold him then.”

The guy glanced at me with a look that said, “What’s a nice girl like you doing with a fu… ?” which I interrupted with a “duly noted” nod.

Avi dropped me off less than an hour and a half after he’d picked me up. Neither of us mentioned anything about the possibility of another date. I reached up to the passenger seat in front of me to give Archie a goodbye ear-scratch.

Whether or not David actually caught the fish he was holding in his profile picture was not relevant. I decided he was the kind of man who could feed me if we were lost in a wetland. I figured that deserved at least a meeting.

Against my better judgment, I met him at his house. His adorable dog seemed to like me and wasn’t being used as a conduit, so things were going pretty well so far.

We went to a pub near David’s house and instantly hit it off. We talked about music mostly and each took a turn selecting five songs on the jukebox. Two beers became four, and first-date trepidation quickly became drunken flirtation.

Just as I was seguing from Rufus Wainwright to Ron Sexmith, David launched across the table and kissed me. It was very sudden and rather wet, but not entirely unwelcome.

Back at his pad, my observer ?brain switched into high ?gear and noted his interesting moves. His technique was different. He applied big sloppy kisses while administering a series of what I can only describe as crotch ?punches to my groin area. This would not do.

I removed my reproductive organs from the line of fire, thanked him for the beers and made up an excuse about an early morning. He said he’d call. I said he should. We both lied.

I liked Rob instantly. He was cute, funny and interesting. We met in an Annex pub and started talking about comedy. Two drinks in, we’d moved to talking life and love. I was enjoying myself very much.

Later, at his place, Rob picked up his guitar to play something. I instantly recognized the first few chords of Radiohead’s High And Dry. A bit clichéd, but I appreciated the effort. Rob began to sing, if sing is the right term for it. His throat and mouth began to make sounds. He got the words right – that part he nailed.

I have good pitch, and hummed loud enough for him to very clearly hear what the notes were supposed to be. He took my cue and made his guttural grunts even louder. All I could think about was how much he sounded like the character “Sloth” in the movie The Goonies. He glanced at me mid-song with a look that said, “Hey, look at us, we’re making music.” No, I was making music. Rob was making a mockery of Radiohead.

Rob never called after that night. That’s okay. I can find love elsewhere, but Rob will always be tone deaf and therefore entirely unlovable.

Three months and about $100 later, I am not happily shellacked to another, as the eHarmony ads promised I would be. While the law of large numbers may mean I have to buy in bulk to find my gem, I am currently out of the online dating pool.3