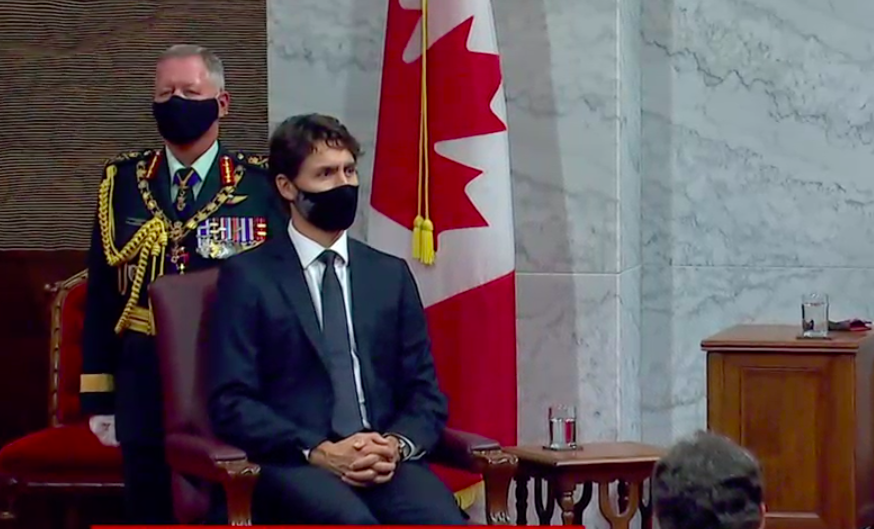 The politics that usually surround a Speech from the Throne can be painful to watch under normal circumstances. During a pandemic… well, there are no words.

The Trudeau government’s highly anticipated Throne Speech was late getting underway on Wednesday afternoon (September 23). The delay was a perfect metaphor for these blurry pandemic times.

The 54-minute address laying out the government’s agenda for the coming fall session was delivered by Governor-General Julie Payette. The setting was a mostly empty Senate chamber, that most sombre of Canadian institutions. Canadians watching on TV were introduced to the Usher of the Black Rod, who, as his title would suggest, ushered in the ceremonies.

It was an odd scene, made more surreal by the fact that neither Conservative Party leader Erin O’Toole nor Bloc leader Yves-François Blanchet were there. Both have contracted COVID-19 and are in quarantine.

If that wasn’t enough of a reality check, we were reminded right off the top by Payette that the “single, common, insidious enemy” that has brought us here is on the rise again in Canada. Yes, we’re at a crossroads – again.

We were also reminded that it’s a global pandemic we’re facing – and all the economic uncertainty that comes with that. And that the consequences so far for Canada have been deadly. More than 9,000 Canadians have died from the virus. That’s easy to forget in the current maelstrom for those whose families have not been directly affected.

The speech delivered on the government’s pledge when Parliament was prorogued six weeks ago to forge an ambitious post-pandemic agenda – and then some.

The government is promising money to create one million jobs, an extension of the wage subsidy program for businesses until next summer and a revamped employment insurance regime to replace the CERB. There are also promises to build national child care and pharmacare programs and money for long-term care, people with disabilities and affordable housing.

Zero-emissions vehicles, a clean power fund, money to plant trees, a mental health strategy for Indigenous communities, the creation of an anti-racism secretariat and appointment of a minister of diversity, and better training for police are also part of the government’s agenda.

The only question is, will it ever be implemented? The minority Liberals will need the support of one of the three opposition parties to avoid an election. And that’s where things went sideways on Wednesday.

The Conservatives say they won’t be supporting the Throne Speech. The main reason stated by deputy leader Candice Bergen was that there was not enough in the speech on “national unity,” which is to say not enough for their base out west; not enough austerity either. But it was all smoke and mirrors. No one expected the Cons to support the Throne Speech. And those polls showing them neck and neck with the Libs have them seeing stars of a possible return to power.

The Bloc is demanding health care dollars for Quebec with no strings attached in return for their support. But that’s just naked posturing. The Bloc have been threatening to table a motion of non-confidence in the government – supposedly over its handling of the pandemic – since August. Blanchet also sees which way the wind is blowing among Quebeckers, and it seems to be toward an election.

So it all comes down to the NDP and leader Jagmeet Singh, or so it would seem. But he too got into game playing despite the fact the Throne Speech makes good on a number of policies pushed by the NDP during the last election.

Singh initially expressed what came off as disappointment in the Throne Speech, writing in a tweet that it was “full of promises we’ve heard before.”

He set out the terms for the NDP’s support during a press conference later. Singh said he wanted to see the government make a commitment to maintaining CERB payments (although not in those words exactly) and paid sick leave for workers.

The NDP and Liberals have been in discussions on both issues. The Liberals have publicly committed to paid sick leave. The government’s proposed EI reforms are supposed to replace CERB. The sticking point for Singh seems to be that the new regime will deliver $100 less to recipients than they’re currently receiving under CERB.

Singh admitted when pushed that it’s not an election he wants. “My goal is not to threaten an election. I don’t want an election. That’s not what people need right now.” Yet, he maintained that the NDP is prepared to fight one.

But the more the questioning from reporters went on, the more it became clear that Singh was intent on milking the moment in front of the cameras for all it’s worth. It’s like 2005 all over again for the NDP.

And there’s the rub. There’s no public appetite for an election. Canadians have bigger fish to fry. And the party that pushes the issue may be the one with the most to lose. A snap election would favour the incumbent government. We saw it recently in New Brunswick. We may see it in BC, where John Horgan has called an election.

But the opposition leaders were not alone in turning up the temperature on a possible rush to the polls. The Prime Minister did his part to raise the stakes in a televised address to the nation after the Throne Speech.

It was scheduled to raise concerns about a recent surge in COVID numbers. Trudeau said this will be no normal Thanksgiving. We may be in for a COVID surge that’s worse than the first wave. And how we conduct ourselves in the coming weeks will determine whether we’re able to be with family for Christmas.

The PM’s office gave networks assurances that his address would not be used for political purposes. But it sure sounded like a prelude to an election. Most of his address was about the Throne Speech.

It concluded on the need to find common ground in Canada. And it reminded parliamentarians that “Canadians have placed a trust in you to guide this country forward. They have placed their faith in you to work together to meet whatever challenges we face.”