Why are we so obsessed with Tiger Woods' infidelity? 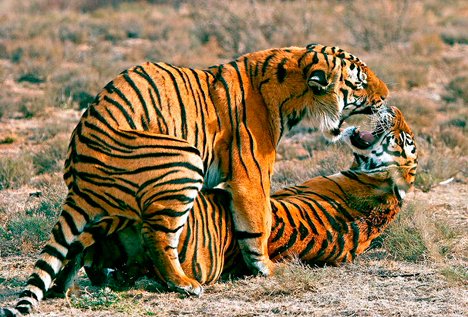 One of these mating Chinese tigers is actually named Tiger Woods. No joke.

One of these mating Chinese tigers is actually named Tiger Woods. No joke.

Not to reduce the media madness over l’affair Tiger Woods to race, but one has to wonder given the salacious details emerging daily in the mainstream press.

The extramarital affairs of overachieving athletes is supposed to be the stuff of tabloids, relegated to the rags that line the grocery checkout line.

Five years ago, maybe, some might argue. But not in the age of infotainment and cheque book journalism. Fair enough.

Some of the negative media onslaught now being faced by the world’s most famous golfer may also have something to do with the fact he’s made a point of cultivating a squeaky-clean image.

And now, it appears, he’s getting his comeuppance for perpetrating a big lie on the public by cheating on his wife (and kids) with assorted cocktail waitresses and party girls. Woods is no angel, despite the carefully crafted public persona courtesy of IMG, the international marketing and media giant. (More on that later).

But the cynic inside tells me the ride Woods has been getting in the mainstream, including the release of recorded phone messages and racy text messages to one of his alleged lovers, is being fuelled at least in part by our fascination with the black man/white woman thing.

And so it is with Woods. The irony is that Woods doesn’t identify himself as black, even though his late father is African-American, making a point of stressing his Asian roots on his mother’s side.

Would the media be so captivated by the revelations of infidelity if Woods had been cavorting with, say, a black women?

When his current wife, former Swedish model Elin Nordegren, first began showing up in the public galleries to cheer Woods at golf tournaments, one couldn’t help but think: trophy wife.

They seemed an odd couple. Of all the women one could imagine Woods with, Nordegren wasn’t it.

No offense to Nordegren, who seems to be a committed partner and mother. She’s not the one at fault here. She just didn’t seem Tiger’s type. Too fair-haired. Too whitebread. Too stereotypical. Too predictable for the seemingly cerebral Woods.

With Nordegren by his side, it was as if Woods was living out some Playboy bunny fantasy not quite fulfilled in college now that he had a little money to burn.

It turns out he was. The three other women who he has so far been linked to romantically all seem to fit the Nordegren mould, plasticized replicas almost, give or take on the hair colour.

It happens to bigger-than-life athletes.

But it wasn’t supposed to happen to Tiger. The discipline and exacting standards that has made him the best by miles on the golf course, we all assumed translated to his personal life off the links. Turns out we were all wrong. Woods is not all that after all.

We should have known. There were warning signs. That GQ interview back in 97 that revealed his taste for sexist and off-colour jokes. The National Enquirer photo that same year of him dancing with a buxom blond under the header, Tiger’s Wild Night With Topless Dancer.

It seems he didn’t even bother trying to keep his latest sexual transgressions discrete. Besides the phone messages, there are a few hundred text messages to one lover floating out there. Stoopid.

“A lot of the things [the press] write are fabrications,” Woods told Sports Illustrated in a 2000 interview, one of only a handful of in-depth interviews he’s given in his career. “Sensationalism sells. You have to know that going in.”

Now he’s saying in an apology released on his website that he didn’t understand the possible ramifications of his actions. “I have been dismayed to realize the full extent of what tabloid scrutiny really means.” Yeah right.[rssbreak]