How Invest Toronto can take us into the future 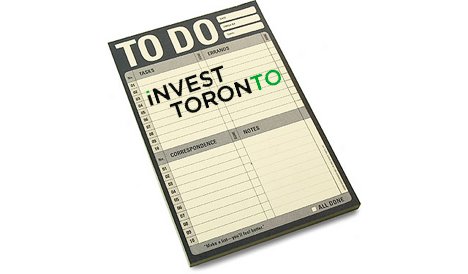 Over the holidays, Renato Discenza, a former telecom and Infrastructure Ontario executive, was named CEO of Invest Toronto, the business-attracting arm of City Hall.

A very warm welcome to him.

But because Invest Toronto got an unfortunate false start (first choice for the job was the trial-awaiting Michael Bryant) and the city is wading through a global recession, the time for well wishes is short. As Barack Obama recently said, it’s time to grab a mop.

So let’s skip directly to the business of remaking Toronto into a high-tech mecca. Here, a to-do list for our new Invest guru.

Spread the good word about our simmering talent in the Internet realm. We have our share of brilliant start-ups, ace developers and enviable accomplishments, but we’ve allowed them to slip under the radar.

Make a fact sheet about all our best Internet innovators, inventions, investments and institutions. Personally visit everyone in Toronto’s tech community and urge them to spread the word when travelling to tech conferences. That’s thousands of unpaid amateur PR reps working to promote the city.

On it, for example: Firefox is the second-most-used Web browser in the world, and it’s developed here. Time to make its creator, Mozilla, more visible. That should be a no-brainer, since Mozilla’s evangelist, Mark Surman, sits on Invest Toronto’s board.

Go straight for the big fish.

Next, pay a visit to Google. Not the Google sales office at Yonge and Dundas, but Googleplex, the company’s headquarters in Mountain View, California. Persuade them to open a development office here, even if it means stealing it from Waterloo, where the search engine behemoth currently has an innovation lab.

Then, when Jonathan Lister, Google Canada’s managing director, goes out to hire Web developers, as he did last month, he can put Torontonians to work in Toronto instead of poaching our people to go elsewhere. (Plus, there are no ceilings when it comes to what our developers could do with the 20 per cent free time Google gives its employees.)

First ingredient for any Internet start-up is money. Assemble a panel of venture capitalist sharks and trot out T.O.’s 10 best Web start-up ideas. Call it Start-up Idol or something hokey. Publicize it well enough and you’ll earn us the reputation of being tech-entrepreneur-friendly.

Hacklab.TO and the Centre for Social Innovation function as terrific workstations for creative (mostly) technical minds. Local government should get into the business. There must be a room at City Hall or Metro Hall that could become a similar community workspace. It could pay for its own equipment by doubling as a venue for some of the city’s many tech events.

There’s a vast informal economy out there of widgets, applications and programs. Harness it.

Invest Toronto has much work to do to bring the world to Toronto. But the world gets smaller and the workload more manageable when the Internet is the marketplace.[rssbreak]