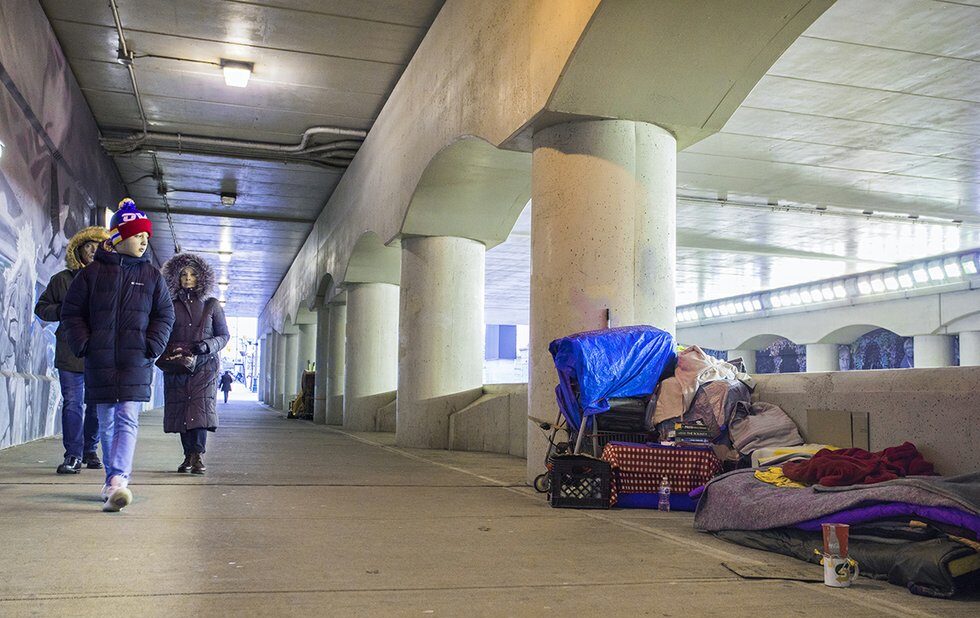 People living on the streets are a common sight in Toronto in the winter months.

The city of Toronto released a winter plan for people experiencing homelessness on October 6. But advocacy groups and homelessness activists say the plan doesn’t go far enough, especially during the city’s first winter of COVID-19.

Toronto’s winter plan will offer 560 new shelter spaces through a combination of shelter beds, hotel programs and supportive housing units, between November and April. This includes 100 spaces at the 24-hour respite site on the CNE grounds, 150 beds in hotel programs and 90 hotel beds to replace the Out of the Cold program.

The Out of the Cold program offered meals and overnight shelter at different locations each night. However, it closed in March due to COVID-19 restrictions.

“They’re planning on using some kind of ‘impermeable barrier’ between the cots or mats,” she says. “But we know that the virus is airborne as well, so that’s not very good public health practice.”

She also points to the city’s promise to provide physical distance between beds or mats.

“They’re still insisting that they’re only going to do a two-metre lateral distance in between cots or mats. We’re arguing that should be two metres around the entire sleeping bed area,” she says.

Crowe also notes that even with the plan’s additional 560 shelter spaces – up from last year’s 485 – frontline workers are estimating that approximately 1,000 people will still be left outside.

This is even more of a concern, she says, when support for encampments from the city is “really weak.”

What about people in encampments?

Advocacy groups and representatives for people living in encampments have hit the city with lawsuit challenging a bylaw that doesn’t allow camping in parks.

“They’re not accepting or even admitting that encampments will continue in a big way,” Crowe explains. “What we want them to do is ensure there are adequate public portable toilets… and help with recycling and garbage pick up and water delivery.”

In response to a request for comment, the shelter, support and housing administration provided a statement about their “comprehensive approach” to providing outreach to those living in encampments. “This includes handing out water to individuals in encampments and providing health and harm reduction supplies,” the statement said. “Street outreach staff will also hand out blankets and sleeping bags during extreme cold weather alerts.”

Susan Bender, manager at the Toronto Drop-In Network, says the city should communicate with people in encampments and take direction from them. “Survival gear and fire-retardant materials will be very important,” she emphasizes.

There have been over 100 encampment-related fires since the beginning of the pandemic, along with one death on May 1.

“So what can we do to stop them from happening?” Bender asks. “Maybe we need meal provisions so that people don’t need to be cooking over propane. But that has to be done by talking with the communities out there, because they know what they need.”

Marianna Reis, a spokesperson for the Encampment Support Network Toronto (ESN), wrote in an email that Toronto’s winter plan should provide basic humanitarian aid to encampment residents throughout the winter.

“This includes water trucks and 24-hour bathroom and shower access, as a bare minimum.”

The city has said in a statement that they have opened “a number of facilities with showers, washrooms and drinking water,” along with portable toilets with hand-washing stations that are “available in key locations.”

The ESN is also asking the city to provide 2,000 additional shelter spots, not 560.

“This includes opening up more shelter spaces across downtown Toronto and the west end, so that encampment residents are not needlessly disconnected from their support systems and their communities,” Reis wrote.

Bender says the province needs to put measures in place that will prevent more housing instability and prevent more people from becoming homeless.

“We need a moratorium on evictions and other tenant protections. Tenants shouldn’t have to negotiate a rent repayment plan with landlords in which, if they default on it, they can be evicted without a hearing,” she says.

Reis said that if the city cannot provide a real housing solution, they can’t punish those who turn to encampments.

“The city must commit to a real moratorium on encampment evictions, especially if they do not have adequate alternative shelter or housing on offer. Otherwise, they are simply criminalizing the unhoused for the city’s inability to meaningfully house them,” she said.

“These units are a component of the City’s HousingTO 2020-2030 Action Plan, which targets approving 40,000 new affordable rental homes including 18,000 new supportive homes,” the news release stated.

“The city can work on their end to create a whole range of options for people who are homeless, but if homelessness continues to happen because of stuff that the province is not doing, then we’re in a really bad place.”