Good for David Miller defending Adam Giambrone's role as TTC chair on Thursday. In the context of this mudfest,. 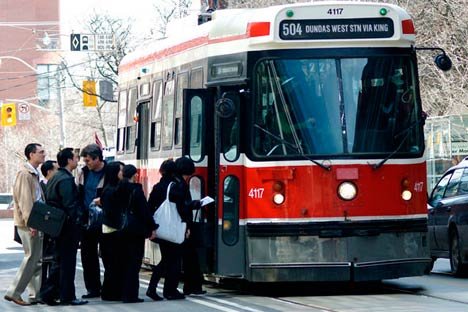 Good for David Miller defending Adam Giambrone’s role as TTC chair on Thursday. In the context of this mudfest, it was actually rather brave.

Sure, everyone’s disappointed that Golden Boy couldn’t handle the pressure without succumbing to his lesser self. Still, though it takes an effort of will to think beyond the tittering, we owe it to ourselves to practice a little self-discipline at this point.

The fact is, part of the gang-up on Giambrone is a gleeful, exulting sigh of relief that someone carrying the Miller legacy has rocketed to his mayoral doom. So, it’s time for everyone to start working really hard about now to separate the issues.

As Susan G. Cole is fond of saying: two things can be true at the same time. Giambrone was truth-challenged AND he stands for Transit City, part of Miller’s equity agenda. The business class in this city, which generally doesn’t care a fig about the less than priveleged folks in the burbs, is heading into overdrive trying to convince us its a frill.

Let’s get real: how much of the public interest was really at stake in the front-paging of Giambrone and the turmoil of his emotional and sexual life? Yes, yes, he got cornered and lied. We hate that. But how did this become a need to know story in the first place? Does his all really come down to the use of a publically-financed couch for nookies? Blessed are the cities with such stand-ins for scandel. (The charge that Giambrone “leaked” news of the fare increase to his lover is completely laughable. All it reveals is that if Ms Lucas considered this news, she doesn’t read the papers much.)

Thinks are a mess at the TTC, to be sure. But as much as the big press loves shots of sleeping collectors and rude drivers – this is all just meta-phenomena, a mere stand-in for the real issues of transit. Call it a case of transferred aggression. What really riles transit users, if my own daily experience counts, are things like standing at a stop freezing for 15 minutes waiting for the College car.

No one taking over the thankless TTC file will escape the burden of public fury, right now – higher levels of governments have predetermined this. Nothing will change until voters start using their franchiise federally and provincially to express municipal woes.

Meanwhile, join the mayor and insist Giambrone, the pol with the mega vision and few actual resources, keeps his post.[rssbreak]