After months of lockdown restrictions, people took to the park to soak up warm spring weather – and left a massive mess behind 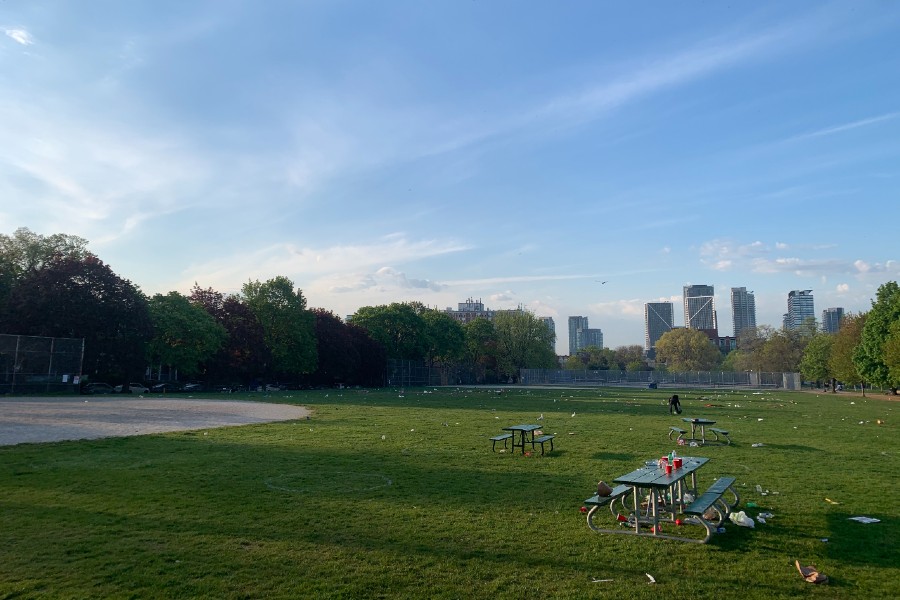 The warmest weekend Toronto has seen all spring inspired thousands of residents to get some much-needed sun on Saturday. By the next morning, photos were circulating on social media of the garbage left behind in Trinity Bellwoods Park.

One person in the area shared a photo of pizza boxes, take-out containers and plastic cups strewn across the social distancing circles painted on the grass in the park.

“This is totally disgraceful. What kind of humans do this? Who comes to a park and proceeds to trash it like this????” Joe Clement wrote on Instagram.

Friends of Trinity Bellwoods Park, a volunteer group that works to maintain and improve the park, re-shared the post alongside their own photos.

“Anyone have any ideas on how to get people to pick up after themselves?” they wrote, tagging Spadina-York city councillor Joe Cressy and Mayor John Tory.

“The City is asking the public to do their part to help keep Toronto clean and safe by properly disposing items in available street and park bins and not leaving items on the ground. If a bin is full, people should look for another bin or ‘pack out’ and bring their waste home for proper disposal,” Burke said.

Cressy was not available for comment, but his chief of staff Brent Gillard told NOW extra resources are being arranged to ensure the park is kept clean in the future.

“We have been told that the unusual amount of litter this weekend was a result of the large anti-mask gathering,” he said.

According to Toronto Police, approximately 5,000 people gathered at Queen’s Park for an anti-lockdown rally and then took to downtown streets between noon and 4 pm. Police allege a Mississauga man bit an officer during the protest and laid assault charges.

Videos and photos circulating on social media showed individuals with beer cans, bottles and other items.

The parade float = a booze can ? pic.twitter.com/TZApoTZZBX

Katherine Money, who is part of Friends of Trinity Bellwoods Park, blames the excessive littering partially on the lack of green spaces in Toronto.

“There’s already significant pressure on our green spaces, and then also consider at the fact that it’s only safe to be outside in groups of five – there’s just not enough space,” she says.

“People are just tired and need to get out,” she adds. “They maybe didn’t understand the consequences when they got drunk.”

She says Friends of Trinity Bellwoods is normally able to be in the park doing clean-up and other maintenance, but those efforts have been put on hold due to the pandemic, and she suspects the city is focused on other priorities given the province is still in the grips of a third wave of COVID-19.

“I don’t think the city has had the ability or opportunity to do that for awhile, because we have other challenges,” she says. “When people see that space is cared for, it becomes easier to respect it.”

Moving forward, she hopes city officials will be more prepared in terms of parks monitoring and maintenance, and also hopes the people who left behind trash change their behaviour.

“We knew that was going to happen and as soon as you see the first person miss that litter can, it opens the flag for the next person,” she says. “That volume of garbage could have been expected on a day like yesterday. There was no park in the downtown core that wasn’t slammed.”

Clement later shared an update later on Sunday, writing that neighbours had gone out to clear up the mess in Trinity Bellwoods.

“The appeal from us going forward is please, let’s do better,” Money says.