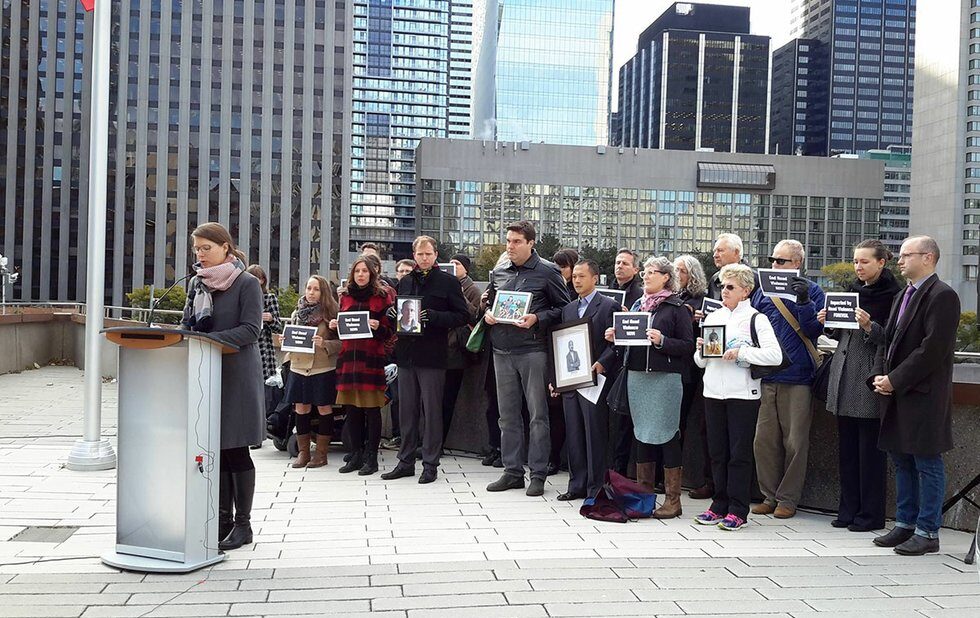 Friends and Families for Safe Streets doesn't believe the city is doing enough to prevent deaths caused by traffic collisions.

Friends and Families for Safe Streets doesn't believe the city is doing enough to prevent deaths caused by traffic collisions.

In the last 30 days, six pedestrians and one cyclist have been killed in traffic collisions in Toronto. Over a 24-hour period in Scarborough in September, four people – a 33-year-old mother with her five-year-old daughter, a 56-year-old man waiting for the bus and a 71-year-old man – were all struck and killed.

On October 24 at Toronto City Hall’s Peace Garden, Friends and Families for Safe Streets (FFSS) held a vigil for the 54 people were killed in local traffic collisions this year. This vigil also marked the one-year anniversary of FFSS, an advocacy group comprised of survivors of traffic collisions and the friends and families of those folks killed or severely injured by careless drivers.

The only group of its kind in Canada, FFSS wants to end road violence in Toronto by advocating for lowering speed limits across the city rather than only in specific areas like school zones and senior centres, adjusting laws around fines and penalties as well as changing the language we use when talking about traffic deaths. For example, rather than saying “accidents,” which absolves anyone of responsibility, FFSS encourages media and policymakers to use “crash” or “collision.”

One of FFSS’s founding members Kasia Briegmann-Samson’s husband, Tom Samson, was killed in 2012 after a car struck him at Davenport and Lansdowne while he was cycling. She says the vigils, which have occurred monthly since June, are a way to raise awareness and show city hall that this is an issue that needs to be better addressed.

“We hold these vigils to let John Tory and every councillor know that there’s a large group of people who care about this issue and will make it an election issue,” says Briegmann-Samson.

While the main goal of FFSS, which is to stop people from getting killed or injured on city streets, is shared by the city’s Vision Zero Road Safety plan, Briegmann-Samson doesn’t believe council’s doing enough.

“I was optimistic when they launched it, but seeing the year roll on, I don’t think the City of Toronto really has a grasp of what ‘Vision Zero’ actually means,” she says, adding that the city is still reacting to collisions as they occur rather than taking preventative measures.

“They’re still debating the Bloor bike lanes and the merits of a protected bike lane, [which] keep drivers, bicyclists and people walking safer. A ‘Vision Zero’ city doesn’t debate that. It’s a no brainer.”

On October 23, the city released a new set of lawn signs to remind drivers to slow down in residential areas with older adults and children as daylight hours decrease. These type of signs focused on the drivers’ behaviour is a shift in thinking that Briegmann-Samson welcomes. A lot of the messaging out there is directed at pedestrians, such as “be lit and be seen,” so when someone is hit, people often blame pedestrians if they were wearing dark colours.

“The city coming out with this campaign [targeting drivers] is a positive shift,” she says.