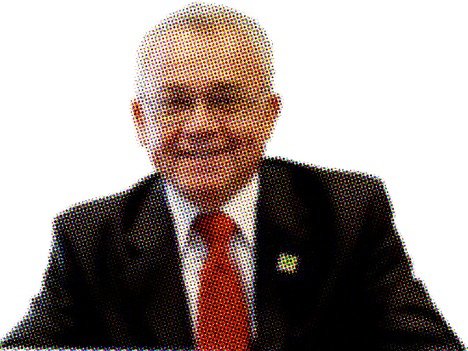 The ticker on the Joe Pantalone For Mayor website steadily marks the seconds, minutes, hours and days until municipal election day in October.[rssbreak]

It’s not only newspaper pundits who are asking, but also a few of Pantalone’s progressive colleagues on council looking for him to pick up and push the lefty narrative before too much political ground is ceded to his main rivals, Mssrs. George Smitherman and Rocco Rossi.

The way Rossi’s been running his mouth, you’d think all Torontonians want to follow the yellow brick road to privatization.

But right now it’s the perception, reinforced by members of the mainstream media who aren’t exactly falling over themselves to seek out alternative points of view every time Smitherman issues a policy statement or Rossi posts a YouTube video of his latest speech.

Some of those considered Pantalone’s natural allies on council are getting antsy, talking openly but privately about concentrating on local races to return as many lefties as possible to council and in that way hold the balance of power.

“No one wants to waste time on a losing mayoral campaign” is one sentiment being expressed.

There are opportunities to increase the number of progressives on council in Trinity-?Spadina (Ward 19), Don Valley West (Ward 26), York West (Ward 7) and maybe York Centre (Ward 10), with reports that Mike Feldman will be retiring, although electing a progressive there is a long shot.

But as a strategy to hold the balance of power, concentrating on local races may not be the answer.

The mayor may have only one vote on council, but he or she is the only member of council elected city-wide. And that confers huge political clout, as does the fact the mayor hands out the plum jobs and committee duties.

Pantalone’s preaching patience. You’ve heard the Aesop tale about the tortoise and the hare….

It’s not like he has been twiddling his thumbs. Unlike his two major opponents, Pantalone’s got a full-time job – arguably two jobs now that he’s running for mayor as well as carrying out his regular council duties.

“Things are where they should be seven and a half months before an election,” he says.

An election planning committee is in place, he’s opened a campaign office, and outreach in the inner burbs and beyond is well under way.

Mostly Pantalone has been playing to small crowds of 30 or so at cultural events here and there.

But an endorsement will be coming soon, he says, from one of the largest construction unions in the city.

Pantalone drops the fact that he’s had conversations with David Crombie and Art Eggleton about their support. He’s looking on the bright side. He thinks progressives will come around… eventually.

It’s understandable, he says, that some of them are still feeling the shock of Adam Giambrone’s untimely withdrawal (and before that, Mayor Miller’s surprise announcement that he isn’t running) and are taking time to assess and regroup.

All will be revealed in time, once the rest of us “sober up” and stop being distracted by his opponents’ smoke signals and drum-beating. For now, Joey Pants says, he’s content to keep his powder dry.

But look for him to fire a few shots March 24, the date set for his official relaunch party at the Montecassino in Downsview.

Circle the date on your calendar. It’ll be a crucial moment in Pantalone’s nascent run for mayor.

Either it will mark the day the earth stood still and everything turned right side up for Pantalone (the chattering classes will be looking to see who shows up) or it will confirm progressives’ worst fears.