NOW MagazineNewsWhy Obama’s got some explaining to do

Why Obama’s got some explaining to do 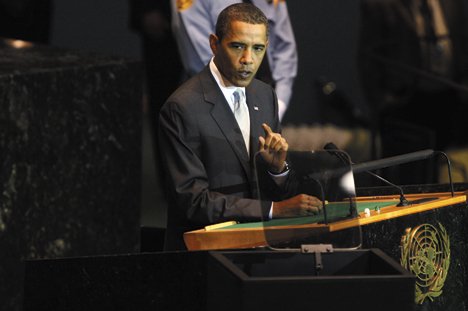 Of all the explanations for Barack Obama’s Nobel Peace Prize, the one that rang truest came from French President Nicolas Sarkozy. “It sets the seal on America’s return to the heart of all the world’s peoples.”[rssbreak]

In other words, this was Europe’s way of saying to America, “We love you again” – sort of like those weird “renewal of vows” ceremonies that couples have after surviving a rough patch.

Now that Europe and the U.S. are officially reunited, it seems worth asking: is this necessarily a good thing? The Nobel committee, which awarded the prize specifically for Obama’s embrace of “multilateral diplomacy,” is evidently convinced that U.S. engagement on the world stage is a triumph for peace and justice. I’m not so sure.

After nine months in office, Obama has a clear record as a global player. Again and again, U.S. negotiators have chosen not to strengthen international laws and protocols, but rather to weaken them.

Let’s start where the stakes are highest: climate change. During the Bush years, European politicians distinguished themselves from the U.S. by expressing their unshakable commitment to the Kyoto Protocol.

So while the U.S. increased its carbon emissions by 20 per cent from 1990 levels, the EU countries reduced theirs by 2 per cent. Not stellar, but clearly a case where the EU’s breakup with the United States carried tangible benefits for the planet.

Flash forward to the climate negotiations that just wrapped up in Bangkok. The talks were supposed to lead to a deal in Copenhagen this December that significantly strengthens the Kyoto Protocol.

Instead, the U.S., the EU and the rest of the developed countries formed a unified bloc calling for Kyoto to be scrapped and replaced. Where Kyoto set clear and binding targets for emission reductions, the U.S. plan would have each country decide how much to cut, then submit its plans to international monitoring (with nothing but wishful thinking to ensure that this all keeps the planet’s temperature below catastrophic levels).

And where Kyoto put the burden of responsibility squarely on the rich countries that created the climate crisis, the new plan treats all countries the same.

These kinds of weak proposals were not altogether surprising coming from the U.S. What was shocking was the sudden unity of the rich world around this plan – including many countries that had previously sung the praises of Kyoto.

And there were more betrayals: the EU, which had indicated it would spend $19 to $35 billion a year to help developing countries adapt to climate change, came to Bangkok with a much lower offer – one more in line with the U.S. pledge of… nothing.

Oxfam’s Antonio Hill summed up the negotiations like this: “When the starting gun fired, it became a race to the bottom, with rich countries weakening existing commitments under the international framework.”

The United States has had a similarly influence as a new member of the UN Human Rights Council. Its first big test was Judge Richard Goldstone’s courageous report on Israel’s Gaza onslaught, which found that war crimes had been committed by both the Israeli army and Hamas.

Rather than prove its commitment to international law, the U.S. used its clout to smear the report as “deeply flawed” and to strong-arm the Palestinian Authority into withdrawing a supportive resolution. (The P.A., which faced a furious backlash at home for caving in to U.S. pressure, may introduce a new version.)

And then there are the G-20 summits. When one was held in London in April, it seemed for a moment that there might be some kind of coordinated international attempt to rein in transnational financial speculators and tax dodgers. Sarkozy even pledged to walk out of the summit if it failed to produce serious regulatory commitments.

But the Obama administration had no interest in genuine multilateralism, advocating instead for countries to come up with their own plans (or not) and hope for the best – much like its reckless climate-change plan. Sarkozy, needless to say, did not walk anywhere but to the photo session to have his picture taken with Obama.

Of course, Obama has made some good moves on the world stage – not siding with the coup government in Honduras, supporting a UN Women’s Agency. But a clear pattern has emerged: in areas where other wealthy nations were teetering between principled action and negligence, U.S. interventions have tilted them toward negligence. If this is the new era of multilateralism, it is no prize.

This column was first published in The Nation, naomiklein.org.