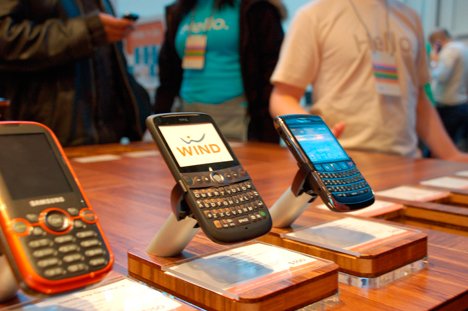 I slept through it though: after a conversation with Roger’s Accounts Receivable department around 8 a.m. I tossed the phone – also serves as my alarm-clock – out into the hall.

But apparently I’m not the sole disgruntled cellularist around these parts.

And according to Wind, the disgruntled is exactly who they’ll be targeting.

Wind is willing to admit they don’t have the infrastructure to really compete at this point in terms of coverage, so until they do the campaign will be based on how they treat you.

Infrastructure isn’t the only hurdle on the track into the Canadian market.

When Tony Clement announced the federal government would be over-turning the CRTC’s decision not to allow Wind’s parent company Globealive access to the Canadian market the Conservatives were dealt harsh criticism.

According to telecom regs, Globealive shouldn’t be active in Canada because the majority of their shares are owned by Cairo-based conglomerate called Orascom. The exception, ironically enough, is part of a Conservative strategy to “liberalize” foreign ownership rules.

Globalive has actually been active in Canada already for years though. Remember those subway ads for subsidised home phone service under the name Yak? Yep, Globealive. Their headquarters are actually right down the street from The Brick at Yonge and King.

Currently Wind’s network spans all the way from Oshawa to that glorious arc in the QEW also know as Hamilton. They have coverage in Calgary too, but for now that’s it. Meaning roaming outside the field will warrant roaming charges, just hopefully not 8 a.m. calls about it.

This map is a little misleading for now, showing their expectations for mid 2010.

For those of us bound to the downtown core, that part is inconsequential. But our Mantioban brothers and sisters are left out for now.

There will however, be salvation soon coming to Ottawanns, Edmintonians and people who live in Vancouver. But not Quebec. Stricter foreign ownership laws there all but guarantee Wind will never forge ground in the Belle Provence.

Wind is limited when it comes to hardware too: there are only four phones to choose from right now and, while they are popular models, not included is the iPhone. There are no immediate plans to add it to the roster either.

If you’re a GTA hermit there would be a noticeable upswing switching to Wind. No system access fee, no activation fee, no 911 connection charge, no incoming call charges, no incoming text charges and call i.d. is included in most plans.

The plans rack up like most of Canada’s existing discount providers (Telus’s Koodo or Bell’s Solo etc.) but they’re talking tough with the big three.

“The other guys are obsessed with each other,” says Wind’s spokesperson. “We’re focused on the customer. And they (the other guys) are going to feel it.”

True enough, at least in the eyes of the British Columbia legal system.

In a month where country’s the two largest competitors have both respectively been legally denied the right to claim the title of most reliable, Wind’s lack of actual infrastructure may not play as big a role as it would have years ago.

And that’s exactly what they’re dealing with. Their network is technically more advanced than their competition, but coverage-wise they’re promoting the equivalent of a Canadian provider circa 2005 or earlier.[rssbreak]