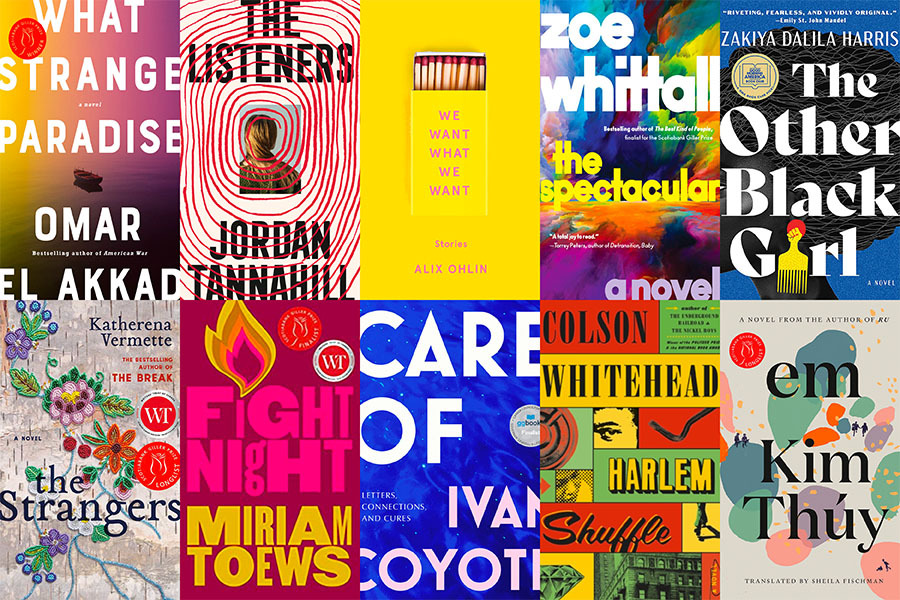 This is an unusual list. For starters, intergenerational conflict is a factor in several of the year’s best. Second, rarely do so many prize winners make it onto my top 10 roster – they don’t really need the love. But these books are absolutely of the moment, each with its own sense of urgency that makes it a must-read. All make excellent gifts.

This year’s Giller winner takes you on a devastating emotional ride with nine-year-old Amir, who survives the trip on a rickety boat crammed with migrants heading to a Greek island. But he’s mercilessly hunted down by an embittered army officer. The story veers back and forth from the journey itself to its aftermath, while the characters range from selfish to selfless – this last represented by the teenage girl determined to protect Amir. Underlying the narrative is a clear-eyed look at privileged tourists, the desperation of refugees and the growing resentment of the unfeeling people whose shores become littered with the corpses of those who didn’t make it. But the key here is the writing – so detailed, insightful and gorgeous, you’ll want to reread paragraphs.

2.The Listeners by Jordan Tannahill (HarperAvenue)

Known best for his plays, Tannahill reveals himself as a novelist fully formed in this story of a woman who hears a hum and connects to others also afflicted by this aural pest. In the process, she alienates herself from her family, her workplace (where she’s seen to have crossed boundaries with a student who also hears the hum), and her friends. Tannahill shows uncommon wisdom about obsession, conspiracy theories and relationships in a dazzling page-turner, which was shortlisted for the Giller prize.

On its face, this is a crime novel, but its essence is its detailed evocation of mid-century Harlem. Carney lives a double life as a furniture salesman and a fence for stolen goods. The story hinges on the dangers of his criminal involvement – sometimes violent – and whether he’ll get caught. By the end you’ll know everything about the design of, say, early-60s sofas, but Whitehead is equally detailed in his descriptions of the period’s rise of both the Black middle class and racial unrest. Once again, Whitehead proves himself one of America’s best essential writers on the Black experience.

Another genius entry – also shortlisted for the Giller – from an author who knows how to blend humour and distress. Here, precocious nine year-old Swiv is the default caregiver for her depressed, pregnant mother and her grandmother, who’s flakey and wise at the same time. The story churns right along, but Toews’s main triumph is the character of Swiv’s exasperating, lovable and seemingly unstoppable grandmother.

Winner of the Writers’ Trust award (now called the Atwood Gibson prize), Vermette’s follow-up to The Break is heartbreaking and inspiring at the same time and widens her palette to embrace many more Indigenous characters and situations. Her mission, via expertly drawn characters struggling with drugs and the legal and children’s aid systems, is to convey how trauma can be baked into the DNA for generations and how difficult it is to break that cycle. Vermette’s craft has taken a major leap here.

Coyote spent their pandemic days responding at length to letters they’d received while on the road performing as one of our country’s most accomplished storytellers. The result is poignant testimony to the struggle of trans people trying to get on with their lives, and an impressive display of Coyote’s skill and empathy.

Another gorgeous, poetic book from an author known for writing about the experience of Vietnamese immigrants in Canada. This time, through exquisite vignettes, she focuses on lives devastated inside Vietnam during the 60s conflict. A section on the My Lai massacre is spectacular, and a later detour to the opening of nail salons across North America offers stunning new information. Beautiful and awful.

8. The Spectacular by Zoe Whittall (HarperAvenue)

In Whittall’s underappreciated cross-generational narrative – much better than her Giller-shortlisted The Best Kind Of People – self-destructive rocker Missy has rejected her scandal-ridden mom, forcing her determined grandmother to take action. This is a valuable take on the pleasure and perils of a life devoted to sex, drugs and rock and roll in a narrative peopled with wholly believable characters and driven by a story that gallops along.

9. We Want What We Want by Alix Ohlin (Astoria)

Ohlin’s crystalline stories hinge on surprise. A young woman returns home from her gap year to find her father married to her best friend. Another woman heads to the rescue of her cousin supposedly fallen prey to a cult, only to get more than she’s asked for. The stories get under your skin so deeply that you don’t want them to end. Fortunately, when they do, the next one’s just as good.

10. The Other Black Girl by Zakiya Dalila Harris (Atria)

Nella is the only Black woman at the prestigious publishing house where she works… until Hazel gets hired. Nella’s ecstatic at first but the new hire may not be a sympathetic sister after all. This is a mixed-genre book – part satire, part thriller verging on horror – and a real page-turner. But one of its essential pleasures emerges from the characters’ myriad references to Black pop culture. You don’t see that very often in a mainstream book. And Black women’s attitudes towards their hair plays into the story in a savvy narrative strategy. This is one sharp debut.

Sally Rooney’s Beautiful World Where Are You (Knopf) – her extended take on the search for love, a purposeful work life and the meaning of art – takes her craft to a new level; The Push by Ashley Audrain (Viking), about a woman who can’t bond with her child, features the unreliable narrator of the year; Astra by Cedar Bowers (McClelland & Stewart) offers wild swings in perspective on the feral, charismatic character Astra, making for an unpredictable ride in this strong debut.