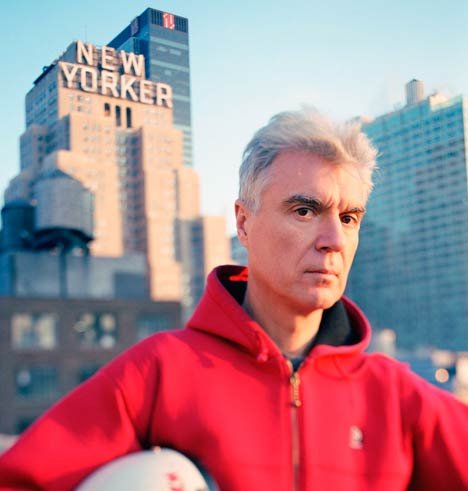 I’m on 9th Avenue at 34th in Manhattan. That is, I’m trapped on 9th at 34th. The light has cycled three times, yet I haven’t gained an inch. To my left, bikes zip by in a separated bike lane, unaffected by the crane that has effectively erased the next hour of my life.

The cyclists are making me jealous. I wish I could leave my (effectively) parked car and hop on my bike, which is inconveniently chained to a fence in Toronto.

This is also the New York where artist, photographer, writer and Talking Head David Byrne has been pedalling for 30 years, as chronicled in his new book, Bicycle Diaries (see review, this page).

“I’ve been riding around here and elsewhere for so long that it just feels second nature,” says Byrne on the phone from his studio in New York.

“People are more ready to accept it as a way of getting around now – in most places of North America – than they were five or 10 years ago.”

He adds that he’s not the kind of cyclist out there proselytizing. He’s just a guy who realizes that biking is faster and more convenient and that it feels good. It also allowed him to collect the thoughts presented in this diary.

And he’s not a fanatic. “When I sit down at dinner with people, it’s not like I only talk about bicycles.”

You can tell by the range of his new book. The conversations aren’t only about flat tires, rusty chains, gear-shifting and how to put on a helmet.

When I suggest that the book is not a standard repair guide, Byrne chuckles. “Maybe it belongs more in urban planning – like Jane Jacobs’s books.”

Bicycle Diaries contains personal entries collected over years spent absorbing landscapes in cities around the world from the slightly elevated vantage point of a bike saddle.

He journeys through Berlin, Istanbul, Buenos Aires and a slew of other selected cities. Toronto doesn’t make it into the mix, but Byrne places us somewhere on the easier side of bike travel.

“[Toronto’s] pretty flat. Big streets aren’t that bike-friendly, but because it’s a grid, you can get somewhere on a back street where you’re not fighting traffic and trolleys,” he says, adding that he can’t bring his bike up for his International Festival of Authors gig but may very well rent one once here.

One thing that would be welcome here are his designs for bike locking posts. You can’t miss them if you’re in New York. Each relates to the area it’s placed in. The MoMA’s is a wacky blob. Makes sense. The Ladies’ Mile, a high heel, is on 5th Avenue. All actually came about completely unexpectedly.

“They were doodles I did for the amusement of the Department of Transportation (DOT),” says Byrne. “Their response was, We love these. If you can produce them, we have the authority to put them up.'”

Byrne’s advocacy avoids the banal, though his main intent is to convey the simple joy of cycling. He’s not condescending or guilting you from an eco perspective. Biking, says Byrne, is just something fun that makes sense, too.

Byrne is more of an observer on the cusp of a massive change.

“It’s been exciting and surprising,” he says of the bit-by-bit changes in his city. “Every few months another little thing goes in – a lane, a protected street – or [Janette] Sadik-Khan [NYC’s DOT commish] will close off a dead traffic zone and turn it into a little sitting area with free WiFi.”

But Byrne’s perspective may not apply everywhere – there will be cities that fail. “Some of them are in deep shit,” Byrne warns, mostly because of unsustainable sprawl.

The overall vision is positive, though.

Maybe it’s best to put this chronicle next to another travel diary that doesn’t dwell on the technicalities of the trip, Che Guevara’s The Motorcycle Diaries – a book that, as Byrne puts it, “is not about motorcycles either.”

1954 Moves to Hamilton, Ontario (!) before growing up in Baltimore

1986 Writes, directs and appears in the film True Stories