The show you wont see…

The Bellevue Square Park wading pool on this cloudy, cool day is empty, just a slightly recessed circle of concrete.. 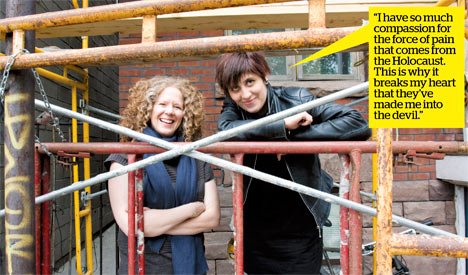 The Bellevue Square Park wading pool on this cloudy, cool day is empty, just a slightly recessed circle of concrete. But I’m imagining it filled, not with water but with a pack of eighth graders playing in a mah-jong tournament with six elderly Jewish women.

That was Reena Katz’s idea, part of the four-pronged art project Each Hand As They Are Called, designed to probe the social history of Kensington Market. It was a show originally commissioned by the Koffler Gallery via independent curator Kim Simon and later brought into a marketing partnership with the Luminato festival.

You may not see any of it, though. Last month, in a startling move, the Koffler suddenly dissociated itself from the exhibit and specifically from Katz herself, though it left the project funding intact. The reason? The Koffler Centre for the Arts believes that Katz’s anti-Zionist views on Israel violate the centre’s core values.

Here we are again in the middle of the seething Middle East debate. Add this furor to the one over the Rachel Corrie play that CanStage couldn’t bring itself to mount, and to the Passe Muraille’s staging of Seven Jewish Children, a piece by Caryl Churchill about the psychic harm done to Israelis by the occupation, which drew heat from B’nai Brith.

But this one’s different. The artist isn’t an import, but a homegrown Jewish girl, a queer and a Jewish studies teacher no less (disclosure: my daughter was in her class), an activist who embraces her culture and is deeply loyal to her ancestry.

And the art project in dispute isn’t about conflict in a far-off desert, but celebrates Judaism’s Toronto roots. (See The Show That Got Away, this page.)

Is mainstream Judaism picking on the wrong dissident?

“Core Jewish values,'” Katz muses, sitting in a Kensington cafe, her voice trembling with a combo of anger and upset. “What is a core Jewish value? Tikkun olam [Hebrew for “making the world a better place”]. I was raised to love my culture. Why is it that my thinking doesn’t come from Jewish values and theirs does?”

Cue the Talmudic scholars, please. Koffler Centre executive director Lori Starr has her version of how the covenant got broken. She recalls how, while trying to arrange a celebration of Katz’s show Each Hand As They Are Called, she clicked on Katz’s Facebook page and noticed the Israeli Apartheid Week icon. She also discovered that Katz had signed a petition calling for Zionism to be relegated to the “dustbin of history.”

Starr right away knew she had a problem. “To refer to Israel as an apartheid state is to call Israel a criminal state and to suggest that it be shut down,” Starr says.

But what took her so long to figure out that Katz has radical views? “I knew Reena did critical work based on human rights,” says curator Simon, “and I did say to Mona [Filip, the Koffler Gallery’s curator] that Reena did activist work around Palestine/Israel.”

“It’s all over my website,” says Katz. “They could have done the research a year and a half ago, when we began the project.”

Starr allows that the Koffler team may have missed something when the work was originally commissioned. “We learned a valuable lessons about the level of due diligence required of us,” she says, measuring her words carefully. But she doesn’t accept that the Koffler’s decision to dissociate itself from the show is tantamount to scrapping it.

“The future of the show was left to the artist,” she insists.

Not so fast. That assessment seems more than a bit disingenuous and underestimates the way mainstream Jewish organizations in Toronto can close ranks. Within two days of the Koffler’s notice to community members, the Baycrest Centre and a vocal coach backed out, seriously setting back the whole enterprise (see The End Of The Line).

“We had a great working relationship with Baycrest [social worker] Bianca Stern,” says Katz. “I was ready to negotiate. For the whole next week I was negotiating. In the end, she refused a meeting. She said she told the group [of elders] what was going on and they didn’t want to participate. I asked if I could speak to them myself and she said no.”

Stern wouldn’t talk to NOW, and Baycrest spokesperson Kelly Connolly wouldn’t either, sending instead a terse note explaining that the institution couldn’t support the exhibit and neither would the six Jewish elders.

“It reminded me of how I felt when I couldn’t come out to my community,” says Katz. “It was a very closeted feeling, as if there were a fortress around my elders and I couldn’t penetrate it, not because of my actions but because of how my actions and thoughts are being perceived.”

The disconnect between what Katz thinks and what Starr and other representatives of official Jewry think she thinks is a key component of this controversy.

Howard English, vice-president of communications at the United Jewish Appeal, one of the Koffler’s funders, tells me, “When somebody says Israel’s treatment of the Palestinians is not fair, therefore Israel should not exist as a Jewish state, I draw the line.”

The word “apartheid,” he says, is “used as a propaganda term to delegitimize Israel, which is the first step in the pursuit of the demise of the Jewish state.”

English maintains that mainstream Jewish organizations have no problem with those who criticize Israel’s treatment of the Palestinians. If that’s true, it represents a significant shift, but before anyone starts celebrating this development, it should be noted that English goes on to say that these orgs will not, on principle, even dialogue with those who want to alter the Jewish character of Israel or, by inference, those who support a binational Jewish/Palestinian state.

But Katz says her critics aren’t attuned to the massive spectrum of Jewish opinion on the Mideast dispute and that none of them even asked her what her views are. Here’s what she would have told them: “We have to make a separation between anti-Zionism as a position and a prescription for the future of the region.

“As Jews, we need to look at the history of what we’ve done in the region, stop abusing the human rights of Palestinians and work together to find a coexistent answer to this global problem. One-state solution? Two-state? I’m not even going there – that’s for the people in the region to decide.”

Simon and Katz are hoping to salvage something of the exhibit. That depends on whether the budget holds and if the Koffler will accept changes in the project.

“My relationship to every single aspect of the project has changed, and I’m not willing to pretend that it hasn’t and do this sweet little reverent piece,” Katz says.

“There’s so much fear, and I have compassion for that fear. This is why it breaks my heart that they’ve made me into the devil, because I have so much compassion for the force of pain that comes from the Holocaust.

“I’m the wrong person to vilify.”

May 8 Koffler Centre executive director Lori Starr calls Reena Katz and independent curator Kim Simon into a morning meeting to inform the team that, because of Katz’s views on Israel, the centre is dissociating itself from Each Hand As They Are Called. Funding is intact and the show will go on, promises Starr, but Koffler’s name and logo cannot be connected to it.

Barely an hour later, Starr sends out a memorandum to friends of the centre, other Jewish institutions and associates of the gallery announcing the decision and the reason for it.

By afternoon, Baycrest has pulled its support, effectively eliminating the mah-jong component.

By the weekend, vocal coach Stella Walker, a collaborator on the Barry Sisters component, has withdrawn from the project.

May 13 Ongoing negotiations with the Koffler over changes to budgets and elements of the project mean that Cecilia Berkovic’s posters are late going to the printer. Practically all aspects of Each Hand are seriously affected.

May 14 The show fails to open on the original opening date.

May 29 Luminato announces that the mah-jong component of Each Hand is cancelled.

To date Lawyers for Katz and the Koffler Centre continue negotiations to determine the future of the project.