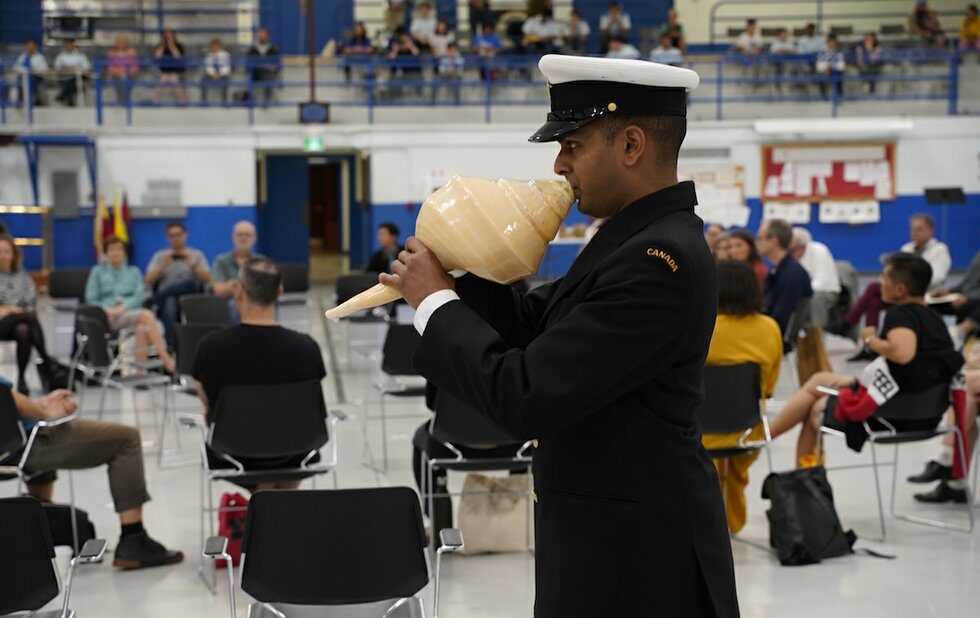 Artist Althea Thauberger and composer Kite's collaborative performance of with the brass and reed band of the HMCS York was a highlight of the year.

This year, Torontonians saw a new vision of the city thanks to the Toronto Biennial of Art. The inaugural, 72-day event was a thoughtful if low-key blockbuster that spanned several sites along Lake Ontario. Curators Candice Hopkins and Tairone Bastien, brought an outsider’s perspective on the waterfront as a site of rich thematic potential. They commissioned a video by New Mineral Collective, a group of artists based in Tromsø, Norway, that revealed the innate strangeness of Ontario Place, a view local curators may have missed.

Homegrown artists are typically under-represented in the international art world, but current and former Toronto residents are changing that. Brendan Fernandes was the star of this year’s Whitney Biennial in New York Berlin-based Stephanie Comilang won the Sobey Art Award and the prolific sculptor Tau Lewis exhibited in Miami, Los Angeles and Yorkshire.

Meanwhile, the Art Gallery of Ontario’s new pricing scheme – free admission for visitors 25 and under and a $35 annual pass – is here to stay, making one of the city’s biggest museums a bit more accessible. The city is following suit, firming up plans to expand Nuit Blanche to North York and Etobicoke, part of a commitment to ensure public art works are installed across the city, and not just downtown.

Here is our list of the best Toronto’s art scene had to offer in 2019.

Vancouver-based Thauberger and Montreal composer Kite collaborated with the brass and reed band of the HMCS York, a reserve division of the Royal Canadian Navy located at the foot of Bathurst, on this remarkable performance.

Call To Arms (which was also presented as an installation work) saw conch shells used as instruments to play a musical score based on the Fibonacci sequence (each number is the sum of the two previous numbers). The score echoed the conch’s nautilus shape, which the musicians further echoed while walking in a slow procession to the centre of a spiral. The coordination of two groups of people that rarely work together (artists and the military) was the point and executed to sublime effect.

Drowned World at Cinesphere, curated by Charles Stankievech for Toronto Biennial of Art

Artist Stankievech made resplendent use of the Cinesphere’s giant IMAX screen with a five-hour film odyssey during the Biennial that included works about the deep sea, water, and islands. The result was a truly immersive experience.

Casting the Cinesphere as a monument that embodies both ambition and decline, the artist’s accomplishment is also notable for envisioning such a resonant use of the Cinesphere – turning the theatre into a holistic space for visual and sound installation in a way we haven’t quite seen before. A highlight was the audio work For Ann (Rising), from the 1969 composition by James Tenney. Based on the auditory phenomenon known as the Shepard tone (the illusion of a sound that is continually rising), this new version in multichannel sound proved how perfectly suited the Cinesphere is for immersive art, not just retro blockbusters. 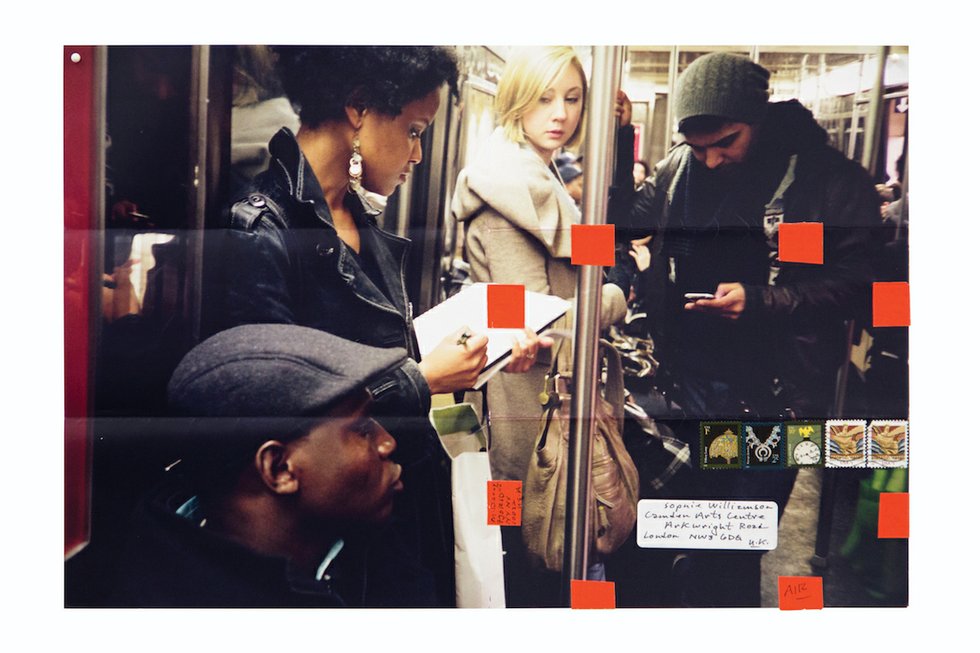 Moyra Davey’s Subway Writers (2011/2014), a chromogenic-print photograph with tape, postage and ink, was on display at Ryerson Image Centre as part of a survey show.

There was an off-the-cuff virtuosity to the work New York-based Canadian photographer Davey presented in this expansive survey show. Her colour-saturated photo-mail-artworks were the most stunning. Davey took intimate snapshots of people on the subway, or ultra close-up images of pennies, folded them up and mailed them to people in her life. The resulting works were presented with fluorescent tape she used to fold and pack the photos, making for a compelling visual puzzle. Once decoded as mailing remnants, the works cannily vacillated in meaning between their past lives in the postal system and newfound status as art on the wall.

What Do We Mean When We Say “Content Moderation”? at Art Museum, University of Toronto

Organized by designer/curator Pegah Vaezi as part of her Master of Visual Studies degree at the University of Toronto, this symposium asked essential questions about how art and activism are affected by the web.

How to make web-based artworks was not at issue – instead, the discussion focused on what an ethical internet would look like. Panelists included the Electronic Frontier Foundation’s Jillian C. York and Jonathon Penney from U of T’s world-renowned cyber-security think tank Citizen Lab. A presentation by Montreal artist Skawennati, cofounder of the Aboriginal Territories in Cyberspace project, lightened the event’s dystopian vibe with a reminder that the idealistic goals of the early internet are still within reach.

The goal of this three-day event organized by the AGO and the Power Plant was to bring together Black curators from across the country, strengthen networks, excavate forgotten Black art made in previous eras and provide support to young Black artists in the present.

“While there is Black Art in the U.S. and the UK, a more mainstream knowledge of Black artists’ practice is only just emerging in Canada,” writer and Canadian Art associate editor Yaniya Lee tells NOW. “Canada as a nation-state still thinks of itself as European. In actuality, Black people have been part of this settler colony for over 400 years.”

She adds that the forum ended up being “very practical. After thinking and theorizing about these issues, what comes next?” 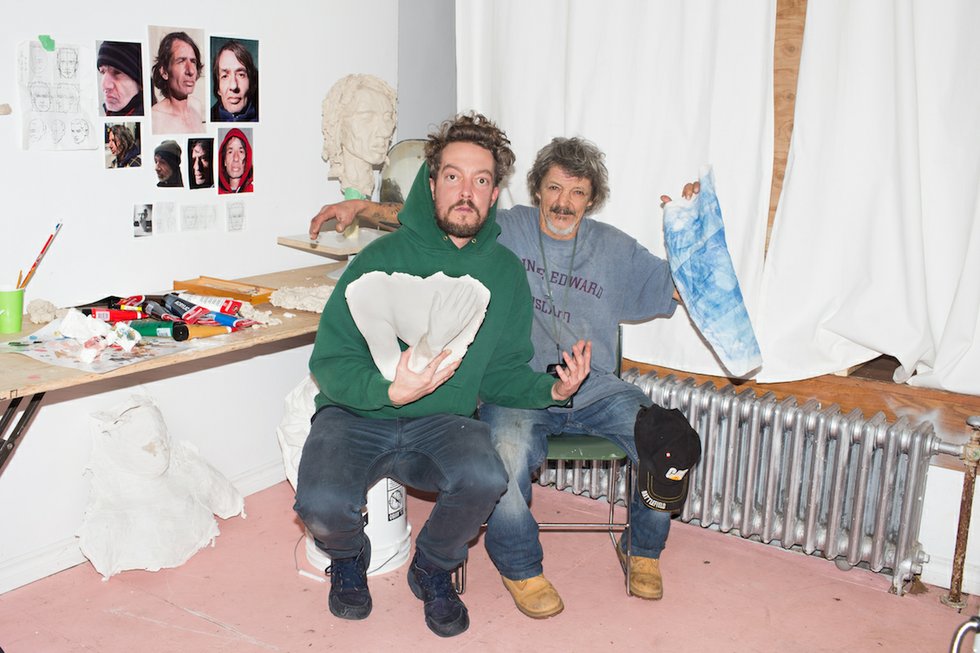 Artist Jeff Bierk is known for his large-scale photo works made in collaboration with friends who live on the streets of Toronto. Run out of Bierk’s studio on Dupont, the Jimmy James Evans Friendly Meeting Place and Centre for the Arts is an extension of his art practice.

Since launching in late 2018, Bierk has made the space available, for free, as a drop-in centre, and for a host of events, including art exhibitions and workshops put on by the mental health non-profit, Regeneration Community Services (which resulted in an exhibition at the independent art space the Loon). The goal is to resist gentrification or, as Bierk says, to assert the value of “lives that are often erased in a profit-driven urban context.”

Named for the nearby Redpath Sugar Refinery, this waterfront space launched in the fall. Curators Ala Roushan and Xenia Benivolski initiated the project so they could propose alternative formats for public artworks, which typically take the form of sculpture or mural.

Instead, SUGAR offers themed programs that invite the public to attend an ongoing series of lectures and performances. A three-year experiment partially funded by developer Daniels Waterfront, SUGAR is a way to continue having vibrant and eclectic dialogues about city life that unaffordable rent and housing costs are putting under threat.

Correction: In an earlier version of this story, writer Yaniya Lee was misquoted due to an editing error. This story has been updated.