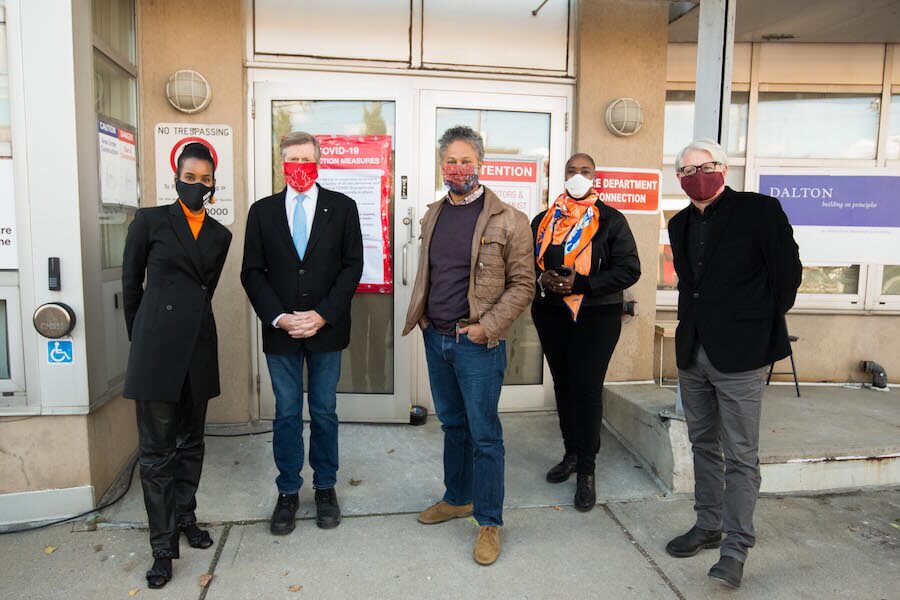 The new Nia Centre for the Arts wants to be a community hub in the rapidly gentrifying Little Jamaica neighbourhood near Eglinton and Oakwood.

On October 16, the arts centre announced the groundbreaking of a renovation and expansion of its space at 524 Oakwood that will turn the building into Canada’s first multidisciplinary professional art space dedicated to Black art.

Over the past decade Nia morphed from a mere idea to a concrete space for artist residencies, youth development programs, Toronto’s first Black art fair and countless mentorship programs.

Since Nia Centre’s inception the impetus has been to bring in the community and offer accessible art spaces to Black artists.

Businesses in the surrounding neighbourhood have shuttered at alarming rates throughout the construction of the Eglinton Crosstown. Residents and commercial tenants are being priced out of the area.

“It’s tough to feel like you’re building something in a historically Black community that may not be that way in the coming years,” said Nia Centre executive director Alica Hall. “It just feels like we’re part of anchoring that history and amplifying it.”

Hall speaks of the synergy between the first wave of Black Carribean immigrants that came to Toronto and made Little Jamaica their home five decades ago and the work Nia Centre has to do to continue that legacy. The building the organization calls home is city-owned. In the 70s and 80s, it was called Isabella’s Ballroom and hosted soca, calypso and reggae shows.

“The fact that we’re able to build on that energy, that creativity, that resilience and put it into 524 Oakwood is incredibly important to me, to our community and to our elders.”

Nia Centre will be expanded from 14,000 to 15,000 square feet. The building will be gutted from inside and both floors will be remodelled. The endeavour will cost around $7.5 million and they have already raised $6 million with help from the municipal and federal governments, as well as the United Way.

The centre is reaching out to the community to fundraise the final $1.5 million and has raised $250,000 so far.

The team initially struggled to secure funding. Donors had little interest in or little knowledge of Black art in Toronto, and not everyone saw value in an organization like Nia Centre.

“I’ve talked to hundreds of people in the past few years, just trying to raise awareness because as a charity we don’t have the marketing dollars and it’s not like everyone knows about Nia Centre,” says Hall. “We want to build something that people are invested in.”

“This new space will continue to bring people together and allow everyone to experience the art that is rooted in Black Canadian traditions and that’s incredibly important because we all need to continue to educate ourselves on the culture and experiences of others,” he said in a pre-recorded video message. “Having a deeper understanding of one another is crucial to moving forward on addressing issues that affect Black and other racialized communities in Canada.”

“When you think about how Black artists and artistic traditions are perceived and valued, it’s like Canada and Toronto have been put on the map because of Black labour and Black artistic creativity,” said Hall. “So, yes, the head of state needs to recognize that, invest in it and support it.”

The future of Nia Centre

Nia Centre was born out of conversations between local artist Ian Kamau and the United Way Youth Challenge Fund in 2008. Kamau had the idea for an arts centre to create a sense of  longevity and legacy for Black youth and artists in Toronto.

A group of artists and curators came together to determine the breadth of the programming. In 2015, they found their current location and the dream keeps on growing.

Particularly integral to Nia Centre’s programming is the new youth hub, a space in the building for drop-in, after school programs and artistic workshops.

“In this neighbourhood there are a limited amount of spaces for young people other than the two libraries, one on Oakwood, one on Eglinton. We’re excited to have the ability to actually have a room that is solely designated to support young people,” says Hall.

Nia is the Swahili word for purpose and the organization’s purpose is rooted in dismantling barriers to access. Barriers like finding affordable studio space in the city, finding spaces or opportunities to exhibit work and gain a wider audience or struggling to get funding and financial support.

“Historically the art councils and sponsors haven’t invested in Black artists,” explains Hall. “As a result, I would say we’ve lost a generation of artists. They just didn’t have the support to continue creating.”

Hall doesn’t want to see this cycle repeat. She believes having an art space committed to permanent, year-round support for these artists can help rectify that loss.

“We know when funders or corporations show up, it’s usually Black History Month, then the rest of the year it’s crickets. But, you can’t build a career off of one month.”

Note: A previous version of this story stated Nia Centre was doubling in size from 7,000 to 14,000 square feet. The story has been updated with correct information.