Review: Our Fathers, Sons, Lovers And Little Brothers is a powerful #BlackLivesMatter story 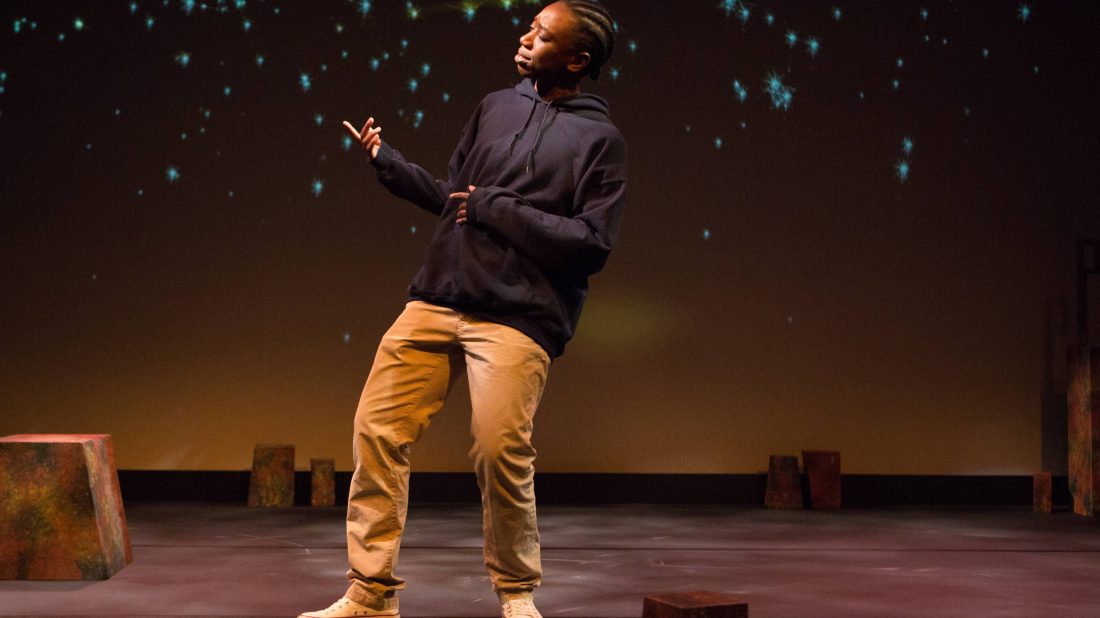 Amidst the impassioned protests, demonstrations, debates, trials, funerals and op-eds following the violent recent deaths of hundreds of Black men and boys in America, one thing has always been missing: the first-hand testimonies of the deceased. Makame K. Simamba’s powerful solo play seeks to change that. She lets one murdered Black youth speak for himself.

At the top of the show, an unnamed young man (Simamba) lies sprawled out on the floor, only his legs visible to the audience. Gradually, he is jerkily re-animated, and he finds himself in a mysterious, alien world, stars twinkling behind him on a video screen. Is he in heaven? Limbo? Soon he discovers an illuminated book called Your Journey To The Ancestors: A Step By Step Instruction Manual, and as he reads aloud from each step, his tragic story eventually unspools.

His name is Slimm, he’s 17 years old, and he’s from Miami. In graceful flashbacks, we see scenes with his mother and his pal, Dennis, learn that he’s been suspended from high school for carrying weed. We travel back even further to a car trip with his dad and siblings, when his dad instructs Slimm’s older brother about what to do if he’s driving and gets pulled over by a police officer – a grim foreshadowing of what might be coming. We eavesdrop on a phone conversation he has with his girlfriend. And, in one of the loveliest scenes in the play, we see him come back from flight camp and reveal to his mom that he wants to become a pilot.

The unusual setting and the interrupted readings from the manual allow director Donna-Michelle St. Bernard to jump around in time and space with maximum clarity and effectiveness. Designers Trevor Schwellnus (sets and video), Andrea Lundy (lighting) and Diana Reyes (sound) help orient us so we’re never confused about what’s going on or where we are. And choreographic consultant Shakeil Rollock’s movement – from that intriguing opening scene to a sequence brimming with ceremonial significance near the end – adds yet another layer to the story.

Simamba’s performance is as rich and nuanced as her Dora Award-winning script. Her Slimm, outfitted in a hoodie and walking with a hint of a swagger, is an ordinary kid who likes basketball, hip-hop and Krispy Kreme doughnuts. He has dreams, and people who love him. The way Simamba fills in the outlines of his young life is efficient and unsentimental.

All of this leads up to a staggering 10-minute scene in which Slimm acknowledges his ancestors. In clear, simple cadences, he recites the dozens of names of Black men and boys – some famous, some unknown – who have been murdered over a century in America. He tells us their ages and the year in which they died. And then he tells us his own name.

Some of the Tarragon Theatre’s publicity material – and other reviews – have mentioned this name, but I think it’s best to let you hear it yourself. It’s one of the most moving moments you’ll experience at the theatre this year. And it brings dignity and grace and gives voice to a person whose murder partly inspired a world-wide movement and call for justice and change.