Review: Draw Me Close is an unforgettable experience 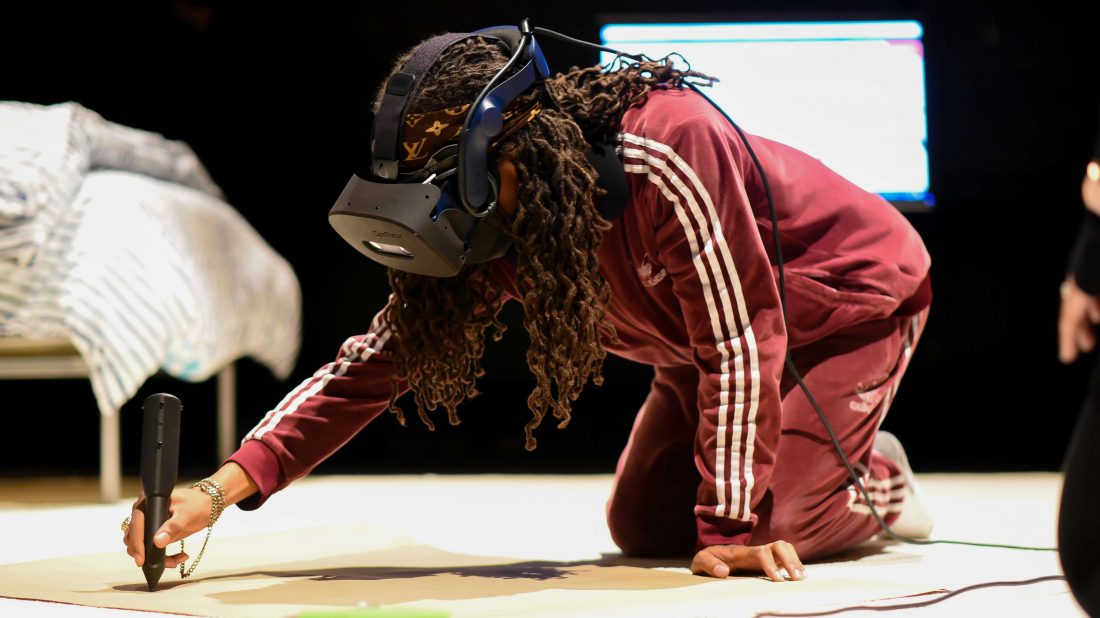 DRAW ME CLOSE by Jordan Tannahill (Soulpepper/National Film Board). At the Young Centre for the Performing Arts (50 Tank House). Runs to December 12. Sold out. soulpepper.ca. Rating: NNNNN

Since the pandemic, words like “immersive,” “hybrid,” “virtual” and “intimate” have been used so freely they’ve lost any meaning. But they all apply to Jordan Tannahill’s Draw Me Close, a work that brilliantly combines live performance, audience participation, animation and virtual reality (VR) to evoke an experience that works on a heightened, extrasensory level.

Wearing a sanitized VR headset, you open a door and enter a virtual recreation of playwright Tannahill’s childhood home, which has been illustrated (both the interior and exterior) in black and white with care by Olie Kay and the late Teva Harrison. There’s a garden outside; inside are the typical suburban possessions: TV, toys, table covered with a magazine, artwork. Note: pay attention to the artwork, particularly any photographs, as the show progresses. Besides being a work about a son’s relationship with his mother – something Tannahill’s dealt with in his novel Liminal and his dance-theatre piece Declarations – Draw Me Close is also a mini portrait of the artist as a young queer man.

Fittingly, Tannahill himself guides you through the experience via a pre-recorded audio track. In this first scene, he is a young kid, and when his mother (Maggie Huculak in the performance I saw; Caroline Gillis alternates in the role) opens the door and excitedly presents him – i.e., you – with a rolled up sheaf of paper, you immediately get to work drawing something, which she encourages.

Unfortunately, that same spontaneous act of creation leads to a brutal domestic fight after Jordan’s unseen dad comes home. And gradually a picture emerges of the mother’s frustrated, limited life. As Jordan gets older, his feelings about her change, particularly when he watches her, unseen and much older, out in the garden, and he has a creative epiphany about other people’s lives. By the end, which I won’t spoil, his feelings for her are a complicated mixture of love, gratitude and guilt.

The technical aspects of the show are remarkable; time shifts magically, as in a dream, walls dissolve, bed-time stories come to life during the telling. But Tannahill has provided such fine details – a glass of wine, the turning of a back, the flipping of a page in an art book – that these vignettes suggest a complete world. Although the show has evolved over five years, the presence of certain words – vaccine, plague, the Spanish flu – resonate especially now.

Draw Me Close consists of two parts. In the first, you participate in the show with the VR headset. In the second, you take off the headset and watch while the next audience member enters and experiences the same show.

This second part acts almost like a behind-the-scenes, making-of documentary of the experience you’ve just had. More importantly, it lets you admire the actor’s performance; although VR technology can suggest a performer’s movement and posture, and of course the vocal performance remains intact, there’s nothing like seeing an actor’s face, particularly her eyes, to communicate the depth of what they’re feeling. (I recognized Huculak’s voice and empathetic spirit, even separated by a headset, early on.)

And the piece’s most emotionally charged moment, which means so much at a time when touch is loaded with significance, works effectively in both the VR and the non-VR versions. This moment, combined with another just after, adds up to one of the most moving things I’ve experienced in theatre or film.

Although the run of Draw Me Close is sold out, here’s hoping it adds more performances. At the very least it should encourage artists to take more artistic and technical risks in exploring the human condition.

In a recent NOW What? podcast, NOW’s Norman Wilner talks with the Giller Prize-nominated Tannahill about writing for the stage, transcendence and conflict in Canada’s literary community.