JESUS HOPPED THE A TRAIN by Stephen Adly Guirgis (Soulpepper). At the Young Centre for the Performing Arts (50 Tank. 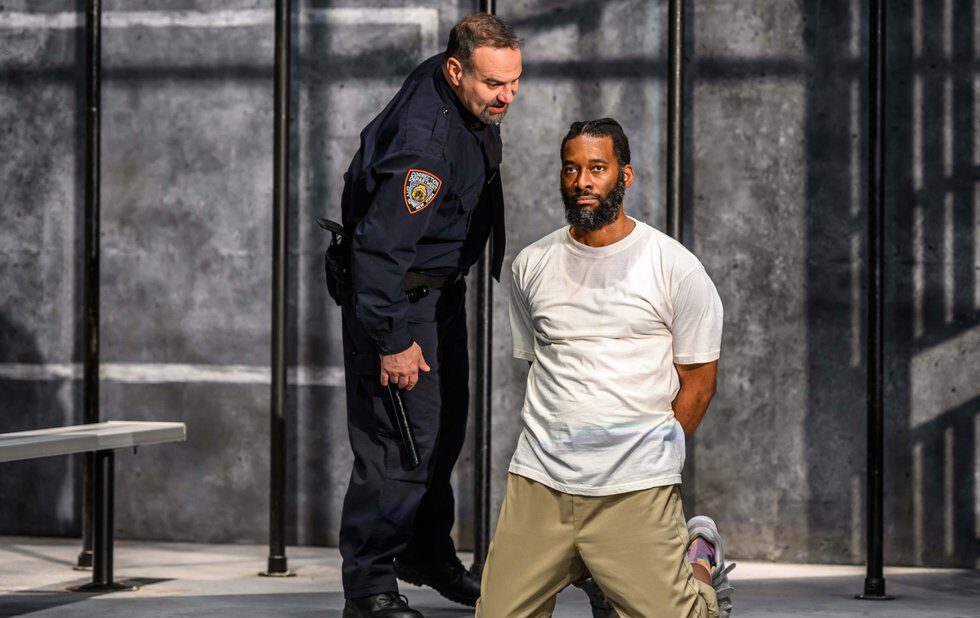 Even in showboat roles, Tony Nappo (left) and Daren A. Herbert know when to dial back their characters' flamboyance for the sake of narrative momentum.

Soulpeppers production of Stephen Adly Guirgiss Jesus Hopped The A Train unfolds on a stage whose spartan decor consists entirely of emaciated benches and many, many long steel bars (set designed by Ken MacKenzie). That were taken to jail for a couple of diverting, unnerving hours struck me as novel. Yet, with 2.3 million Americans incarcerated today, really, why arent there more American plays set in prison?

While set on Rikers Island in New York, the play is not about the modern mire of mass incarceration. The convicts at its core arent doing time for minor offences: ones pled guilty to murder the other is on trail for attempted murder. This prison storys philosophical quandaries are the evergreen ones about justice and mercy, rehabilitation and redemption, and what sort of outlaws tug at our sympathies.

Jesus premiered in 2000 in an off-Broadway production directed by Philip Seymour Hoffman. Its verbosity anchored in expletive-laden, pop culture-referencing, racially coded, streetwise vernacular invokes the ubiquitous influences of Tarantino movies and Death Row gangsta rap on so much dialogue from this period and the talk is intoxicating.

Whatever their repellent, even appalling aspects, each character in this play is eerily charismatic. Valdez (Tony Nappo), the prison guard who regularly unleashes batteries of racist and homophobic threats in the name of judicial righteousness, and Lucius (Daren A. Herbert), the mass murderer and cheerful chatterbox whos found god and works himself into prayer-rants like Muhammad Ali at the pulpit, are both magnetic.

Mary Jane (Diana Donnelly) is a defence attorney whose fierce intelligence and fraught personal background grants her unique insights into her clients plights. Guirgis has given almost everyone soliloquies where key themes can get overstated, and Mary Janes are a little more schematic than the others. Nevertheless, Donnelly makes each of her characters confessions riveting. She gives a performance that somehow manages to exude overwhelming emotional complexity while maintaining an attitude-heavy facade.

Deftly helmed by Soulpeppers artistic director Weyni Mengesha, whose dazzling production of A Streetcar Named Desire lingers in my mind months after seeing it, this Jesus is fleet, tidy and gorgeously acted.

Im not sure if the text itself hits our social conscience quite as hard as it wants to, but I applaud the efforts to usher such stories of the marginalized and institutionally disappeared before our citys more affluent audiences.