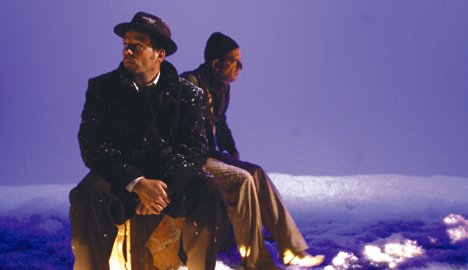 Sink your teeth into WASP culture in The Dining Room.

The upper-class east coast North American WASP might be an endangered species, but A.R. Gurney’s The Dining Room serves them up with humour, poignancy and a bit of a sting.[rssbreak]

This revival of his 1981 work interweaves dozens of characters in time-hopping vignettes that take place in a spacious room anchored by a 19th-century dining room table. A flaky daughter pleads with her father to take her and her children in during a separation. Two teens raid the liquor cabinet. A matriarch with Alzheimer’s fails to remember her own children during Christmas dinner.

Gurney’s script is sharply written, layered and evocative, with some scenes overlapping, their characters lingering like ghosts.

In a brilliant bit of staging, Down n’ Out Productions performs the work in a large room in historic Campbell House, where history clings to every windowsill and chair. Director Jonathan Geenen and busy stage manager Natalie Gisele choreograph the stage traffic with skill, allowing each scene to find its rhythm.

There’s no discernible arc to the show, but the second half feels darker, and Gurney’s ambivalent feelings toward his people make room for an elegiac look at dying traditions and graceful social interaction that feels achingly relevant to our text-message-obsessed times.

The play’s also a terrific ensemble showcase for actors Terrence Bryant, Ben Clost, Madeleine Donohue, Deborah Drakeford, Michael Spasevski and Sarah Wilson. It’d be unfair to single out one each uses every trick in his or her bag to bring Gurney’s tragicomic characters to life for two unforgettable hours.