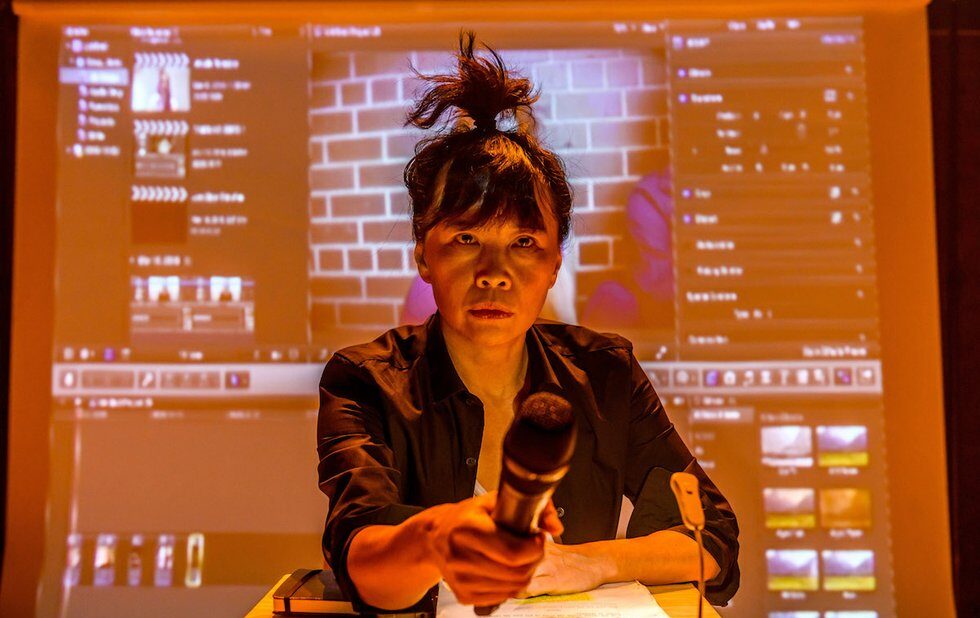 The origin story of Unsafe is complicated. Fortunately (or not) this origin story is woven into the play itself.

Former Canadian Stage artistic director Matthew Jocelyn commissioned playwright Zack Russell to create a show about Eli Langer, the Toronto artist charged with child pornography in 1993. At some point the premise broadened, or became updated, to address contemporary forms of censorship such as online call-outs and knee-jerk shaming. At some point Russell invited Sook-Yin Lee to collaborate. While Russell wanted to make fiction, Lee envisioned Unsafe as documentary theatre, drawing upon her storied background as an interviewer for the CBC and MuchMusic. At some point Lees vision eclipsed that of Russells, who eventually retreated from the project altogether. Hes now credited as consultant while lending his persona as Lees onstage sidekick, Zack Russell, endearingly embodied by actor-pianist Christo Graham.

Directed by Sarah Garton Stanley, Unsafe has finally manifested in a production that looks like a talk show, unfolds like a variety show, ends with a truncated version of a town hall meeting and, ultimately, despite its busy meta-narrative, has little to say about outrage culture. The conversation is not moved forward. As my companion put it, Unsafe was about as satisfying as scrolling through a social media feed. Im not even sure Unsafe offers a clear idea as to what unsafe means.

In one sequence Lee and Graham text each other, their iMessages projected on the screen standing between them in another, Lee, naked save her wireless belt, and Graham, fully dressed, mimic two figures in Edouard Manets Le Dejeuner Sur Lherbe in another, Lee, naked again, sings the chorus from Hairs Let The Sunshine In. How these sequences contribute to Unsafes thematic survey seems tangential at best. Like many others, such sequences seem conceived primarily to expand the range of theatrical devices in an otherwise not especially theatrical work.

As a gesture of artistic risk, Lees nudity feels flimsy, especially given that she was one of the stars of John Cameron Mitchells cinematic sex bonanza Shortbus, a gig which, for a time, placed Lees employment with the CBC in peril. Early in Unsafe, Lee shares a pre-scandal image of her snuggling a giant photograph of Jian Ghomeshi, though this too seems overplayed as a gesture of artistic risk: its not shocking that Lee, like many of her colleagues, expressed affection toward a celebrity broadcaster that plenty of people once liked. Theres a sequence in which Lee, with Graham filming her for live-feed, recounts the demise of a 12-year relationship whose issues were exacerbated by her work on Unsafe. The story itself cant help but earn our sympathy, but the manner in which it is spontaneously delivered fits all too neatly into Unsafes air of faux-casualness which is itself very, very CBC.

Many of those interviewed for Unsafe Jocelyn, Globe And Mail critic Kate Taylor, priest and activist Maggie Helwig and artist jes sachse among them took far greater risks in their willingness to grapple with the plays fraught theme and its impact on their practice, opening themselves up to public scrutiny in a series of shoddily recorded and unflatteringly lit video segments. Any of these testimonies could have been mined for deeper investigation, but as Unsafe hops from one sequence to another, such opportunities are abandoned or regarded only superficially.

In short, while Lees interest in her subject matter feels genuine, Unsafe resembles an artists workbook more than a finished work. And for all its hubbub, it plays things pretty safe.