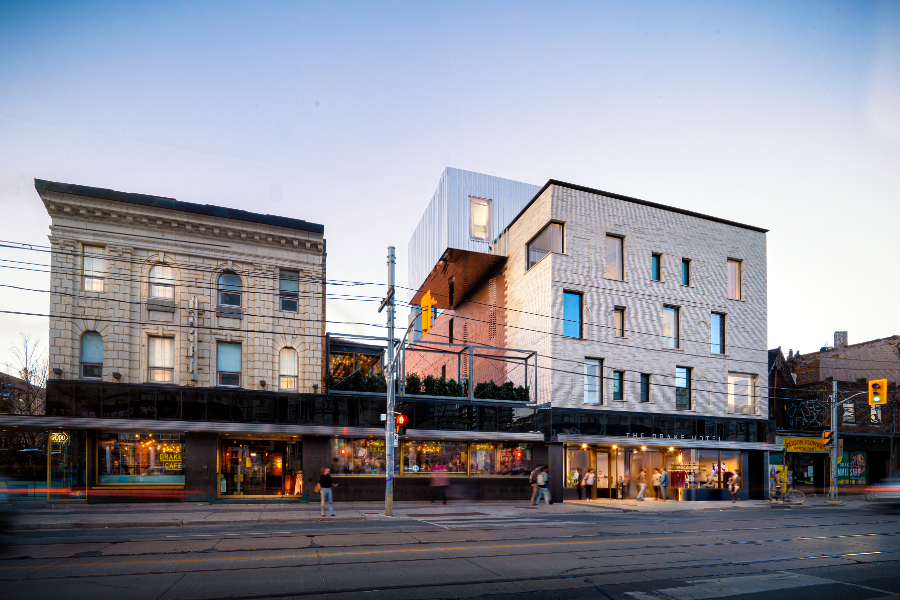 An exterior look at the Drake Hotel's new expansion

The Drake Hotel is expanding with a second building on Queen West.

The historic hotel will open 32 new guest rooms on December 1, bringing the total up to 51. The new five-storey expansion building is called the Modern Wing and is located just east of the original Drake building, which is now renamed the Classic Wing.

The three-floor original building still houses the Drake Lounge, restaurant, cafe, Sky Yard rooftop patio and Drake Underground music venue. The new building connects to all the amenities and hospitality services while adding a new lobby bar and more than double the amount of hotel rooms.

The addition is built and designed by the Drake’s in-house design team alongside Diamond Schmitt Architects, John Tong of +tongtong and international studio DesignAgency, and has art curation by Drake curator Ashley Mulvihill (who also helmed curation for the new Waverley building and the rebuilt Silver Dollar Room).

The Drake Hotel has existed near Queen and Dufferin in various incarnations since 1890, but was bought and reimagined as a boutique “arts and culture hub” 17 years ago by Jeff Stober – it’s an influential location that, alongside its historic neighbour the Gladstone Hotel, presaged the gentrification of West Queen West and nearby Parkdale.

It has since expanded into a hospitality brand called Drake Hotel Properties that owns multiple hotels and restaurants throughout Toronto and Ontario. Recently, the Drake Commissary, the Drake’s massive restaurant and prep kitchen, closed to the public.

Last summer, Stober retired as CEO amid accusations of anti-Black racism at the company by current and former employees. A few months ago, Shaileen Shah, the former director of operations for Tribe Hotel in Nairobi, was named as the new general manager.

The Drake Hotel’s new expansion closely follows the reopening of its competitor the Gladstone Hotel, which has just reopened under the new name Gladstone House.

More info and renderings of the Drake’s new Modern Wing on their website.