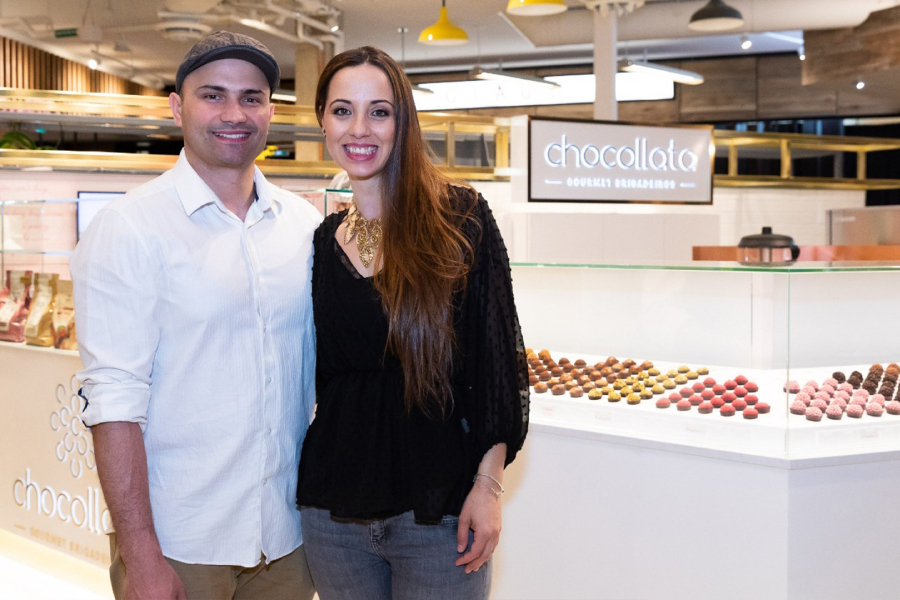 In the beginning, creating bite-sized brigadeiros was a way for Igor and Talitha Ramade to connect with their heritage and share their culture with others. Back in Brazil, the traditional dessert is passed around at weddings, birthdays and every other type of celebration – it’s not a party if there’s no brigadeiro.

“We started making brigadeiros by ourselves at home on Sundays while we watched Netflix. But there was one day where we had extras, so my wife took them into her work. That’s when things started to change for us,” says Igor, co-owner of Chocollata. The gourmet Brazilian truffle shop, now with two locations in Ontario, is popular among folks with a sweet tooth.

Igor’s wife, Talitha, came to Canada from Brazil when she was three years old and was taught the intricate art of making authentic brigadeiro by her mother.

“I’ve always had a passion for making brigadeiros, ever since I was old enough to work the stove,” says Talitha. “My colleagues started asking me to make brigadeiros for their weddings and other events, so it got to the point where we were making it two to three times a week. The feelings you get from watching people try brigadeiro for the first time are priceless.”

After realizing there could be demand for the Brazilian dessert in Ontario, the couple decided to sign up for the Trinity Bellwoods Flea Market, with 300 mouth-watering brigadeiros in tow. Market-goers snatched up all but two of the sweet treats by the time it ended.

For the two years that followed, the couple spent their weeknights making brigadeiros at a commercial kitchen and weekends at local farmers’ markets. Chocollata was sharing Brazilian culture and tradition with the people of Toronto, one bite at a time.

In 2017, the couple welcomed their second child, Theo. Although they didn’t know it at the time, their son would soon change their outlook on life and inspire new goals for their small business.

“Our son was born with Down syndrome. We found out two weeks after I gave birth, which was a bit of a surprise for us,” says Talitha. “We had to dissect a lot of information and we took the time to learn about the Down syndrome community in Toronto, in Canada, and even around the world. We quickly realized that there weren’t a lot of job opportunities for people with Down syndrome so we thought, ‘what are we going to do if something happens to us?’”

Seven months after their son was born, Igor and Talitha signed a rental agreement for a small space in the Upper Beaches, which would become Toronto’s first-ever brigadeiro shop.

“Once we signed the lease, I left my job and committed to operating the Chocollata storefront. We decided that we would prioritize hiring people with Down syndrome, giving them the opportunity to make money and gain confidence by working,” says Igor.

The pair hopes that when their son is older, he too will share the passion for making brigadeiros and will eventually take the business over from his parents.

In addition to providing inclusive work opportunities, the company regularly donates to the Down syndrome community. For every purchase of Chocollata’s Box of 6 Brigadeiros, a percentage of the sale is donated to a Down syndrome association in Ontario. It’s an ever-so-tasty way for customers to support a meaningful cause that’s close to the gourmet chocolate shop’s heart.

Chocollata’s delectable brigadeiros are made with high-quality Belgian and French chocolate and are delicately rolled in roasted nuts, sprinkles and milk pearls, to name a few. For those who haven’t tried brigadeiros, Igor describes them as a cross between a truffle, caramel and fudge.

Because Chocollata has become such a popular destination for party treats, wedding favours and hostess gifts, Igor and Talitha were able to open a second store in April 2019. Now, chocolate enthusiasts can purchase a single brigadeiro for a snack mid-shop or boxes to take home at its location in Mississauga’s Square One Shopping Centre.

“We’re so proud that we get to share our love for brigadeiros and that we can advocate for people within the Down syndrome community,” says Talitha. “One day, I hope to walk into the shop and see an entire team of people with Down syndrome who feel included while they learn, have fun and provide for themselves.”

To learn more about Chocollata and to browse its products, click here.