NOW MagazineLifeCannabisHow to elevate the flavour of your edibles 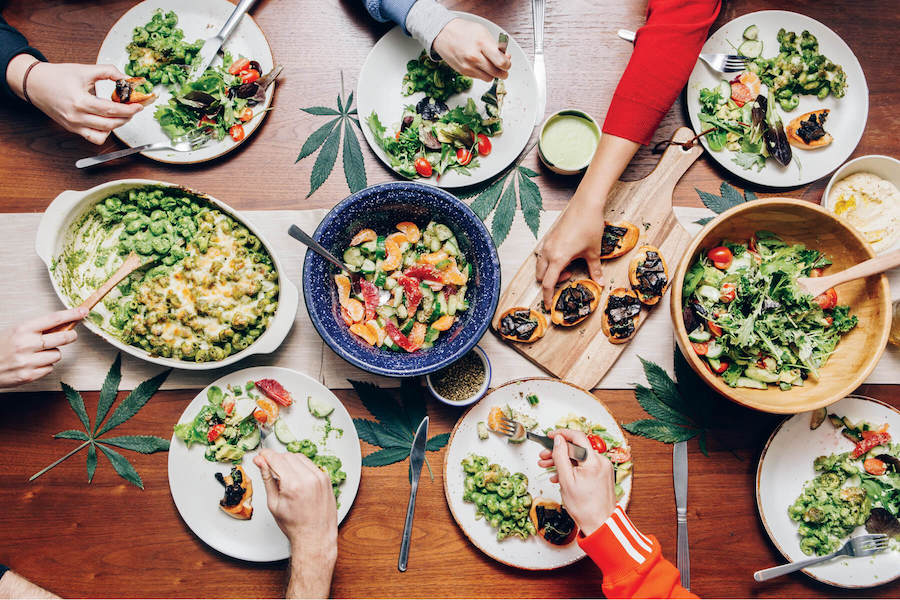 Most people will stomach an ill-tasting candy edible because the end goal is to get high rather than to enjoy the flavour. But, what about a fully-infused meal?

Cooking with weed can be difficult to perfect. But once you master the art of homemade butters and oils, making edibles is pretty straight forward. Once you add in the type of fat a recipe calls for – coconut oil, sunflower oil or clarified butter – the cooking method is the same as making non-infused dishes.

And yet, the acrid, green-y taste of cannabis is pretty potent and hard to ignore. A few ways to offset that flavour are seasoning with a heavy hand, adding extra spices and herbs to balance out the cannabis taste or infusing things that require cooking – like adding weed butter to the cake batter rather than to the buttercream icing.

But, for home cooks and foodies looking to elevate the flavour profiles of their edibles, the magic is in the terpenes.

Anyone with a casual knowledge of weed has heard of terpenes but they’re especially important when choosing strains to cook with. Just as you might choose rosemary over cilantro if you’re roasting potatoes, you might choose a strain with the earthy terpene pinene over the more fruity and floral nerolidol.

The magic of terpenes in edibles

So, what are terpenes? Essentially, they’re fragrant oils found in many different kinds of plants. They’re present in flowers, fruits, herbs and of course different strains of cannabis.

Thinking about marijuana beyond its psychoactive properties, chefs started choosing strains to cook with based on their dominant terpenes. Sour Diesel, a sativa-dominant strain, contains humulene, limonene and ocimene among other terpenes.

The scientific names make flavour matching a bit more difficult than blending the herbs on your kitchen spice rack, but taking the time to figure out the flavour and aromatic properties present in different strains is worth it. If you break down Sour Diesel’s terpenes, you get a combination of lemony, earthy, spicy, sweet and herbal aromas, making it easier to decide what kind of recipe it is best suited for. I’d recommend a flame-grilled sea bass or a fresh salsa with infused oil.

If you don’t care about taste, you can really use any strain you want when making infusions.

For people who care about their infused-food tasting good, think of selecting terpenes like choosing the right wine or beer to go with your meal. You could drink an ice-cold pilsner with lamb ragu, but a Chianti from Tuscany would complement the meat sauce so much better.

Professional chefs, like Los Angeles-based Andrea Drummer and Chris Yang, have taken pairing to the next level. They make gourmet, gastronomical creations infused with weed oils and distillates. At Yang’s pop-up dinners, he serves dishes like kimchi devilled eggs, mushroom miso cream soup and steak brochettes with mango salad. Definitely a step up from pot brownies.

Home cooks usually don’t have access to pure cannabis concentrates that mask the flavour of marijuana while still getting you high, and that’s another reason terpene matching comes in handy. Imagine yourself as a Michelin star chef blending tasting notes together and go wild experimenting.

When making edibles for the first time most people bake. Cookies, brownies and cakes are a common first foray into weed cooking and a lot of people stop there.

The thing is, most strains have very herbaceous flavour profiles, making savoury dishes much better suited for infusions than desserts. Savoury foods can go head-to-head with the dominant terpene aromas and flavours, while sweet, baked goods can get overpowered.

Terpenes that exist in basil, rosemary, oregano, cloves, cinnamon and ginger all exist in a range of strains, from OG Kush to White Widow.

Toronto home cook-turned-entrepreneur Vanessa Davis has mastered savoury infusions. She started making edibles for herself and posting them to her Instagram and people wanted to start buying them. Through her online edibles business Baking While Baking, she sells a range of desserts, dishes and sauces.

“When I was first starting out [making infusions], for a month or two everything I ate was infused, like infused stir fries, burgers from scratch, even my breakfast would be infused because once you have the oil or butter it’s just a matter of swapping it in and out. You can make literally anything infused.”

She’s a big fan of experimentation and some of her most innovative ideas come to her when she has the munchies, like the jerk sauce. “I just like to make things I can make from my culture, that I enjoy eating and that people would probably have never thought of making infused.”

Inspired by Davis’ experimentation, I started dreaming up recipes beyond the obvious. Now, I’m excited to try out a veggie Thai green curry infused with Skywalker OG, an indica-dominant strain with nerolidol, which is found in lemongrass and jasmine flowers. An olive oil cake, typically a very rich, boozy and citrusy dessert, infused with Lavender Jones, a sativa strain with linalool. A slow-cooked chili with OG Kush because the earthy borneol terpenes will be offset by the spicy savouriness. I also want to add Durban Poison to a from-scratch tomato sauce or Bubba Kush to a butternut squash soup.

At the end of the day, we’re all eating edibles to get high or to reap the medicinal benefits, but that doesn’t have to be at the expense of our taste buds.

For more, listen to a podcast interview with NOW’s Kelsey Adams and Baking While Baking owner/operator Vanessa Davis about new developments in edibles.