It’s no secret that Toronto is home to more bad Thai restaurants than any other city on the planet.

There must be hundreds! I should know – I’ve had the misfortune to eat at many of them. Buddha’s my witness to the number of ineptly prepared ketchup-pink noodles I’ve seen. Yet still I persevere in hopes of stumbling across the exception.

Today, that culinary quest brings me to an unassuming storefront in one of the less genteel areas of Cabbagetown. Here, I encounter modest Sukhothai, Nuit and Jeffrey Regular’s year-old Thai trat. The buzz says they serve some of the best Thai food in town. The buzz be right.

See the unmistakable expertise in the house’s signature pad thai ($10.39), a tremendously textured tangle of thick rice-stick, skinny vermicelli and crunchy napa cabbage. Tossed with five large butterflied shrimp, a modicum of scrambled egg and a wallop of tamarind-based chili oil, it’s an exercise in restraint, no reddish, sugary mess festooned with carrots cleverly sculpted into the shape of chrysanthemums.

Closed five days a week for the last few months so that chef Nuit could finish her nursing degree, the 12-seater now operates Monday through Saturday. The Regulars have also used the time off to streamline the menu. It currently includes five different curries that range in firepower from minor brushfire (mild Gaeng Panang with waxy potato) to full-on inferno (hellishly hot Gaeng Phed with squash, all $7.49 with chicken, beef or tofu, with short-grain jasmine rice). Course that all depends on how much of the house hot sauce you shovel on. 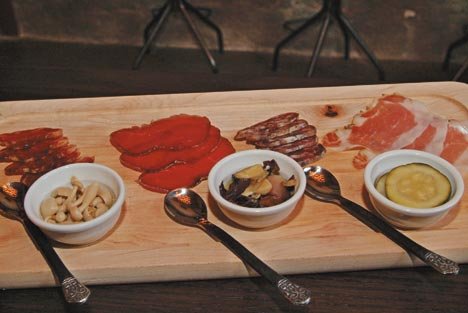 Soups are just as explosive. Tom Kha Gai ($7.99) in coconut milk erupts with succulent chicken, lemongrass stalk and red bell peppers I mistake for maraschino cherries, so sweet their taste.

Kway Tiaw Sukhothai ($7.49) could be described as Thai-twisted pho, a glorious riot of wide rice noodles and tender sliced beef in an aggressively spiced aromatic broth thick with coriander, five spice and garlic.

Lovers of the stinky rose will also appreciate garlic chicken nuggets ($7.25/with tofu $6.75), pale garlicky Thai fried rice ($7.99 with chicken, beef or tofu) and garlic-breaded basa catfish (Pla Taud, $8.35 with rice). If that’s not enough of the odorous bulb, even the rainbow-coloured salad of ripe mango, carrot ‘n’ cucumber that sides the fish ($4.49 à la carte) gets doused with a spicy minced raw garlic vinaigrette.

Not everything’s as skilfully executed. Deep-fried rice-paper-wrapped spring rolls ($3.49 for three) stuffed with cellophane noodles and Chinese ‘shrooms are strictly par for the course, and most mains are little more than meat and sauce – a fabulously complex sauce, mind – a situation remedied back at the Test Kitchen by the quick addition of some wilted Swiss chard. But all is forgiven for the sake of Sukhothai’s nutty cassava cupcakes ($1.99).

Yes, the neighbourhood’s colourful at best, and the decor – what there is of it – has been done on a shoestring, and a very thin one at that. And despite the fast food set-up, the grub is often a long time coming. The Regulars’ regulars know to order ahead and show up later.

Those who find this sort of thing frightfully déclassé can always send the chauffeur.