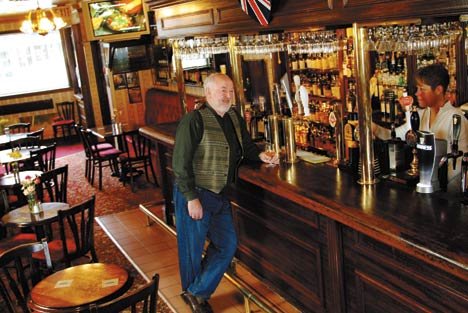 Forget your irony, forget your West West Queen West, forget your big glasses. If you want a real local, open day and night, you need real people, and we’re out in the east end.

Feathers (962 Kingston Road) is the closest thing to an actual English pub you’ll get outside of England: lots of upholstery, dart throwing and people just hanging around having a pint and a laugh. That’s what we call an entertainment district.

More salt-of-the-earth socializing can be found at the Only Café (972 Danforth), where anti-establishment types who may occasionally cut their own hair prop up the busy bar. These half-in-the-bag, disenchanted NDP supporters lament the demise of Ossington as a good place to get your car fixed.

For true grit, how about the intersection of Parliament and Gerrard? Just north is the House on Parliament (546 Parliament). Granted, most of the patrons come from the right side of the Cabbagetown streetcar tracks, but who can have attitude when you’re this close to a No Frills?

Hard by Yonge, the gracefully well-worn Imperial Pub (54 Dundas East) is definitely in an eastern state of mind: no themes, no postmodern taxidermy, no purposely mismatched chairs – take it or friggin’ leave it.

Since many of us east-enders have lived in basement apartments, we feel right at home at the subterranean C’est What (67 Front East), with its all-VQA wine list and vast selection of local draft taps, which makes sense because here in the east end, being local at your local is what it’s all about. 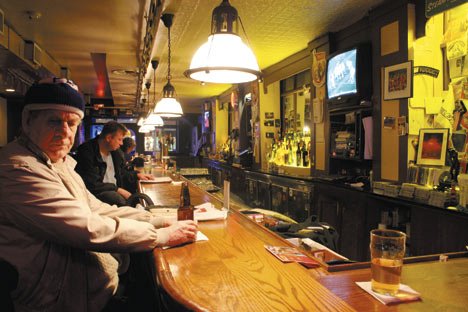 Welcoming in daylight or dark, a great local should, above all else, reflect its clientele. That’s why west end pubs and bars are better. We’re cooler, smarter and more fun. West versus East? Seriously, that’s like frites versus McCain oven fries.

The Rebel House (1068 Yonge) is a Toronto fence-sitter, but we’ll claim it as ours because we don’t think east-enders would grasp the subtlety of the whole urban Upper Canada thing the Rebel’s got going on.

It’s that same sophistication that allows Jane Jacobs Annexers and U of T fraternizers to coexist elbow to elbow on the vast patios of the Madison Avenue Pub (14 Madison). When worlds collide and nobody gets hurt, you know you’re on the west side of town.

Just south of those genteel environs, in the urban mélange of Spadina and Chinatown, is Grossman’s Tavern (379 Spadina), one of the few remnants of this district’s Jewish history. And that’s what we westerners love: change, growth, evolution.

Even though there’s very little Italy left in Little Italy, you can still get all Scorsese at the Monarch Tavern (12 Clinton). Be sure to up the authenticity factor by bringing in a sandwich or a slice from one of the local takeouts. Hey, c’mon! Where you gonna get a veal sandwich, pinball and a beer in East York?