Downtown Toronto has felt gutted in the past couple months, with stay-at-home orders hollowing out the city’s office towers during the coronavirus pandemic. Walking through the streets, there’s a nervous calm and deceptive peacefulness. The feeling is a reminder that things are not well.

What if it stays this way?

“This is now the largest work-from-home experiment that has ever taken place,” says Royal LePage commercial realtor Ryan Henry. “And some companies are finding it’s working better than they thought it would.”

Banks and tech companies have rolled out infrastructure to allow the bulk of employees to work at home, from internal software to video conferencing apps like Zoom. If physical distancing continues, will big employers consider leasing out or abandoning their pricey office spaces, typically their biggest expense after wages?

Jack Dorsey, the CEO of Twitter and merchant service Square, is making his work-from-home policy permanent even after the COVID-19 pandemic subsides. Google and Facebook will keep some employees work remotely until at least 2021.

“Office centricity is over,” declared Shopify CEO Tobi Lütke on Twitter. On May 21, he announced the Toronto tech company will keep offices closed until 2021 and prepare most employees to work from home permanently.

Canadian banks are also getting comfortable with work-from-home culture. BMO and TD Bank are entertaining blended or permanent remote options, rotating a small portion of staff into their office spaces if need be.

“The experience over the last several weeks, including having over two-thirds of our team members successfully working from home, has allowed us to learn and test assumptions about where work can be performed,” Tervit wrote in an email. “That gives us an opportunity to revisit remote work arrangements into our future workplace design.”

If major employers decide to vacate office spaces when leases expire, what does that mean for the commercial real estate developers with all those cranes in the sky? If CIBC is entertaining remote work arrangements, how does that affect CIBC Square, the twin towers being built as replacement headquarters at Bay and Front by Ivanhoé Cambridge and Hines?

Commercial real estate agents and urban planners say it’s still too early to definitively say whether major employers will abandon downtown as the pandemic drags on. Big tech companies have started moving from the suburbs to the core to take advantage of young talent, while at the same time office towers are being converted into storage and execs are eyeing cushy work set-ups in cottage country.

One thing is certain: physical office spaces will need to be rethought and redesigned, affecting how and when we work in the presence of others.

Cadillac Fairview – the company that not only owns major downtown retail and office spaces like the Eaton Centre, TD Centre and RBC Centre  – declined an interview request. Instead, the company offered an action plan to safely accommodate tenants if and when they return to offices.

“We remain in regular communication with our clients to understand their plans and to ensure integration with CF plans,” reads the statement. 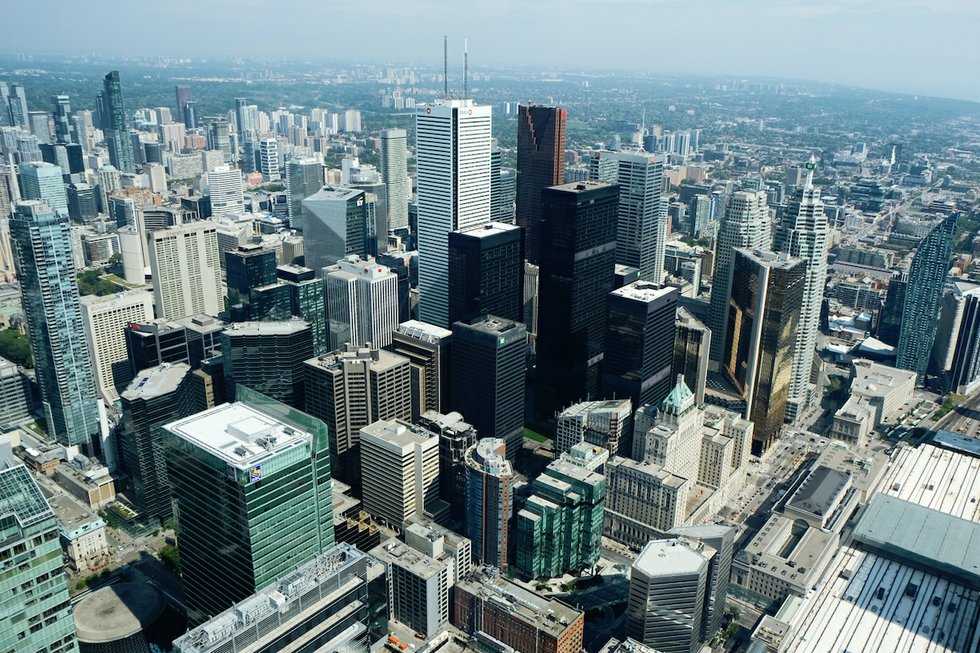 “Offices will suffer,” says Al Behrouzan, a commercial broker at Re/Max and founder and CEO behind Bosseini Development. “Even before corona, I saw it as a dead industry.”

Behrouzan has clients investing in commercial real estate spaces internationally. Watching global shifts in wealth and trends, Behrouzan expects a movement away from retail and office spaces. He doesn’t see an economic crash in all of this, but a transfer of power. Some billionaires will go bankrupt while new billionaires emerge.

Behrouzan sees a physical shift, a decentralization away from downtown, with more people moving an hour or so out of the city, purchasing lake houses to comfortably work from home while earning $250K from companies like Google or Amazon. He’s developing residential neighbourhoods in places like Orillia for that reason.

He also sees retail spaces being replaced by storage spaces for Amazon.

“Amazon is paying better [rent] than an actual office space,” says Behrouzan, who predicts this trend will affect mixed-use condo developments too. “They want storage even in high-end areas. You’re going to see five, six storeys of storage, and on top of that condominiums. No more retail and offices.”

Ryan Henry sees things moving in the opposite direction. He represents tenants and landlords in commercial spaces, including offices in the downtown core.

“A lot of companies have been leaving the suburbs and coming downtown because of the young talent pool,” says Henry, adding that before COVID-19, Toronto had the lowest commercial vacancy rate in North America at 2.2 per cent. He points to Google, which is leasing 400,000 square feet of office space on King Street. Apple moved offices from Markham to a Bremner Boulevard tower that also houses Amazon. Meanwhile, Microsoft, currently located in Mississauga, is planning to move into CIBC Square.

“Rates have steadily gone up,” says Henry, listing off figures that suggest ceaseless demand for downtown office real estate. “The net rate at some A-class office buildings have increased as much as 17 per cent. There’s over 10 million square feet of office space being built in the core right now. That’s being pushed by a lot of the tech companies that have been migrating here. We have more cranes in the sky than any other city.”

But these figures are all pre-pandemic and do not account for how work-from-home conditions will impact the city.

Henry adds that some companies are seeking out rent abatement or forgiveness, trying to simply sustain themselves during the pandemic. Others are adjusting to the new normal by putting up portions of their office space on the sublease market. Henry points out that companies still keeping even a fraction of their staff onsite will require extra space should social-distancing practices continue.

“It might not be this intimate, collaborative environment where everyone is sitting so close to each other,” he says. “It may be more spread out where they still need the space that they had instead of reducing their office space.” 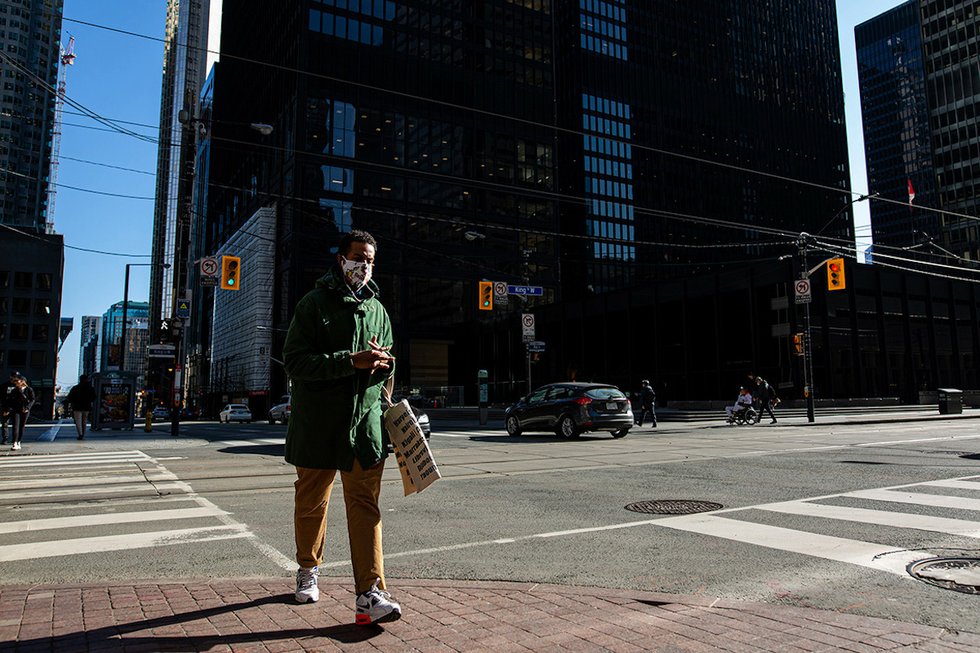 Joe Berridge, an urban planner and city builder with Urban Strategies Inc. agrees with Henry. With a COVID-19 vaccine months – if not years away – he suggests offices may be reconfigured instead of abandoned as physical distancing becomes the norm.

“We’ve all gone to open-plan,” says Berridge, adding that over the last couple of decades, cubicles gave way to communal spaces and “hot desking” – when employees rotate work stations.

“Twenty years ago a typical organization calculated that they have 200-225 square feet per person. When you were leasing office space that was the kind of multiple they would use,” he explains. “If you go to the more modern office layouts, they’re down to about 75 [square feet per person]… If we have to radically increase the square feet per person, that will be a bit of a reversal of something that’s been going in the opposite direction.”

Berridge doesn’t know what kind of change COVID-19 will mean for the urban landscape, and whether that change will amount to an “inflection” on our routines or a radical adjustment to the way we live and work. He leans towards inflections – offices will need to be reconsidered to accommodate physical distancing and work schedules will be adjusted so people don’t need to use elevators at the same time, for example.

He compares this adjustment to post-9/11, when New York City and London introduced permanent security measures rather than abandon skyscrapers. I counter that 9/11 happened at a time when the internet and technology wasn’t at the point where working from home was a viable alternative.

Berridge – who wrote Perfect City, a book exploring how urban centres across the world function – responds that for COVID-19 to radically alter the cityscape, it has to work against history and human behaviour in ways that wars and changes in industry have not.

There other are reasons cities stubbornly continue to exist that goes beyond practical considerations.

Berridge lived in Exeter as a child, a city in southwestern England that was bombed flat during the Second World War.

“I can remember walking through the rubble piles with my mom,” he says. About a decade later, the city was put back together again.

“The city is not there because of its physical character,” he continues. “The city is there because of all the economic and social interactions and its competitive advantage or disadvantage. These are the deep forces of a city and they’re pretty indestructible objects.”

Cities continue to congregate around waterfronts, even in though in Ontario supplies aren’t arriving via the St. Lawrence River. Berridge explains cities were designed to accommodate manufacturing a century ago and even though we have shifted to an information economy, the layout persists.

“Do I think that COVID-19 is stronger than the move from the manufacturing economy to the information economy?” he asks. “Cities are like a coral reef. They grow and change and they respond. Only one per cent of the physical area of a city, if that, changes every year. This great crustacean reef magma of the city keeps on rolling. It takes an awful lot to stop and change it.”

Ultimately, he suspects everyone will continue to flock downtown, office spaces will continue to thrive and working from home will not become the new norm even if it’s more efficient to write up grocery list or mind the kids while muted on conference call.

“For a huge number of people, work is a social experience – and a very satisfying one,” says Berridge.

The centuries-old ritual of getting up in the morning, going to work, grabbing lunch and coming home might be stronger than whatever conveniences working from home offers. That in itself will be an underlying motivation for city dwellers to continue the way they have for centuries. 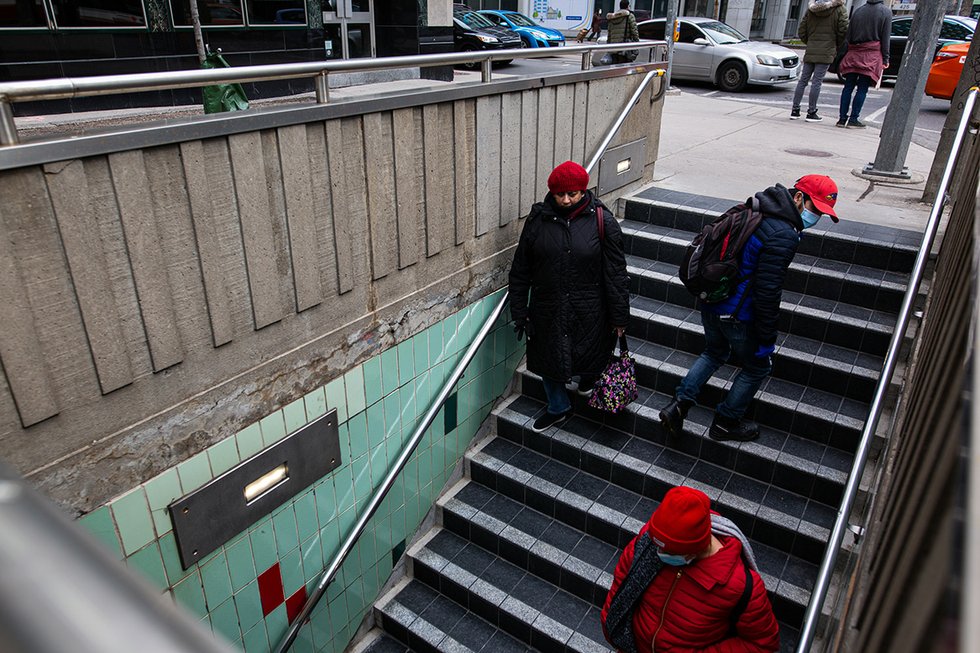 TTC commuters try to keep a distance at Osgoode Station.

“The thing that I’m most worried about, and I don’t know the answer to, is what people are going to do about riding transit. Well over half the people working in downtown Toronto get there by transit. When you go to Manhattan you’re up to 85 or 90 per cent. How the hell are these people going to work?”

If physical distancing remains our reality, and people must avoid packing uncomfortably close together into subways and streetcars, Berridge fears that the transit system will collapse.

Transit ridership had flattened and was already beginning to decline in many cities, including Toronto, New York and London. A five per cent drop in ridership would be the nail in the coffin, since most transit operating budgets were already stretched thin before COVID-19. The city simply cannot accommodate all those commuters by car.

The TTC is losing millions in revenue due to COVID-19. On Friday, Mayor John Tory laid out a doomsday scenario in which the TTC’s budget will be slashed by $575 million – effectively cutting service by half – if the province and federal government doesn’t step in with financial aid.­­­

The city declined our request to interview chief planner Gregg Lintern. Instead, a spokesperson provided the following statement when asked whether downtown will have to downsize.

“The City of Toronto is actively addressing those questions. Toronto’s Office of Recovery and Rebuild is working closely with institutions, communities and partners to successfully restore social and economic infrastructures, while ensuring the city remains healthy,” the statement reads. “We will be sharing more information on recovery and rebuild as this work progresses.”