A how-to for winter cyclists 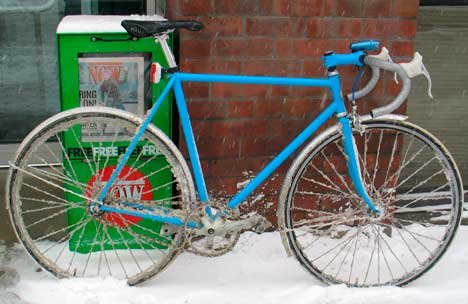 Cycling in the city through the snowy months can be a little like poor-man’s skiing.

So consider some of the benefits of setting up a winter ride. With some simple adjustments, you can own the snowy road, save some cash and deal with holiday gut without the gym membership.

Just ditch style in the winter. That Pashley doesn’t deserve to get eaten by salt, covered in grime and penetrated by water for four months. Instead, find a beater. Something with wider knobby tires works. Gears are nice, but can freeze. Make sure to lube brakes, gear cables and your chain. A lot.

Freezing is also made a whole lot worse if your beater is going indoors between rides. Any ice buildup melts and then refreezes when you go back outside. Keep it outside – that’s why you’ve got a beater.

There are studded tires out there, if you’re convinced you need them, but again, Toronto roads are pretty well cleared most of the time, and you’ll just be buzzing along most of the time.

Starting slowly is key. When your body isn’t warmed up the frigid temps are taking a toll on your joints. Warm them up just like you would a cold car engine – i.e.: don’t floor it.

Once you’re moving keep yourself in a straight line, especially over ice and snow. Also avoid the front brake over slippery roads. Using it increases the chance of the front wheel sliding out.

It’s a good rule-of-thumb to avoid streetcar tracks at any time of the year, but wet, slippery rails are so much worse in the winter. The same applies to metal bridges, plates and even painted lines.

Most of the time, you won’t even encounter crazy conditions – just former crazy conditions in the form of encroaching snowbanks that push you closer to traffic. The city’s supposed to be on top of this, but that statement applies to lots of reality defying issues.

Like any active sport, layering is key. You’re going to heat up in the core, and conditions can change, so base layer, mid and shell, is the standard. The shell should be waterproof, and again – style will suffer, unless you’re still into that mid-90s urban explorer dad look.

Footwear has to be waterproof. I found some winter hikers for $70 last year, and they’re amazing. They also negate the need for those cycling dog booties.

Pants are another story. Jeans don’t really work – but you can usually swing it with a good pair of thermals underneath. For those not-so-cold moments, you can try windproof underwear. They counter the crucial groin chill.

As for your hands and head, they’re at the top of the list. Your hands are fixed in place, so you can’t just heat them up as your ride. Ski gloves (not mitts) do the job. The head is tougher.

Balaclavas are great, but you can get by with a good thin toque under your helmet. It sure beats squeezing into a hood, which flies off, impairs vision and tends to channel air into your jacket. Some people do the ski goggles, too.

So that’s a brief round-up. If you’re pondering the move to winter cycling, the city has a comprehensive breakdown for those adapting to winter riding. They’re even hosting a coldest day of the year ride, January 30, to bring together winter riders.

Remember, even if you only ride to your destination, half of Toronto’s bus routes have racks, so check to see if you have an easy blizzard bail out plan.[rssbreak]