BYUtv has a come to Jesus moment on LGBTQ characters 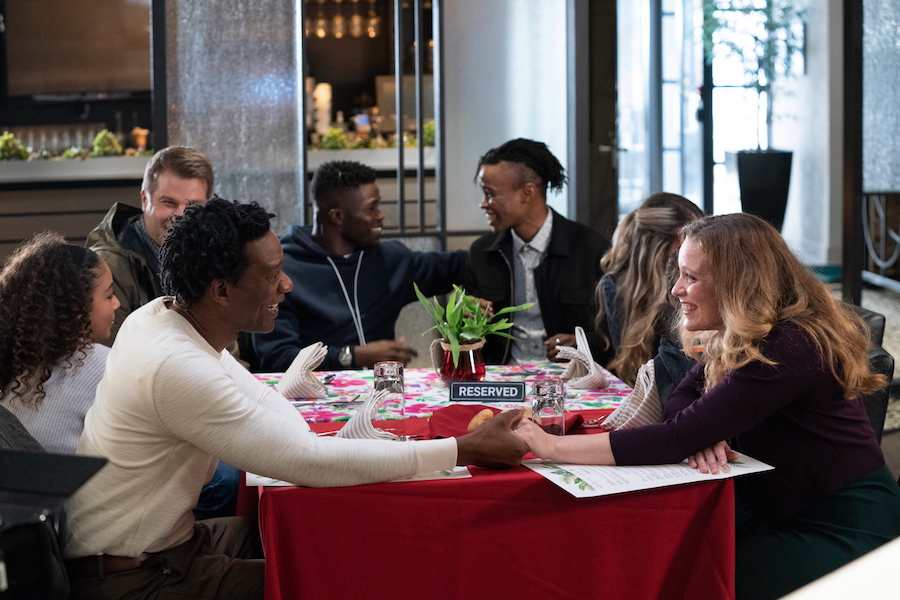 A scene from The Parker Andersons, which is produced by Marblemedia and BYUtv.

BYUtv will start including LGBTQ characters on its TV shows after Canadian writers and producers voiced concerns over exclusionary “unwritten” rules on the Mormon church-affiliated broadcaster’s productions.

“Our upcoming series Overlord And The Underwoods will have LGBTQ characters,” BYUtv’s Canadian producing partner Marblemedia said in an email to NOW on April 8. “We have been having conversations with BYUtv about LGBTQ representation in future seasons of The Parker Andersons/Amelia Parker.”

Showrunner Anthony Q. Farrell and members from his writing team from made-in-Canada shows The Parker Andersons and Amelia Parker told NOW they could not include clearly identified queer characters in the shows since BYUtv is owned by U.S.-based college Brigham Young University, the flagship educational institution of the Church of Jesus Christ of Latter-day Saints (LDS), aka the Mormon church.

“BYU has told me for the shows that I’m working on with them, which right now is just Overlord And The Underwoods, we can open the doors up to queer representation,” said Farrell said in a follow-up interview. He also says that the LGBTQ characters in the sitcom about an intergalactic villain seeking witness protection on earth will be clearly identified, not simply coded as queer for deniability’s sake. “That’s huge for a broadcaster like BYUtv to say and that’s only because of your article.”

In a NOW story published earlier this week, he and his all-BIPOC creative team discussed the progress they made in terms of racial representation on The Parker Andersons and Amelia Parker, two interconnected sitcoms about an interracial blended family. But they also had to square their achievement with BYUtv’s affiliations with LDS and unofficial restrictions on LGBTQ characters.

Farrell said there was no written policy on set, but it was spoken.

“It’s one of those things where they couch it in a way where they say, ‘We’re not ready for it,'”said Farrell. “They know that they have to progress at some point, but they’re worried that their audience is not ready to go there. That to me is still saying you can’t do it.”

BYUtv provided NOW with the following statement: “As a young network committed to bringing together religious and non-religious audiences, BYUtv is learning and exploring ways to partner with diverse content creators, writers and talent to implement meaningful co-viewing experiences for our target audience (children 8-15 and their parents). While BYUtv has not referenced LGBTQ+ topics and characters in the five original scripted series it has aired to date, we desire to address subjects – including LGBTQ+ – that are important to our growing and diverse audience.

“There are no policies that would exclude the network from including characters who identify as LGBTQ+, and BYUtv is exploring ways to do so,” a network rep added.

Following Farrell and his team’s initial interview with NOW, producers from the LGBTQ community questioned why networks like CBC, which will air Overlord And The Underworlds, would work with a producer that discourages LGBTQ characters on TV.

Both producers are concerned current anti-discrimination policies at the CBC and Canadian Media Fund (CMF) are ineffective against broadcasters that have “unwritten” exclusionary rules.

“I feel very disappointed by the situation,” Larocque said, adding that he wanted to celebrate The Parker Andersons/Amelia Parker, which saw underrepresented BIPOC writers making positive changes around racial representation. “When you then hear that there are policies that are informing the production of that show that are also exclusive and exclusionary, and that are leaving queer people out of it, it’s incredibly infuriating. You just want people to get it right. If it’s not for all of us, it’s for none of us.”

CBC’s head of public affairs Chuck Thompson told NOW that the possibility that BYUtv engaged in exclusionary practices had just come to the network’s attention.

“In light of what has surfaced, our programming team has told the producers at Marblemedia that for CBC to stay on as a partner, we need to be assured BYUtv’s values regarding diversity and inclusion are aligned with ours,” Thompson said.

“If it wasn’t for [the article] they’d still be saying our audience isn’t ready,” said Farrell. “Now they’re in a place where they have to make some changes to be able to work in this country.”

NOW spoke to JP Larocque and Michael MacLennan before the news that Overlord And The Underwoods would feature LGBTQ characters. Larocque, a proudly BIPOC and queer creator, said the issues he raised were not meant to create conflict between BIPOC and LGBTQ2IA. Contentious debates could easily devolve into pitting marginalized groups against each other, he added.

“That’s what makes this so tricky to talk about,” said MacLennan. “This is a phenomenal opportunity for underrepresented communities to get credits, to make some money and to be seen as viable alternatives within the industry. Not to quantify the original article so simply, but it’s like 95 per cent of this is a good news story… But then within that story is something that is important to acknowledge.”

And the issue isn’t limited to BYUtv.

Other broadcasters like Hallmark Channel have been producing very white, very straight movies in Canada that are consistent with an ideological drive. Hallmark only made the gay holiday movie Christmas House after a backlash erupted when the cable network pulled a wedding commercial featuring a lesbian couple. According to MacLennan and other writers in the TV industry, there could be more networks like Hallmark and BYUtv with unwritten rules operating in Canada. They may not openly discriminate, but scripts with content audiences might find polarizing won’t progress.

Larocque said investing tax dollars into TV programming backed by BYU could lead to real and negative impacts on the queer community. “That organization can use that [money] to lobby or fight to have laws repealed.”

Larocque is on the Writers Guild of Canada’s diversity and inclusion committee alongside Farrell. They both attended an emergency April 9 meeting that was called following the NOW story. In a business environment full of people fearful of losing work, they and other organizations in Canada have to figure what meaningful steps they can take to keep BIPOC and queer talent and their allies informed and protected when dealing with broadcasters that may have unwritten policies.

“Who a creative chooses to collaborate with, and the stories they choose to tell, is a personal choice,” said Warren P. Sonoda, the National President of the Directors Guild of Canada, in an email to NOW. He directed episodes of The Parker Andersons and Amelia Parker but added he did not know the extent of exclusion at BYUtv. Sonoda said he would decline future work with BYUtv if exclusion continues.

“I also recognize I have the financial privilege and I’m at a point in my career where I can turn down work that does not align with my values. This hasn’t always been the case, and my statement is not meant to undermine those who can’t make the same decisions, or those who don’t have those choices to begin with. I’ve been there, too,” Sonoda added.

“It’s encouraging to see recent statements from BYUtv suggest that change is coming, but much more needs to be done. Responsibility for inclusion on their part should be done sincerely and willingly – real change is more effective that way.”

In the statement provided to NOW, Toronto-based Marblemedia said it has faith in BYUtv’s progress.

“Marblemedia has and will always remain true to our commitment for inclusivity in all projects we develop. We collaborate with a number of international and domestic broadcasters and have a very diverse slate of projects, past and forthcoming, including LGBTQ projects (family and primetime) and projects that shine a spotlight on a wide range of social justice and representational topics. It is our aim to create the world we want to see through the projects we produce. We care very much for our LGBTQ colleagues and about representation.

“In season one of The Parker Andersons/Amelia Parker, the focus was on getting racial representation right and we had many open, challenging conversations about how to create a story about racial profiling and microaggressions that worked with the network’s needs,” the statement continued. “The episode that emerged out of those discussions is one that we are all very proud of. We are confident we will get there with LGBTQ representation as well in this series. Progress is made one step at a time.”

NOW asked BYUtv for its stance on same-sex relationships and marriage. The broadcaster did not respond.