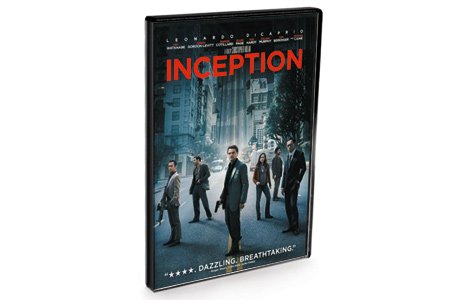 Inception is a caper flick about a gang of professional thieves hired to get past the target’s security, crack a vault and plant, not steal, a document.

The gimmick is that it all happens in dreams. Using near-future technology, the gang members design dreams, hook up to sleeping subjects, feed them the dream and interact with them in it. This allows for bending buildings, a runaway train, a paradoxical staircase, extended floating sequences and other irrational marvels that add big visual fun to the usual explosions and running with guns.

Despite Leonardo DiCaprio’s efforts to involve us in his character’s mission-endangering guilty secret and tortured yearning for his children, this isn’t an actor’s piece. Tom Hardy, as ace forger Eames, hits it just right with dry, throwaway wit.

More detail would have been welcome in the too-brief making-of docs that focus on the effects.