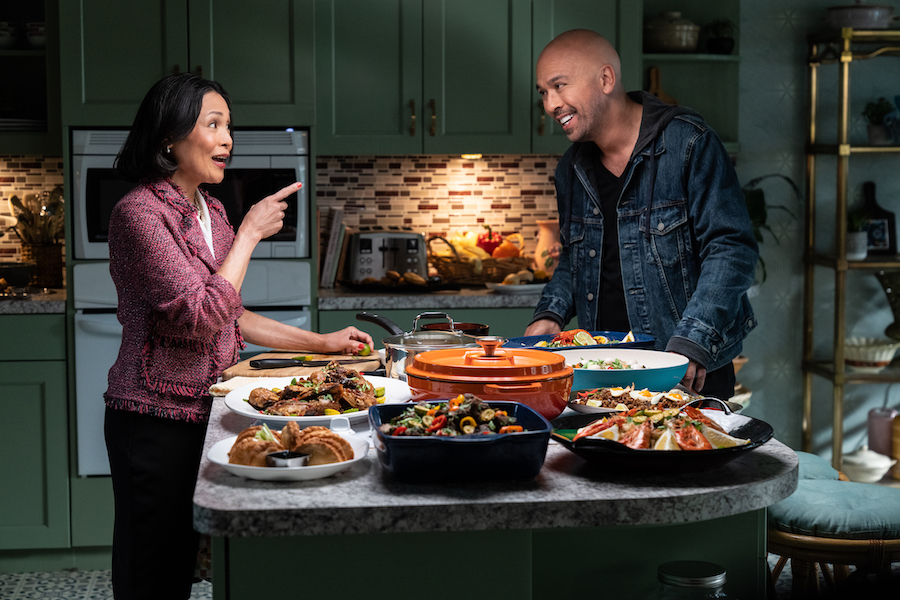 2022 is the year of the Asian tiger mom. First there was Sandra Oh voicing an overbearing Toronto mother in Domee Shi’s Turning Red. Then there was Michelle Yeoh as the tender ass-kicking matriarch in Everything Everywhere All At Once. And now we have Lydia Gaston’s disapproving mom to Jo Koy in Easter Sunday.

Koy’s amusingly heavy-handed mother is familiar to Netflix audiences who watched the comic’s specials Live From Seattle and Comin’ In Hot. The latter special was watched by Steven Spielberg, whose Amblin Entertainment approached Koy about making a movie. Now we have Easter Sunday, which opens in theatres Friday.

The movie expands his material about raising his Gen Z son while living with the scrutiny of Filipino families and a demanding but supportive single mother. “Just imagine how she finally feels to [hear] her voice and accent, to see her skin and food and family being represented on the biggest screen,” says Koy.

He’s speaking to NOW on a Zoom a call about the hustle to get his comedy specials on Netflix, obsessive religious behaviour within colonized communities, giving True Lies star Tia Carrere her first Filipino role and building bridges with people from other countries with gags that hone in on cultural specificities.

Watch the whole conversation in the video or read an edited and condensed version below.

In the opening section of Comin’ In Hot, you’re very specifically talking about Hawaii. I’ve never been to Hawaii. I’ve never met a Hawaiian. But somehow I just got the humour because of the way you build the joke. Even if you’re totally foreign to this, we can get it.

I love you for saying this. Let me tell you why, I want to stop you right now. Netflix wanted me to cut that joke. They wanted me to cut it because they said it was too specific to Hawaii and that people that aren’t from Hawaii are going to turn it off because the’re not going to get it. They were like, people from Omaha, Texas or Japan aren’t going to get it. And I’m like, “Wait a minute. This is Hawaii. This is the vacation capital of the world. Everyone from Texas, Omaha and Japan go to Hawaii. Either they already been there or they’re about to go there. So either you’re going to understand the references or they need to learn about the references.”

Can you believe that? This movie would have never happened.

So when they said no to me on Live From Seattle – they said, “we don’t want it” and they passed – I took out my own money and made it myself. And then two days before I was about to shoot it, Netflix calls and they’re like: “Hey, we heard you’re shooting your special. We really don’t want it.” Imagine that pressure. I got all my money invested. And the person I want to sell it to already said no. But yet I’m still shooting it. Then I cut it up. Then I bring it to them: “I know you said no, but can you just watch it? Tell me what you think.” They watch it. They buy it.

They made me jump through so many hoops, so many obstacles, just to get that story across. If I took their “no” for an answer, I wouldn’t be speaking to you right now. You know how many times that’s been said to people in Hollywood. And the person they say it to goes: “All right, well, I guess I’ll just go back to college again.” There’s a lot of people that went through that. Thank god I didn’t. I shot it, gave it to them. They bought it. That’s how I got Comin’ In Hot, which Spielberg watched. And Spielberg was like, “I get it.”

The thing in Easter Sunday that really made me think of my upbringing is the Catholicism. I feel like there’s something about colonized people where they compete to be the most Catholic.

Whoever loves Jesus more. How could I be closer to Jesus? Yup.

Whoever can do the craziest shit to show their love for Jesus.

Yes, especially Filipinos. They go really ham on that.

Well, you got people who crucify themselves in the Philippines.

On Easter! They hang themselves on crosses with nails. I saw it.

Look, my family doesn’t do anything like that. But they carry around a plastic doll of the Virgin Mary, wrapping it in blankets to treat it with care. Or they make sure when you’re on a road trip, you say a rosary when you leave the gas station and before you get to the diner for lunch. What it is about us colonized folks, why do we have to compete so hard to show people our Catholicism.

I think that comes from poverty. They’re always thinking about retirement and life after death. Do good on earth because God is watching you. When you come from a third-world country, you don’t have much. All you know about is your immediate family and where I’m going after this. “I better do good here with the little that I have because I want to make sure I’m taken care of up there.”

It’s also the same driving mentality behind: “Oh, my son is a doctor or a lawyer, and your son is not.” It’s like the same competitive energy.

Same component. And that has nothing to do with the kids. That’s still them. “It’s like I was not able to be that, but I’m going to make sure my kids are. And I know you’re not going to be able to do that with your kids, so my kids are better than yours, which makes me better than you.” Imagine the pressure that happened to me when I became a comedian. My mom was so embarrassed. She didn’t want to tell anyone I was a comedian. She would brag about my part-time job: “Oh, he’s really good at selling shoes at Footlocker.” I’m like, what the fuck? I’m a comedian. I don’t give a fuck about Footlocker, mom.

You putting Tia Carrere in this movie gave me life. Tia Carrere was special to me just being an Asian person in True Lies. That was different. But I’m thinking about how her career was limited because of the male gaze, the white gaze, the exoticization of Asians.

That’s exactly it: the racism that she had to endure during her time and her come-up, the horrible roles that were described for her to go audition for, even though she was so extremely talented. She had all the acting chops that you needed for any role. The only roles that she could go out for was “thick accent but could sing well.” I saw her hit the big screen, she looks like my cousin, that meant the world to me. I [waited] for the end credits just to see what her last name was. And when saw it was Carrere, I was like, “she’s Filipino.” That indirectly inspired me. That’s why I had to have her in this movie. It was my way of paying homage. You know what she said to me? Forty years she was in Hollywood. This is the first time she ever played a character described as her. She’s never played a Filipino in her life, or ever went out for a movie role where the character was Filipino-American.

Thank you so much for this conversation. I hope to see your show when you get here.

I’ll see you in Toronto, baby.