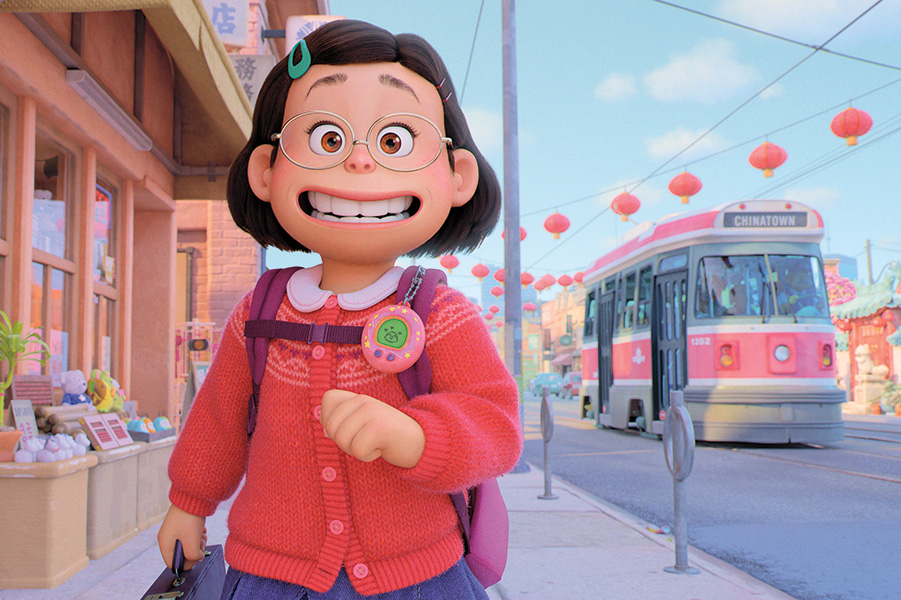 An American viewer had a strange question for Canadian director Domee Shi at a recent screening of footage from Turning Red.

“He wanted to know why there was a sign about bags of milk at a Daisy Mart store,” says Shi. “And I had to explain to him that in Canada milk comes in bags. All the Americans were, like, ‘Wow, that’s amazing! That’s so cool.’”

Bagged milk, Daisy Mart – those are just two of the dozens of details that Toronto audiences will lap up when they watch Shi’s debut feature, which hits Disney+ on March 11.

Just like her Oscar-winning Pixar short Bao, Turning Red is clearly situated in the GTA, where Shi grew up. From the SkyDome and the CN Tower to TTC streetcars going through Chinatown, the film features plenty of recognizable landmarks – whimsically transformed by Shi and production designer Rona Liu from photographs of the city.

“I miss the Asian food in Toronto,” says Shi, who’s now based in Oakland, California, on a Zoom call a couple of months before the film’s opening. “A lot of the Asian spots in the GTA can’t be beat: dim sum, and all those places my parents took me. I also miss places like T & T and Pacific Mall. Those types of stores are hard to come by over here.”

Turning Red tells the story of Meilin Lee, a sharp, confident tween in the early 2000s who’s obsessed with anime and boy bands and trying to escape the shadow of her overprotective mother. When she gets excited, she transforms into a giant, awkward red panda – a clever metaphor for going through adolescence.

“But many of the cringiest, most awkward moments in the movie are drawn directly from my own life. Like Mei, I had a secret sketchbook under my bed [which my mother found]. And on my first day of middle school, I also had the experience of catching my mom hiding behind a tree with sunglasses on to watch me. She was worried about me. I think those moments are what make the movie connect with audiences and make it feel real and funny.”

Turning Red’s Meilin Lee and her friends take in the Toronto skyline.

A mother also figured prominently in Bao, so the mother-child dynamic is obviously a subject that’s close to Shi’s heart. With her father often away for work, Shi – an only child – spent a lot of time with her mom, commuting together from the suburbs to work and school in downtown Toronto and going on mother/daughter bus trips.

“We’re definitely closer now,” says Shi. “We fought a lot when I was Mei’s age, when I was a teenager, and I think making this movie was a good opportunity to look back on those moments and try to understand what was going on from both sides. For me, hormones, puberty and change were involved – I was going through a lot of stuff and was projecting a lot of that onto my mom. But for her, and for the character of Ming in the movie, that paranoia and fear and overprotectiveness comes from a place of wanting to know your child is okay. So making both Bao and Turning Red, I’ve been able to understand her better.”

The fact that Mei’s mother, Ming, is voiced by Canada’s own Sandra It’s-An-Honour-Just-To-Be-Asian Oh is something Shi wanted from the start.

“She’s the queen – she is our unofficial Queen,” says Shi. “We should put her on the quarter. I felt like there was no other actor who could portray Ming. She just has such an incredible range. I’ve loved her ever since Sideways and The Princess Diaries and every single small role she’s been in. She’s always so funny but really nails those emotional moments, too, and that’s what we needed, someone who could switch from being sharp and domineering and intense to loving and sincere. Sandra can do all of that.”

Pursuing a career in the arts can be tough for those from Asian backgrounds. But Shi was helped by the fact that her father is also an artist. He was an art professor back in China and is a painter in Canada.

“I was always exposed to art, but it took him a long time to establish himself as an artist and he didn’t want me to go through that same struggle,” says Shi. “I had to convince my parents that animation would be a good way to be an artist and also have a nine-to-five job. I had to pitch them on it. I don’t think they were convinced until I finally got a job at Pixar. And now they’re cool with it. Now, they just want grandkids.”

And having won an Oscar helps a lot, too.

The timing of Turning Red couldn’t be better. In the past few years, big hits like Shang-Chi and Crazy Rich Asians have shown that films with Asian leads can succeed critically and at the box office.

“It feels amazing to be in such awesome company,” says Shi. “I don’t think our work is done, though. We have to continue fighting to tell these stories. Maybe I’m being pessimistic, but it could one day evaporate unless we keep fighting and supporting these types of stories when they come out in theatres or on streaming platforms.”

The stakes are even higher with the rise of anti-Asian violence during the pandemic.

“That’s made me feel that what we are doing is more important than ever,” says Shi.

“I feel this responsibility to share with the world and non-Asian audiences Mei’s life, her household and her community. One of the scenes I love most is a small scene near the beginning, where they’re at home and Mei is making dumplings with her mom and watching a Cantonese soap opera on TV. Her dad’s cooking in the kitchen in the background. It’s a small slice-of-life moment, but it was so cool that we were able to share this snapshot of Asian North American life and bring it to the world.”

Shi, a Sheridan College animation grad, won a three-month internship at Pixar back in 2011. She eventually worked as a storyboard artist on Inside Out, Toy Story 4 and The Incredibles 2 before making Bao. How did she manage to get her voice heard in the big company?

“I had to figure out early on what my superpower was,” she says. “I knew I wasn’t going to be the greatest draftsman. I didn’t know the most about films – I had only started [seriously] watching films when I began at Pixar; before that I was more into comics, manga and anime. But I knew I had a quirky, offbeat sense of humour. I could always approach story problems with an offbeat solution that not everybody in the room could think of. And that’s how I developed my voice – and my confidence.”

A week before our interview, the news breaks that Disney will be bypassing a theatrical release for a premiere on its streaming platform, Disney+.

“I have mixed feelings about that,” says Shi. “When we first started making the movie, we had every intention of having it seen on the big screen, collectively, with people together and breathing the same air in the same room. But with the realities of the world and the pandemic, our priority has shifted. Now we just want as many people to be able to watch it safely as possible.

“When I look back to why I got into animation, why I wanted to become a filmmaker, it’s to tell these stories and to reach an audience. And as long as we can do that, on whatever platform or medium, I’ll be happy.”