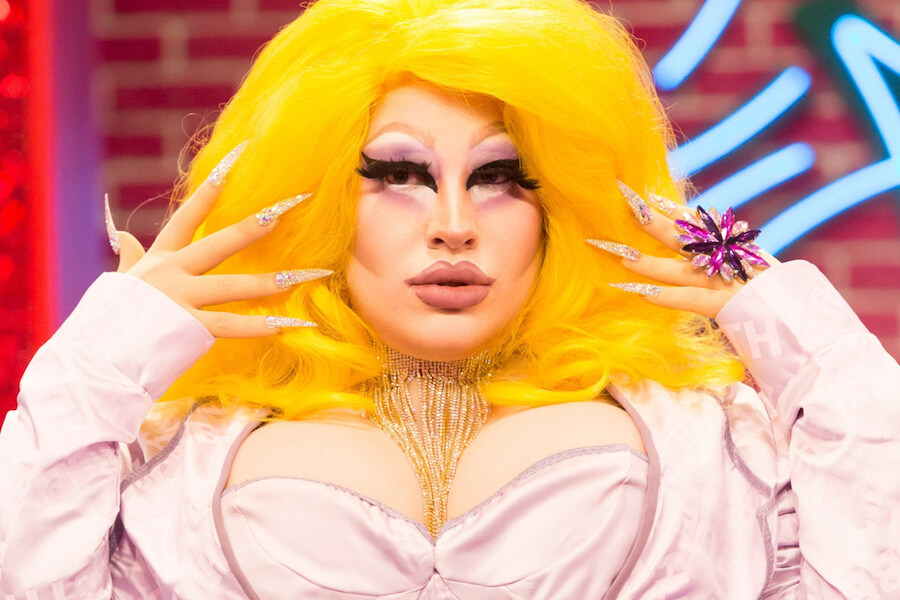 After a few months of behind-the-scenes chatter around the second season premiere of Canada’s Drag Race, the show has returned and focus has shifted back to what’s happening in front of the camera: looks, challenges, eliminations.

The first episode was similar to last year’s season premiere, with the new crop of 12 queens competing in an over-the-top mini-challenge that saw them diving into a pit of foam as guest judge and photographer Caitlin Cronenberg took snaps. The maxi-challange tasked the queens with designing memorable “lost and fierce” creations using left over items from the coat check.

Drag queen Brooke Lynn Hytes is at the centre of the judging panel now that the producers have apparently scrapped last year’s concept of having the weekly celebrity guest also serve as host. She was joined on the panel by Cronenberg and regular judges Brad Goreski and Amanda Brugel.

With the judging receiving so much backlash in season one, there was a clear and concerted focus on constructive criticism during the runway portion. Calgary’s Stephanie Prince, Montreal’s Suki Doll and Ottawa’s Icesis Couture brought the strongest looks, with Couture ultimately claiming the win.

Four of the contestants this season hail from Vancouver and two of them, Beth and Gia Metric, landed in the bottom.

Originally from Nelson, Beth is a Métis and Two-Spirit performer who started doing drag in high school before moving to Vancouver to up her game in the club scene.

The top half of her coat check look – a black bodice adorned with spray-painted pieces of Solo Cups – impressed the judges but the bottom half looked unresolved. The high-pressure situation that is Drag Race seemed to throw Beth off her game. She was unsure of what to do in the Werk Room, hesitating to select items for her outfit and belatedly realizing a partial vision on the day of the runway presentation.

It wasn’t enough, and Beth sashayed away after a lip sync to Nelly Furtado’s Maneater. She now joins the illustrious club of queens who are “first out” on Drag Race. Going home first is not the outcome Beth predicted, but strangely the face-off with Metric is something she says she envisioned weeks before production began.

How did you become a drag performer?

I started doing drag in theatre in high school. I was cast as Gertrude for a monologue called Gertrude Talks Back – I was playing Hamlet’s mother. My theatre teacher liked what I did with the role so much that she continued to cast me as female characters throughout my high school experience.

How did it make you feel to dress up and give that performance?

It was weird. I had just come out of the closet at that point too, so I was learning a lot about myself but I was excited and curious. I don’t like to say no to things. I try things and see where it takes me. It seems to have worked out for me so far.

How did the Beth persona we met on the air develop? You talked about defying categorization but your signature look is big – all the elements are exaggerated.

I love all drag. All drag is so valid but my favourite type of drag is wearing the most. The most exaggerated version of that feminine energy. I really admire Victoria Scone from Drag Race UK. She’s just so exaggerated – so big, so iconic.

Are there women in your life that you are referencing in your drag?

People always say I look like my mom, but my mom doesn’t look like a muppet. People may not realize it from the show, but Beth for me is a really strong, confident person. She might’ve had a weak moment on the episode but she is my armour and my strength and I really model her after all the strong women in my life, my mom included. She raised me and my three brothers by herself and that takes a lot of strength.

Let’s talk about the design challenge. You created a bodice that the judges loved. Do you have a lot of design experience?

I know my way around the sewing machine and I did have a hand in making some of the things I brought to the show. I don’t what happened there. I just got to the show, had a brain fart. I didn’t know where to start. I realized when I do get creative I take my time. I don’t like to rush it. I like to enjoy the process of doing makeup and styling wigs. I enjoy the whole process and that’s what I wasn’t prepared for.

How did you feel about the judges’ feedback? They talked about you having a lack of confidence but you seemed to handle the critiques and that whole portion of the show very well.

I could definitely see what they were talking about watching it back. In that moment, did I feel the most confidence I’ve ever felt? No. Can I sometimes come across as very quiet and reserved? Yeah. I like to come to life when I’m performing. The hardest thing to bounce back from is when someone questions your confidence. It’s so hard to be confident when someone is like, “You don’t look confident.” That comment definitely struck something in me.

I didn’t disagree with what they were saying at all. They didn’t love the bottom half of my dress and that was the night before when I had no idea of the direction I wanted to go in. I came in the next morning and created the top half of the dress and they loved it. I still have it. I almost got rid of it. I almost threw it out but the production was like, “You should keep it.” I kept it and I’m glad I did.

There are a lot of Vancouver queens this season. Off the top you mentioned that you were intimidated by Gia Metric and then had to lip sync against her. How did that feel?

It was weird. Do you want to hear something spooky? I think I’m a witch. Going on the show we all hear rumours about who might be there. Gia’s name had been brought up. I didn’t for sure expect her to be there, but two weeks before leaving I remember Maneater was playing in the salon at my day job. And I turned to my coworker and said, “Watch me have to lip sync to this against Gia.” No word of a lie. I have someone who can vouch for me that I said that. When I saw Gia in the Werk Room, I was like this isn’t actually gonna happen is it? And then it happened. I wouldn’t say I was intimidated by Gia. She’s an intimating person but you can’t really compare our drag.

The Vancouver drag scene is so diverse. We have such a large variety of performers here and there’s so many opportunities for you to learn and grow here. When I was in Nelson, I had no one to look up to and to learn from. Moving to Vancouver allowed me to elevate my drag, learn different things and I don’t think I would have gotten on Drag Race if I didn’t have that opportunity to come here and grow.

What are you focused on now?

I have never left Canada so I’m so excited to bring Beth to the world and show her off. I’m proud of myself for getting this platform and I want to use it as a diving board for as much as possible. Anything that comes my way I’m going to say yes and see where it takes me.

Is going home first something you were mentally prepared for?

The first episode is traditionally a sewing challenge so I was like, I won’t go home first. But I said if I were to go home first it would be fine. It would be about getting there and experiencing it. But I’m not gonna lie to you: it sucked. It wasn’t a good feeling. It took a long time to be okay with but now I’m okay with it. The way I look at it now is it’s just a lot less opportunity to make people hate me on TV. [laughs]

This interview was edited for length and clarity. Watch our conversation with Beth in the video below.