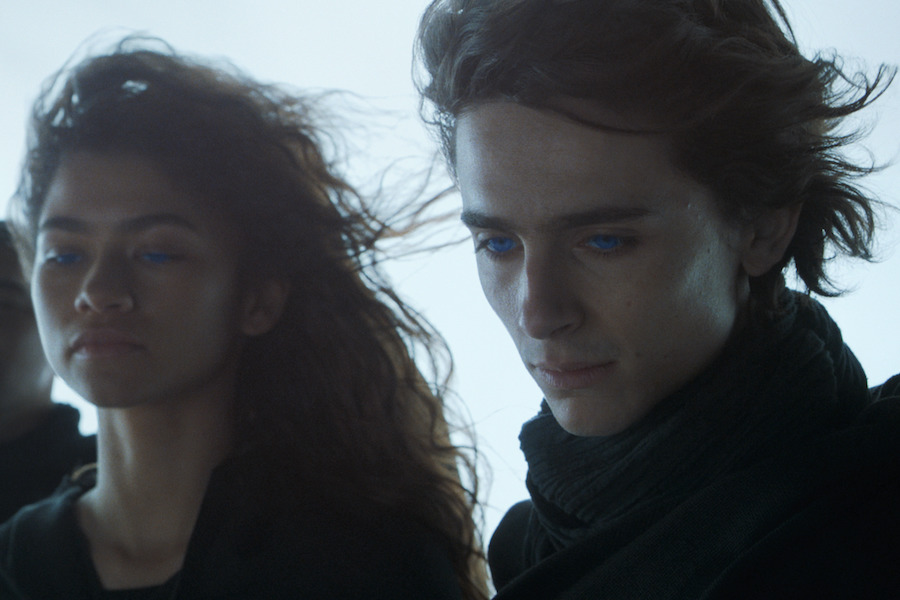 A funny thing happened while I was watching Denis Villeneuve’s Dune just before its TIFF premiere last month.

I realized that Frank Herbert’s landmark 1965 sci-fi novel, which tells the story of a young noble who comes to the desert planet of Arrakis and winds up organizing the indigenous Fremen in rebellion against the empire he was meant to represent, is effectively the same story of T.E. Lawrence… the subject of one of my all-time favourite movies, Lawrence Of Arabia.

The day after Dune touched down at the Ontario Place Cinesphere, I got to ask Villeneuve about that. And yep, any resemblance to David Lean’s 1962 classic is completely intentional.

“At the end of the day, in Lawrence Of Arabia, the tragedy of Lawrence is that he realizes he has been an instrument of colonialism all the way,” Villeneuve says. “The thing I like about Dune, what it makes it relevant and important for me [as a project], is that it’s not an apology for the savior figure, it’s really a criticism. Paul Atreides is the antihero… he’s someone who’ll bring calamity to the world, who’ll bring chaos to the world. His love for Fremen culture will be something that will be dreadful, and bring hell to them. That kind of tragedy is what makes [Dune] relevant.”

Unlike previous adaptations of Herbert’s books, Villeneuve’s version draws a clear line between the nobles of House Atreides and the indigenous Fremen in its casting: the natives of Arrakis are played by a diverse collection of actors, among them Javier Bardem, Sharon Duncan-Brewster, Babs Olusanmokin and Zendaya.

The off-worlders representing the Galactic Empire are cast almost entirely with white people, with Oscar Isaac, Chang Chen and Jason Momoa the only outliers. Most interesting, Momoa is playing the larger-than-life Duncan Idaho, whose ability to cut through the formal jabber of the ruling class instantly makes him the most enjoyable character in the picture. I asked Villeneuve if he cast Momoa in that role as a commentary on the otherwise unbearable whiteness of the ruling class; the director says it was just a perfect fit.

“I needed that kind of charisma, that kind of energy charge, that boost,” Villeneuve says. “Duncan Idaho, in the book, is known to be one of the best fighters, but also someone with a tremendous charisma. In French [we would call him] l’aventurier, the true hero figure, and I needed someone that could bring that kind of boost and solar energy, the drive … it was a tremendous pleasure to work with Jason Momoa; what you see on screen is also what you have in life. And frankly, having Jason’s enthusiasm on a daily basis really helped me go through the making of this movie. Because it was really a marathon.”

It’s a beautifully designed marathon, the world of Arrakis influenced by North African structures and clothing. There are moments when Dune resembles Villeneuve’s 2010 breakout Incendies, and I ask if the resemblances are intentional.

“I tried to bring the world to the screen like I dreamed about it when I read the book,” he says. “Good science fiction is science fiction that is either a mirror or a criticism of our reality. And that’s what I tried to do with this.”

Villeneuve’s vision of Dune is also in conversation with another Canadian filmmaker’s sci-fi debut: Danis Goulet’s dystopian thriller Night Raiders is very much a colonization narrative told almost exclusively from the perspective of its colonized characters. Villeneuve had yet to see Goulet’s film when we spoke – though he was looking forward to catching it – but he says that Dune: Part Two will definitely expand on that theme.

“When you do a movie in two parts, it means that you know where you’re going in the second part,” he says. “And that second part – if ever I have the chance to do it – would be the more exciting [one] for me to make. We’ll go deeper into the characters’ psyches, and much further into the subject of colonialism. So I hope I’ll have the chance to do it.”

Watch the interview on NOW’s YouTube channel, or directly below: