Even with Jason Momoa's lively presence, Frank Herbert's novel once again resists a satisfying screen adaptation – but it sure looks great 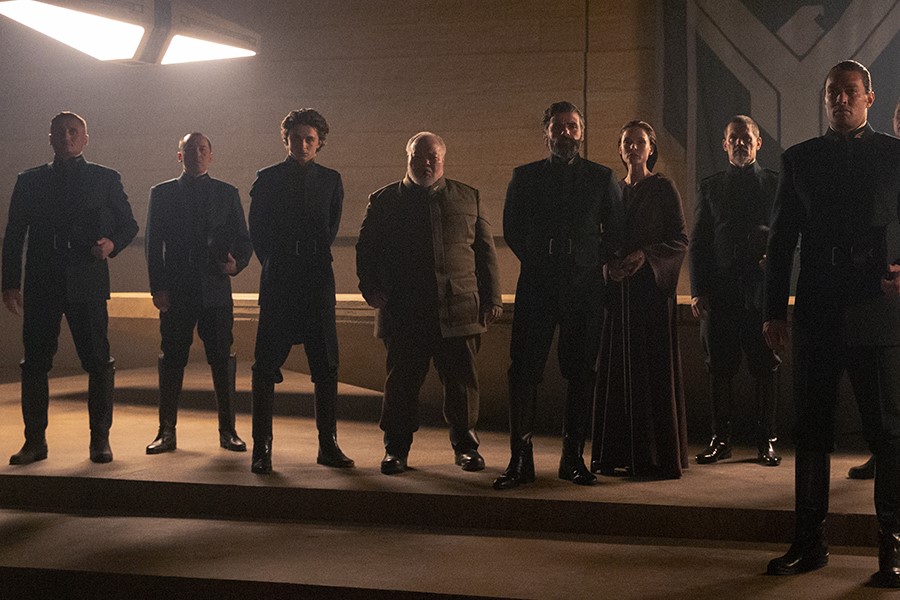 All right, it’s time to tackle Dune. You’ve heard about Denis Villeneuve’s years-in-the-making, super-ambitious adaptation of Frank Herbert’s revered tale of warring houses, all-knowing religious orders, messianic prophecies, giant sandworms and the untested young man who becomes the leader of an oppressed people bent on reclaiming their world from the colonizers stripping it for their own gain, right?

The movie – a very, very large one, ostensibly the first of two – touched down at the Cinesphere Saturday night for a special-event screening. There’s another screening on Sunday night (7:30 pm at the Cinesphere) with two more scheduled in the coming week, and they’re among the hottest tickets of the festival.

The casting is also interesting. Timothée Chalamet, slight but squared-off, is probably the best choice for young Paul Atreides, the callow, sheltered youth destined to join the Fremen of Arrakis and lead them in a guerilla war against his own empire. Oscar Isaac and Rebecca Ferguson are a fine match as his parents, Duke Leto and his concubine Jessica. Herbert’s dated power dynamics are barely acknowledged by Villeneuve and co-writers Jon Spaihts and Eric Roth, which is probably the best way to handle them.

Josh Brolin and Jason Momoa weave in and out of the story as Gurney Halleck and Duncan Idaho, the warriors who serve as Paul’s trainers and mentors. Momoa turns out to be a damn ray of sunshine, his naturalistic performance breaking through the stolid formality in which the film is draped. And Zendaya is around, sort of, as a mysterious woman Paul keeps glimpsing in his dreams of a sparkling desert planet where his true destiny lies.

But before he can meet her, he must survive a battle between House Atreides and the former lords of Arrakis, the debauched House Harkonnen, whose loathsome Baron (Stellan Skarsgård) wants the planet back and is more than willing to slaughter the entire Atreides clan to get it.

Soon enough, Paul and Rebecca must seek shelter with the planet’s original inhabitants, the Fremen – who are, in Villeneuve’s most effective metaphor, portrayed in this film exclusively by people of colour – while the Harkonnen hordes close in.

Initially, Villeneuve’s awe-soaked sci-fi thing – which gave Arrival and Blade Runner 2049 their sense of grandiose wonder – feels like a good lens through which to view Herbert’s story, which is filled within elaborate ceremonies and characters who deliver self-important lectures about familial honour and duty. Everything feels respectful and considered, but in the end, the filmmakers’ respect for the material is what smothers the film they’re making.

The problem with Dune is that any truly faithful adaptation can’t work as a movie. Herbert’s philosophy and labyrinthine mythology simply take up too much space, pushing the genuinely thrilling moments too far apart to build any kind of storytelling momentum. Alejandro Jodorowsky was perfectly fine with the idea of making a 12-hour movie, though no one else was.

David Lynch’s 1984 adaptation compresses the entire first book of the trilogy into about two and a quarter hours and moves so quickly that it’s almost incoherent. Villeneuve spends two and a half hours on the book’s first half, laying pipe that will presumably pay off in the much more interesting conclusion. And that makes for a very, very slow film, even with all the assassins and firefights and explosions and, yes, the sandworms.

No one complains about The Fellowship Of The Ring or The Two Towers feeling incomplete, but that’s because Peter Jackson built clear narrative arcs within the structure of each film. Dune: Part One is an IOU, basically, and for fans of the books it might be enough. But for those of us who don’t regard Herbert’s novels as scripture, it just hangs there, suspended in its own gravitational pocket like one of Villeneuve’s star cruisers. The desert defeats everyone.

I’m not sure I’m allowed to review Bent Hamer’s The Middle Man (4 pm, TIFF Bell Lightbox 3, digital premiere Monday at 5 pm) just yet, so let me just say that no other movie this year will offer quite the same experience as Hamer’s bone-dry comedy about a young man who takes a job breaking very bad news to the residents of his incredibly unlucky town.

I’m also fuzzy about where things stand on All My Puny Sorrows, so I’ll just say Sarah Gadon and Alison Pill are perfectly cast in Michael McGowan’s adaptation of Miriam Towes’s novel.

And there’s plenty more, including premieres from two of my favourite English filmmakers Terence Davies and Clio Barnard.

But the two screenings I’d love to be able to attend in person are Penny Lane’s Listening To Kenny G (6 pm, Scotiabank 1; digital premiere at 5 pm) and Michael Showalter’s The Eyes Of Tammy Faye (9:30 pm, Princess Of Wales; digital premiere Monday at 5 pm), just to see how they play with a live audience. Check back later tonight for my review of The Eyes Of Tammy Faye, because embargoes are dumb.

Apitchatpong Weerasethakul’s Memoria plays the Cinesphere; Viggo Mortensen does a digital talk about making David Cronenberg’s Eastern Promises as part of this year’s TIFF Rewind series; Dan Stevens plays a German sex robot (with a British accent) in Maria Schrader’s thoughtful sci-fi comedy I’m Your Man; Mia Hansen-Løve’s Bergman Island pairs Tim Roth and Vicky Krieps as married filmmakers struggling with stasis; and Eric Warin and Tahir Rana’s Charlotte is an animated adaptation of a tragic Holocaust story, with Keira Knightley voicing German-Jewish painter Charlotte Salomon, who used her art to cope with the horrors closing in around her.