Other uses for a movie screen

Should you drop $29.95 to watch the Games on the big screen? 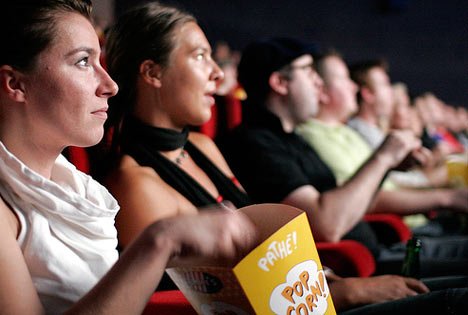 With high-definition digital projectors being installed on more and more megaplex screens – all the better to screen movies in Real 3D – said megaplexes are coming up with new ways to utilize those screens.

HD simulcasts of operas, concerts and wrestling matches have been a lucrative side business for a while, but the technology’s improved so much in the last couple of years that it’s now possible to pitch short runs of ephemeral product. On the heels of last fall’s Michael Jackson memorial, This Is It, Sony’s got a Celine Dion concert movie, Celine: Through The Eyes Of The World set to begin a limited engagement on Wednesday. (Be afraid. Be very afraid.)

On a more ambitious (and culturally relevant) note, Cineplex will be screening CTV’s coverage of the Winter Games on select digital screens across Canada for 17 straight days. It’s set for the Scotiabank, which just wrapped up a week-long digital film festival the Sheppard Grande, the Mississauga Coliseum and the Queensway are also booked.

$9.95 buys you access for a whole day – with “complete in-and-out access”, suggesting you can break for dinner at Milestone’s when the speed-skating heats grow tiresome. Or you can drop $29.95 on a “passport” that’s good for the entire run of the Games. And you get to experience the coverage with a (presumably) boisterous crowd, on a screen that’s considerably larger than whatever you’ve got at home.

Cineplex isn’t the only game in town for tonight’s opening ceremonies, by the way the Bloor Cinema will be also screening them, starting at 9 pm.

I’ve been offered the chance to experience cultural events this way a few times before – the Oscars, the Battlestar Galactica finale, Barack Obama’s inauguration – but I’ve always preferred to see that sort of thing in a more intimate surrounding. At a friend’s house, maybe, or having friends over to mine. The programming is exactly the same, after all.

One of my favourite memories of the ’90s is watching Donovan Bailey win his gold medal at the ’96 Atlanta Games with a dozen people in a Queen Street apartment a year later, many of the same people were there to watch Mike Tyson try to eat Evander Holyfield.

Would the experience have been the same in a 500-seat auditorium? Probably for Bailey’s win, which had the whole room breaking out in an eruption of joy. But the Tyson-Holyfield fight would have played very differently, I think. A theatre discourages conversation too many strangers, too many opportunities to be misunderstood. A living room is more convivial.

And you don’t have to have dinner at Milestone’s.[rssbreak]