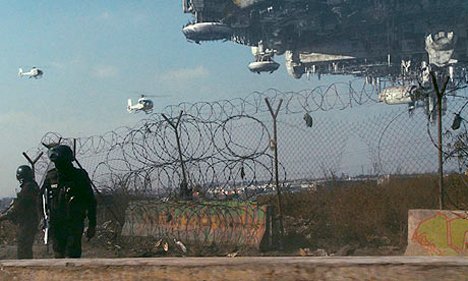 District 9 has so much potential and seems ready to engage with so many ideas that it’s disappointing when it turns out to be nothing more than a decent action movie.[rssbreak]

Unsure how to respond, the government cloistered the aliens in District 9. Two decades later, the area has become a slum, rife with despair, corruption and violence. It’s like the favelas of Rio, only the residents speak in unintelligible clicks and hisses and treasure cat food as a delicacy.

The movie maintains its documentary guise as it jumps forward to 2010, when the corporation that’s been managing District 9 for the South African government is about to resettle the aliens some 200 kilometres outside Johannesburg, putting the problem out of sight of the intolerant human population.

That’s where the story really starts, with a clueless civil servant (Sharlto Copley) stumbling across a valuable piece of “prawn” technology and becoming the subject of a massive manhunt. And it’s at this point that all the bristling allegorical tension is just thrown away so Blomkamp can plunge headlong into the action.

This action stuff is pretty great, I’ll say that. Individual sequences are thrilling and visceral, filling the frame with nifty alien weaponry and high-tech splatter, and even though Blomkamp abandons the documentary concept somewhere in the second reel, he sticks with the hand-held verité sensibility. This makes District 9 even more impressive as a study in filmmaking in terms of marrying live-action footage to elaborate CGI, it must have been even more difficult than Cloverfield.

But as satisfying as District 9 may be as an action movie, it sets a conceptual bar for itself that it just doesn’t clear. The alien culture hasn’t been terribly well thought out, and the human characters aren’t well-developed either. Copley’s weedy hero is the only person in the picture, human or alien, who’s given anything resembling an identity.

The apartheid allegory doesn’t really work either, since District 9’s alternate history implies that there was no racial trouble in South Africa until the aliens arrived. Several of the interview subjects in both the 80s and the present day are black, and the angriest invective levelled at the “prawns” comes from black characters. There’s certainly no suggestion that blacks and whites have any kind of contentious history.

The movie’s most profound racial statement can be found in its depiction of Nigerian black marketeers as exploitative, superstitious thugs – which suggests to me that Blomkamp really likes Predator 2. I can dig that it’s a sci-fi shooter with no pretensions to deeper meaning.

Sometimes that’s all you need.