TV review: Queer Eye season 5 made me over from skeptic to teary-eyed fan

As the Fab Five head to Philly, their lessons in self-love and self-worth feel more urgent than ever 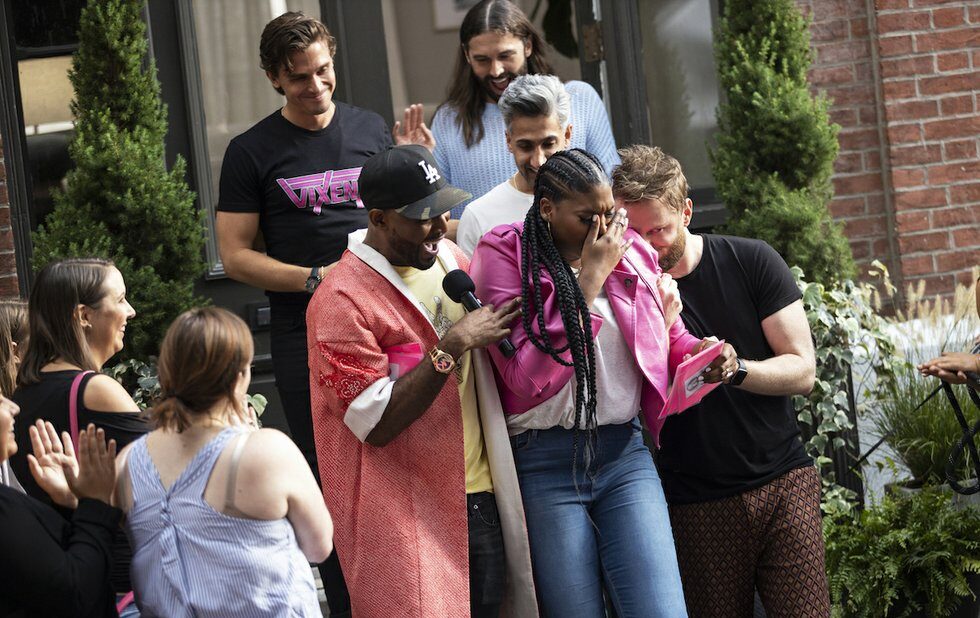 I avoided Queer Eye because it’s one of those gay shows that everyone watches. But after watching season five, I realize I’ve been missing a TV revolution.

Netflix’s reboot of the mid-aughts makeover show Queer Eye For The Straight Guy falls into a programming category I call Shows With Gays For The Straights: gay men doing stereotypical things like drag, fashion and makeup with a focus on betterment. On a basic level, these shows rely on gay tropes while glossing over complicated emotions and issues lying beneath the fabulousness. Disarming gay TV characters are acceptable as long as no one feels threatened. And because every other show seems intent on ticking the queer box, I tend to be hypercritical of queer characters and their story lines.

But Queer Eye is not Queer Eye For The Straight Guy. For those who haven’t yet been indoctrinated, the show is very loosely a makeover in which five experts known as the Fab Five – Canadian Antoni Porowski (food and wine), Bobby Berk (design), Jonathan Van Ness (grooming), Tan France (fashion) and Karamo Brown (culture) – set out to improve the self-image of an “ordinary” American.

I first became aware of how intensely people adore the new Queer Eye last month when I joined my partner and their friends to play Jeopardy on Zoom. Queer Eye had a category alongside coronavirus puns and rice (we’re all from Asian, rice-eating cultures). We had to match Queer Eye quotes from season one to four with their speaker. Not only was I unable to assign the quotes, I wasn’t even able to name the Fab Five (other than Tan, who I called “Tan Fran”).

I decided to give season five a try while making dinner, but between the one liners and tears I needed to pause so I could watch with full attention. Queer Eye isn’t a cliched regurgitation of flamboyance and stereotype.

This season, the Fab Five head to Philadelphia, America’s sixth largest city. Known as the city of brotherly love and as the birthplace of America’s 1776 Declaration of Independence, the setting is ripe for subversive cultural commentary. The heart of the series is still the way the Fab Five interact with the contestant. Yes, the transformations revolve around fashion, grooming and food, but they are designed to shift something much deeper inside the psyche – a lack of self-worth, which leads to self-care and self-love.

Each episode dives deep into not only the life of the contestant, but also a wider issue that they represent. These range from serious issues like immigration and intergenerational cultural conflict to dating as a single dad and the lack of self-care practised by a mom who is focused on her husband and kids.

In the first episode, Pastor Noah is struggling to keep his progressive congregation together on the eve of their 125th anniversary. He didn’t come out until he was in his 30s and his uniform of cargo shorts is a reflection of his self-worth, having been raised in a deeply homophobic Christian tradition. Not only do the Fab Five revamp his wardrobe, image and home, they connect him with other gay pastors who help him confront rejection and internalized homophobia. So that when he stands in front of his congregation and speaks for them in their community, he is bringing his whole self.

Jennifer from episode seven is a Polish-American mom who’s been neglecting herself in order to care for her grown daughters and husband of 24 years who lives with ALS. Tan and Derek set out to update her 80s aesthetic (she wants a perm), Antoni who is also of Polish lineage, shows her how to make her grandmother’s food while Karamo helps her understand that she should live in the moment rather than in fear of tomorrow. When she says “I see me,” I could feel her cloud of pain evaporate. There was something really peaceful about watching Jennifer’s Catholic family frolic with a bunch of gay guys.

In the ninth episode, Dr. Yi is a Korean-American who’s moved into a new home with her stay-at-home husband and young child, and is about to start her first job as a pediatrician. At the same time, she’s regretful of all the time she’s missing with her daughter. Her makeover takes her from undergrad with a pragmatic high ponytail and cutesy jersey dress to a professional expert, in fun tuxedo dresses and pant suits. The most striking and relatable moment of the episode occurs when Dr. Yi and Tan France, a fellow child of Asian immigrants, have a conversation about body image via the parental expectation to be a doctor, lawyer or accountant. He asks how she feels about her body and what parts she hides. What’s revealed is that the ways in which she hides her body reflect how she hides aspects of her personality and what she wants out of life.

Yes, Queer Eye is a makeover show. It’s also about queer guys doing what they do best: upgrading. But on a metaphorical level, Queer Eye is an exercise in patriotism in the cast imagining the values they want to see associated with America at a time when the country is locked in culture wars. It’s not just about making one person greater. Five guys visit ordinary people, uncover their traumas and self-worth and forge a commitment to self-love. The audience can experience the transformation too. And from my perspective, learning the benefits self-love not only makes each person be better, but is the definition of being greater.